action potential in every cell of the human body

I understand that the action potential represents a potential difference variation (depolarization) of the voltage across a cell membrane. This concept is generally presented in the context of nerve cells (neurons) as the change in potential across the axon membrane. What about the membrane that separates the nucleus of the neuron from cytoplasm of the neuron? Is there any action potential there?

Additionally, is there an action potential involved in the activity of other types of cells in the human body that are not neurons and don't have axons as part of their structure?

An action potential is different from having a membrane potential.
The membrane potential is just a voltage difference across the membrane.
When it changes rapidly due to a voltage sensitive channel opening (at some threshold), then its an action potential.
The voltage sensitive nature of the channel lets the voltage change rapidly spread to other areas of the membrane and of the cell. That's called active conduction.

Membrane potentials are common in all cells as far as I know.

The mitochondrial have an membrane potential (due of H+ differences) which is involved in ATP production.
Nuclear pores are holes through the inner and outer nuclear membranes where the two membranes come together. The nucleus's interior is therefore continuous with the cytoplasm due to the nuclear pores. This amounts to electrical continuity, so there shold not be much of a potential difference between the two areas. 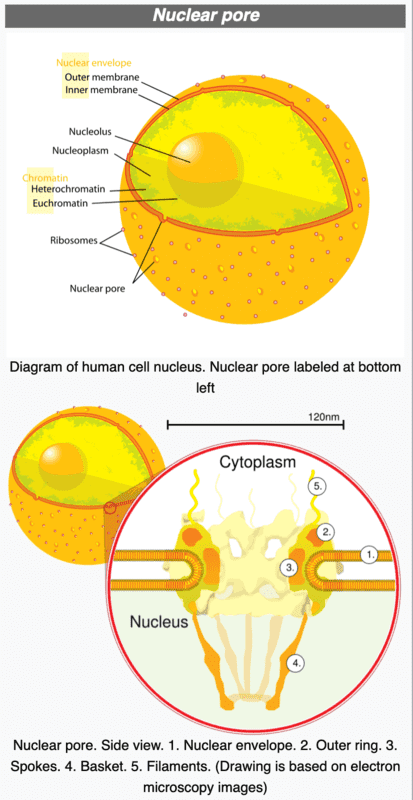 On the other hand, the space between the two nuclear membranes might have a potential difference with respect to the cytoplasm and nucleus. I don't know this.

The cnotrol of ions going across memebranes is also important in kidney function.
fog37

Thank you. So neurons and muscle cells have action potentials but other cells in the human body not...

I am trying to identify some of the electrochemical activities involved in the human physiology to understand how much of what we are is based on electromagnetism and its concept. I guess everything is fundamentally electromagnetic since all the molecules and atoms essentially exist because of electromagnetic interactions...

We have electric potential differences across cells' membranes, voltage waves in neurons and muscle cells (fibers? are they the same thing?)....Do we have any electric currents flowing inside of us? What other electrical things do we have going on?
BillTre
Science Advisor
Gold Member

There are cases (like the fertilization of certain eggs) were a large inflow of Ca++ flows in and and prevents fertilization of the egg cell by a second sperm cell (which would be bad for the zygote).

After the amputation of limbs, stuff leaks out, and so does a current. In some of these animals regeneration can happen (salamander) and some it doesn't (frogs). The salamanders (which regenerate) have their current going through the full cross section of the stump (after bleeding has stopped). In frogs (which don't regenerate, most of the current leaks out through the space between the skin (which is loosely attached to underlying tissues) and the underlying tissues of the limb (muscle bone/cartilige, blood vessels , et.).

There is a special probe for measuring these currents, the vibrating probe (no seriously!).
atyy
Science Advisor

fog37 said:
So muscle cells don't have axons like neurons but still "communicate", if that is the term, among each other using action potentials.

Almost all muscle cells don't have axons, but there are some in some unusual species that project branches out from the muscle cell body to contact motor neurons (the neurons that tell the muscles when to contract). There are quite usual. Some consider them to possibly be an ancestral state left from before the now normal situation evolved.

Vertebrate striated muscle cells are a kind of default model (well studied and popular with humans).
There many be some cases where muscle cells communicate among themselves, but not common.
The (human perceived) reason (usually interpreted as the adaptive reason something evolved) for muscle cells to have action potentials is to achieve rapid and reproducible contraction in response to an incoming motor neuron action potential. It involves coordinating actions within cells.
Here is a general sequence of events (for a striated vertebrate muscle cell) which involves different kinds of action potentials in different steps:
The Ca++ triggers muscle concentration by binding to proteins involved in the contraction mechanism.

Ca++ is one of several common second message systems cells can use. Some are based on biochemically made molecules inside the cell. Ca++ can be released from internal stores or from extracellular sources and is driven into the cell by electro-physiological mechanisms.


fog37 said:
As far as neurons, my understanding is that they come in different types and are all interconnected (neural networks) to exchange electrical signals throughout the body. The nervous system (CNS + PNS) is such that there are neurons throughout our body, in our hands, eyes, etc., correct? For example, in the case of the sense of touch, the so called sensory receptors are simply the dendrites of sensory neurons that collect information from skin cells. These sensory neurons must be right under our skin, connected to skin cells, I would think.

Yes, there are many different types of neurons. They can connect to lots of other neurons, but those connections are not random. Neurons of a particular type will tend to connect to other particular neurons, not just to any neuron.
This is one of the great issues of developmental neurobiology, how the specificity of neural connections develops and is maintained.

There is a lot of variety in sense receptor cells and their transduction methods. As i recall, pain sensors are just free nerve endings, while skin pressure sensor cells are separate cells that from the Pacinian corpuscle which then sends a signal to a sensory nerve process which goes to the CNS. Similarly, taste sensors are separate cells from the nerve cells that innervate them, while, smell (olfactory) sensors are branches of actual nerve cells in the olfactory bulb (in the CNS). Its quite a mix.

Many but not all sensory cells are thought to have been derived (in evolution) from ciliated cells of some kind. Examples would be hair cells (lateral line (aquatic vertebrates, sensing vibrations in the water), ear (hearing), ear (balance), photoreceptors, possibly taste or olfactory cells.
There are also plenty of under appreciated internal sensing cells, like blood pH and pressure.


fog37 said:
A nerve is just a "pipe" that channels axons from different neurons and leads them towards the CNS from other areas of the body, correct? The term "muscle fiber", I believe, is synonym with muscle cell, correct? I read that he striated cells of cardiac and skeletal muscles are referred to as muscle fibers.

If you mean nerve as used to describe macroscopic anatomical feature containing may nerve fibers, then yes.

Many people use the terms fiber, process, or project for branches of nerve cells where it might not be exactly clear whether you are talking about an axon or a dendrite, or in cases where the process might not fall into the traditional meaning of those words (lots of unusual cases in the world of invertebrate neurobiology).

In most cases EKG will be seeing signals from large numbers of muscle cells that sum together where the electrodes are placed.
I don't know a lot about EKG (measuring heart activity), but the similar in the EEG, the measurements would be taken with respect to a single ground electrode at other some location.
There can be large numbers of sensing electrodes, giving more readings in parallel and providing some different in the locality of where the signals are coming from. This gives multiple traces.
Large neurons (with large axons, or larger muscle cells) provide disproportionately large signals to the electrodes, so the signal is a biased sample of local cells.
zoki85

Question: Can a symmetric 100 kHz sine current delivered to path hand-hand cause any neural response in human tissue (like tingling), except sensation of warmth during enough exposure, at low duty cycle and rms value 1 A ?
Last edited: Mar 20, 2020
hutchphd
Science Advisor

Effortless actions of a human being

Are human actions part of evolution?
2

How many atoms in a human cell?
2

How do human cells oxidize?