Unique Fingerprints of Alternatives to Inflation in the Primordial Power Spectrum

"The leading hypothesis about the universe’s birth — that a quantum speck of space became energized and inflated in a split second, creating a baby cosmos — solves many puzzles and fits all observations to date. Yet this “cosmic inflation” hypothesis lacks definitive proof. Telltale ripples that should have formed in the inflating spatial fabric, known as primordial gravitational waves, haven’t been detected in the geometry of the universe by the world’s most sensitive telescopes. Their absence has fueled underdog theories of cosmogenesis in recent years. And yet cosmic inflation is wriggly. In many variants of the idea, the sought-after ripples would simply be too weak to observe." 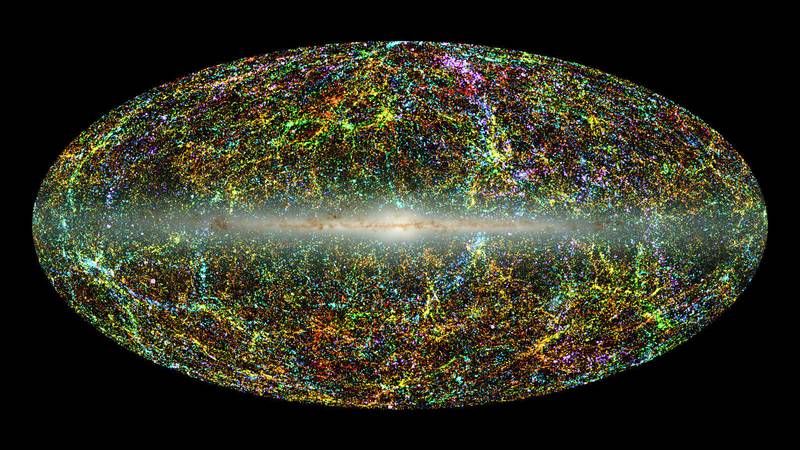 An all-sky map of the local universe derived from the 2MASS Extended Source Catalog of more than 1.5 million galaxies. The Milky Way is shown at the center, and other galaxies are color-coded by their distances, obtained from several different galaxy surveys.

Potentially interesting, but for now it's just a data analysis methods paper. I'll be curious to see it applies to actual data, to see if the signal is actually detectable given reasonable models.
Share:
Share

Related Threads on ...Alternatives to Inflation in Primordial Power Spectrum

S
Power of inflation in relation to expansion

F
I VSl as an alternative to cosmic inflation