Are the axes of celestial objects parallel in a galaxy?

Speaking only of approximately spherical moons, planets, and stars (not asteroids), which rotate about their axis, are the axes all pointed approximately the same direction?

It's only approximately true for planets in a solar system and moons around planets - but there's plenty exceptions, even just in our solar system (most notably Uranus).

Otherwise it's random. (e.g., solar system's angular momentum axis is 'tilted' ~60 degrees off the plane of rotation of the Milky Way; similarly, there's no pattern in observed exo-systems)

The reason for approximate alignment in the first two cases is due to how bodies in a stellar system generally coalesce from one large molecular cloud spinning roughly in the same plane (due to the dynamics of collapsing gas clouds).
However, there's plenty of 'chances' for bodies formed this way to be later kicked out of this alignment. Collisions, orbital capture, orbital ejections - all act to randomise movement patterns.

On larger scales, the difference between the radius of rotation of a system (such as a galaxy, or a group of galaxies) as compared with the size of the area undergoing collapse to form a rotating object is too large to have any effect - in a similar way to how the Coriolis force can cause continent-spanning cyclones to rotate in a preferred direction depending on which hemisphere it occurs on, but it doesn't matter for the direction of water draining in your sink whether you're in Alaska or Australia (because local interactions dominate the evolution of the system).
davenn
Science Advisor
Gold Member
2021 Award

lw1990 said:
Is it true for galaxy vs galaxy? Are they oriented in approximately the same axis?

have you ever looks at a deep sky image of many galaxies ? maybe not, as if you had, you wouldn't have asked that question 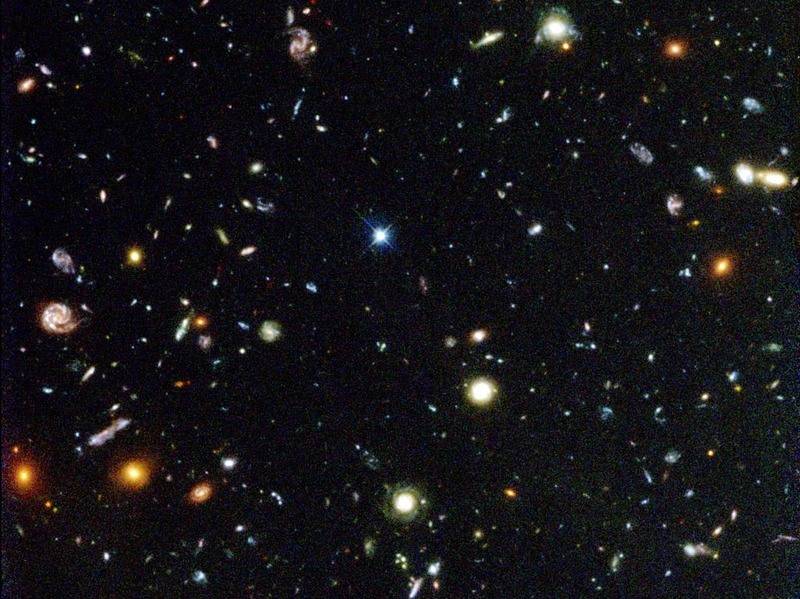 at all sorts of angles

Even within the solar system planets and other objects are not all orientated in similar ways.
Planets don't orbit the sun in exactly the same plane, only approximately so.
(and the orbital plane of Pluto, technically a dwarf planet nowadays, but still a substantial object, is way out compared to the main planet orbits.)
Polar orientation in relation to it's orbital plane differs widely between planets, Earth has tilt 23 degress and Uranus is an extreme case of 98 degrees, so its spinning sideways in relation to it's orbit.
Venus for some reason unknown rotates backwards as compared with other planets, (best guess is that it's even more extremely tilted than Uranus, effectively it has been turned upside down by past gravitational interactions.)
Last edited: Jun 2, 2016
Share:
Share

Related Threads on Are the axes of celestial objects parallel in a galaxy?

Data on the Velocity of the Celestial Bodies Orbiting a Galaxy

How do they calculate how fast celestial objects are moving?

About the size, brightness and distance of celestial objects

I How to find the position of a celestial object in the sky?

Do Celestial Objects Compete for Matter?

Motion of celestial objects in Spacetime looks circular in 3D how?

I Are all the celestial systems in the universe on a big plate?