Atlantic Inflow to the Arctic Basin via Pacific Inflow 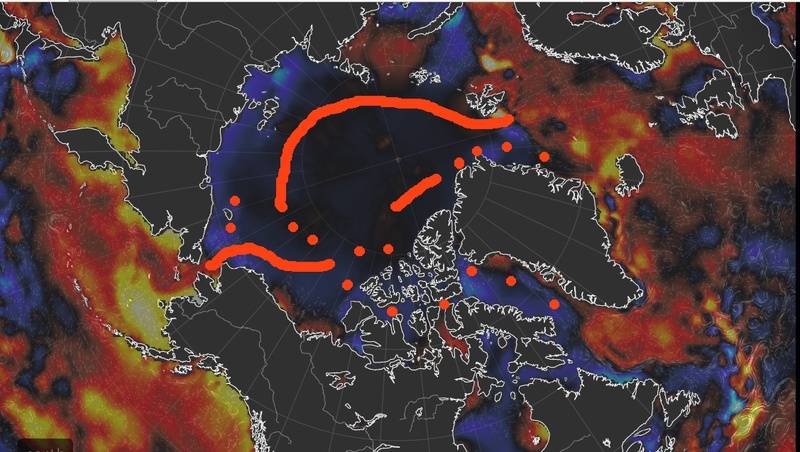 Inflow from the Pacifc the main flow show drifting east and a general value 0.8-0.9 sverdrup containing 10-Tw/winter, 20-Tw/summer heat-flux of less dense water from freshwater runoff creating a head-height of 40-50cm helping to melt sea-ice from below.

This flow contributes to outflow to the Atlantic along with a new freshwater and atmospheric pattern now exacerbated by a large cyclone over the Beaufort, being an inflow this creates a circulation behind the "waterfall" to bring in Atlantic water from the eastern side.

The bathtub analogy a tub full to overflow and you add a hose to the far end offset from center, that creates a circulation to the outflow, stop the hose the circulation dies.

This has critical thermal implications for cooling the planet without regard to emission controls.

timallard said:
This has critical thermal implications for cooling the planet without regard to emission controls.

And what are those implications?
timallard

Drakkith said:
And what are those implications?

Most of them are positive and needed to slow what's called the sea-ice bluewater event, that's to me the tipping point of runaway feedbacks already in place the critical part.

The evidence is "rotten ice" now being the main type in the Beaufort where 4-9 year-old multiyear ice was previously 40%, what ice is left is not structural shown this season when the Beaufort broke up early from winds creating the giant leads, that made earthobservatory's iotd, this following voyages to core and get properties for the rotten ice by Applied Physics Lab, Unv Washington, spring last year & fall with a bunch of other teams.

During that voyage a storm came up and new ice was forming, the teams put out a series of buoys to record a freeze-up and the next day all the ice was gone! ... it had been melted from mixing up a warm layer 20m down, this to me a thermal-mass built up from seasonal heat not radiated back to the sky in fall has become the Beaufort Blob, it's above the Atlantic warm water layer so they likely will interact from eddies a hunch, implies more ice melting events from upwelling, today with polynyas near the Kara & Laptev Seas in recent years where none before observed.

To have Pacific water enter does three bad things: 1) It's fresher and warmer than the Atlantic-Arctic water so stays near the surface still too warm for ice so melts it from below, transports 10-Tw/winter, 20-Tw/summer annually in heat. 2) Having an inflow source of such high volume, 5-Amazon rivers, forces a circulation in the Arctic basin pulling in more Atlantic water than would otherwise happen. 3) From the warm current sea-ice is lost first in Bering Straits and freezes up last thus it's a key to losing the ice seasonally in the Chukchi & then Beaufort enhancing the growth of the blob.

The flow into the Arctic basin from the N.Atlantic has changed, it's lost energy from the freshwater flow on both sides of Greenland weakening the Gulf Stream via observation so losing some of the salinity source from the past to create the saline bottom current; closing off most of the flow from the Pacific should slow or stall the increased northerly 300m current into the Arctic basin from this weakening and allowing easterly drift instead, to me this implies the sea-ice boundary may adjust farther south than today.

Of any secondary consequence I see so far this is the best thought possible given it's a remote chance to move the N.Atlantic ice-line back south, that would increase albedo to balance what gets lost so soon in the eastern basin, fluid dynamic magic, regardless it's a hydrologic possibility for modelers.

I've been studying freshening videos for the N. Atlantic, seems it being more a separate issue so far an impression. If the models are run with 1/100th the volume from the Pacific my wonder is how that affects the Gulf Stream path, the freshwater exiting the archipelago lessens from less volume to disperse, that would allow the Gulf Stream a more easterly path.

The largest negative right now the loss in snowpack from land about equals albedo-loss of sea-ice annually they feedback to each other, the sea-ice loss is about 1/4th CO2's contribution in forcing, thus the two are 1/2 of the forcing increase roughly equal to 30-years of CO2 gains = 2 * (0.21-watts/m²), it's too much heat to counter with incremental emission reductions the constraint I see; from the FEEM lecture. If not in Paris modeling used the implication is that goals are 2-3 times too little to balance this heat.