TL;DR Summary
Looking for programs that would help in dynamic balancing of small objects

I am thinking of doing a DIY project in which one sub-task would be to dynamically balance a small assembly that will be spun up by, for example, a small motor taken from a DVD drive.

As a test case, here is a setup where we would like to adjust screws S1 to S6 such that the cylinder is dynamically balanced. The motor is supported on a three-arm spider which in turn rests on three piezo buzzer elements PT1 to PT3 that will work as force sensors. 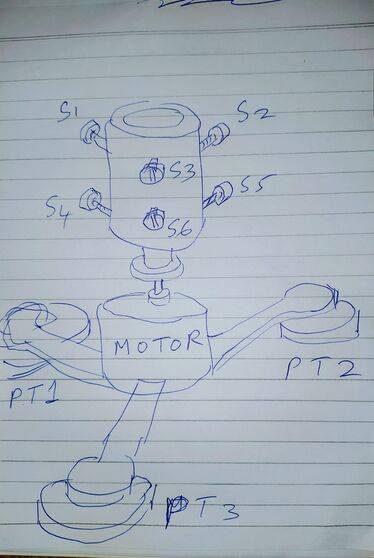 I will use an Arduino to acquire the force waveforms (or even try to use the sound card of my PC, to start with). There will also be an optical sensor that will produce a marker pulse as a phase reference.

Once I acquire the waveforms, what options exist in terms of Windows executables / Python code / Mathematica code / whatever that will give me at least some approximate feedback like "turn S1 one turn clockwise", "turn S4 2.5 turns anticlockwise" and so on -- such that I will end up with a balanced assembly?

I have also considered such a package, so old wheel balancers could be upgraded to a notebook display.

I think there is a problem with your configuration in that all three sensors are in the same plane, and cannot resolve sideways forces. That makes it very difficult to identify which of each pair of two screws must be wound which way. Your transducers are at right angles to the force you need to measure.

A wheel balancer has four transducers arranged in quadrature pairs, on the two horizontal shaft support bearings. That makes it possible to resolve which bead requires how much balance weight.

Baluncore said:
I think there is a problem with your configuration in that all three sensors are in the same plane, and cannot resolve sideways forces.

That's a good point. I will try to put in 4 or 6 sensors in 2 groups separated along the axis.

@Swamp Thing
Further thoughts ... With six screws, you have too many degrees of freedom.
You need only two selected balance weights, or four fixed mass grub screws.

For the theory, take a look at chapter 5; (Balancing of Machinery).
Notice the example problem solved at the end of the chapter.
Baluncore
Science Advisor

Wikipedia has a list of software for rotor design and balance.
https://en.wikipedia.org/wiki/Rotordynamics#Software
Dr.D

You will understand the problem better if you write your own computer code.
Baluncore
Science Advisor

Dr.D said:
You will understand the problem better if you write your own computer code.

How can you write your own code if you do not understand the problem?
Dr.D

By the time you have a correctly working computer code, you will understand the problem.

Using a code written by someone else will teach you exactly nothing about the fundamentals of the problem. If you want to understand the problem, work it out for yourself (pencil and paper work first, then implement in a computer code, then check for correctness).
berkeman
Mentor

This whole thread is fishy...
Dr.D

@ berkman Would you explain what is fishy about it, please?
berkeman
Mentor

Dr.D said:
@ berkman Would you explain what is fishy about it, please?

I guess my attempt at humor was too obscure, sorry.

Dr.D said:
Using a code written by someone else will teach you exactly nothing about the fundamentals of the problem. If you want to understand the problem, work it out for yourself

Yep, that was a little "loose". Never fear: you will be called to task. So don't hesitate!
Dr.D

Got it! Sorry I missed that.
Baluncore
Science Advisor

Humour? Two can play at that game.

It is just that kind of belief and behaviour that is destroying what little is left of the natural environment.


Dr.D said:
By the time you have a correctly working computer code, you will understand the problem.

That is because you must specify the problem and it's numerical solution process, before you can write demonstrably correct code. Also, you always find your shoes in the last place you look.
Dr.D

Baluncore said:
Also, you always find your shoes in the last place you look.

It would be really silly to continue searching for your shoes after finding them.
Feodalherren

Dr.D said:
It would be really silly to continue searching for your shoes after finding them.

I have been known to look for my keys while holding them in my hand.

On Topic: I have created micro controllers for similar applications. I obviously can't share proprietary code but I can tell you that our design process is to first model the system in MATLAB Simulink or SimScape Mechanics. You can then use MATLAB to push out the actual C-code for the application.

If you're going to do it all manually you'd have to derive all the equations of motion, get the transfer function, develop and tune a PID controller... Basically what I'm trying to say is that this is not a trivial task without modern computation software to aid you, and even then it's not really trivial but at least it's manageable.
Share:
Share

Is it worthwhile studying multybody dynamics for kinematic and dynamic analysis of mechanical mechanisms?

Energy absorbed by water illuminated by an LED source

Optimisation software for trusses (or frames)