Conservation of momentum and energy problem

A uniform rod has a mass 2m and a length l, and it can spin freely in a horizontal plane about a pivot point O at the center of the rod. A piece of clay with mass m and velocity v hits
one end of the rod, and causes the rod-clay system to spin. 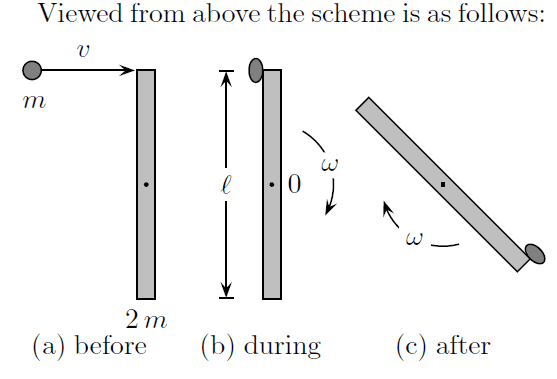 After the collisions the rod and clay system
has an angular velocity omega about the pivot.

is/are conserved in this process?

I tried II and III only as a solution, but it was wrong. I'm thinking that mechanical energy, kinetic energy, and gravitational potential energy are not conserved due to the introduction of a piece of clay, but it seems I'm wrong in some area. Can anyone help point me in the right direction?

If at any point in the system energy isn't conserved, it is either destroyed or created - is there something in the system that can do that? - is that even possible?

Total gravitational potential energy is not conserved (because the piece of clay that was at top originally ends up at the bottom). So any answer with IV in it is wrong, I'm thinking.

EDIT: woops, I thought it was vertical, not horizontal. OK, GPE should remain constant then.

EDIT: I'm referring to overall energy levels. I haven't seen anything in the question about inelastic.

Regardless, the overall energy level is conserved, but I suppose if you look at individual forms:

Kinetic increases - from clay to rod is constant.

GPE is constant - assuming we would ignore the fact the clay would technically add mass to the system. If not, it increases.
Last edited: Jan 10, 2011
BARBARlAN

Suggested for: Conservation of momentum and energy problem

Conservation of energy and momentum Problem

Conservation of momentum and energy problem

Momentum and Conservation of energy

A conservation of mechanical energy and momentum problem