How do we detect if there is more than 1 exoplanet orbiting a star using radial velocity method?

I read this but I didnt understand it. Can someone explain the answer in Laymans terms?

Imagine there's just a single planet in a circular orbit. It and the star both orbit their mutual centre of mass, and the motion of the star causes variations in detected light wavelengths due to Doppler shift. This lets you calculate the radial velocity.
If you draw a graph of the star velocity against time, in the case above you'd get a sinusoid with the period reflecting that of the planet's orbital period.

With both the planets present, you'd have a velocity graph that represents both of the graphs superimposed, like so:

As with any other function addition, you just take the value(V) of the first one at any given time, and add it to the value of the second one at that time, and plot the result on a new graph.

The more planets you add, the more complex the resulting function becomes. This one is for a simulated system resembling that of Jupiter and its Galilean moons: 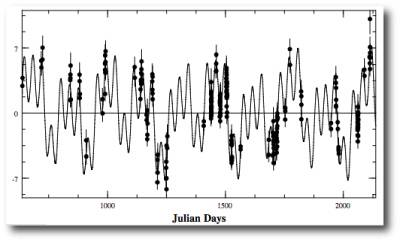 Elliptical orbits produce a somewhat different velocity graph than a simple sine function, but the principle is the same.

How the detection process works, is you draw the function* from observations, and then try to construct such a model of the system that would result in matching the graph. You try to figure out how many, how large, and how distant planets you need to add for all of their contributions to add up to what you see.

*that's not entirely accurate, but let's not get into details
Last edited: Sep 19, 2014
snorkack

Note that if the periods are in 1:2 resonance, the resulting orbit is hard to distinguish from a single planet on an elliptical orbit.
Bandersnatch
Science Advisor

snorkack said:
Note that if the periods are in 1:2 resonance, the resulting orbit is hard to distinguish from a single planet on an elliptical orbit.

Care to explain? I thought the first picture in post #2 represented two planets in 1:2 resonance?
snorkack

Like this:
http://arxiv.org/pdf/0809.1275v2.pdf
for example see Figure 2, page 19, and Figure 4, page 21. The second sinusoid shows itself as sharpening one peak and flattening the opposite maximum - if the inner planet is small enough, not even a secondary maximum curvature - and that´s roughly what orbital eccentricity would show. Small deviations from the expected mathematical curve shape are lost in the noise.
Share:
Share

B NGC 4590, more than 1,400 stars found in various evolutionary stages

I Are there more Pulsars than we observe?

Insights Gaia and the Race to Detect More Gravitational Waves

B Is there more to the Red Shift than we think?

A The Habitable Exoplanet Hunting Project