Five Years On Since the Global Financial Crisis

As outlined in this article - http://nz.finance.yahoo.com/news/anniversary-great-recession-whats-changed-145605229.html - today marks the fifth year in which the financial crisis 'started'.

I quote 'started' as the initial lead up occurred when those with very terrible credit ratings were given sub-prime loans; loans also given to those who needn't declare whether they earned an income or not, with the issuer of that loan selling it off, for a fee, to be incorporated in someone's stock that soon suffered when the bearer of the loan defaulted.

What have we learned from the global recession? Are the effects of the recession still starting to be seen? Have we evolved at all to stop something like this happening in the future?

I open the floor to all members to participate. I know very little about the ins and outs of this recession, however have read numerous books which detail how it all started.

I think very little has changed. Obviously the economy is weaker for the average person (or perhaps not obviously, as I"m sure someone will come to throw statistics at this point), but as far as the overall structure of our economy and society it's basically the same. We haven't really learned any lessons from the past five years, except maybe we've finally gotten around to questioning government debt and use less oil.

As far as the big banks go, they're still loaded up on questionable assets. For example many of them are trading at or below book value.

When you buy a bank stock, you essentially own a portion of their assets. You should be paying for those assets, plus however much earning potential you think the bank has. If you pay below book value, it means that you think the bank is going to lose money through incompetence (unlikely) or they're playing with funny money when reporting their assets, which is what most people think. So as far as vulnerability to another collapse goes, the market seems to think banks aren't doing a good job of cleaning up their balance sheets, or at least reporting accurately on how clean they are.
edward

People have changed on main street, they simply can't afford to buy. It is a different story on wall street.


Over the past couple years, hedge funds, private equity firms and the biggest banks have raised massive amounts of capital to buy distressed or foreclosed single-family homes, often in bulk, at bargain prices.

It’s the next Wall Street gold rush, with all the warning signs of a renewed speculative bubble.

Individual local investors have a hard time bidding against hedge funds. From my own personal experience I question the honesty in the way Freddie Mac is selling foreclosures through their HomeSteps program. That isn't the topic here so I will stop at this point.
phinds
Science Advisor
Insights Author
Gold Member
2021 Award

StevieTNZ said:
What have we learned from the global recession?

That an unregulated financial sector can ruin us.


Have we evolved at all to stop something like this happening in the future?

There was a lot of talk about reforming the financial system up until the big banks were bailed out. Then all of that talk gradually vanished into thin air.

The article below which was written by an economist is an interesting read.


2. The crisis demonstrated that real reform can only be undertaken in the depths of a crisis. Once Wall Street had been rescued behind closed doors by the US Fed and Treasury (it took $29 trillion!), there was no hope of reform. The biggest institutions just got bigger. They are back to doing the same things they were doing in 2007. Even the very weak Dodd-Frank reforms will never be implemented—Wall Street put together armies to delay, water-down, and eventually prevent implementation of any changes that would constrain the financial practices that caused the crisis.

Have we evolved? Are you joking? It's been a stagnation, it won't get better - those who know how to fly just don't have to care.
StevieTNZ

Economist states NZ's economy is on the right track. The current Govt. plans on having a budget surplus in the tax year 2014/15.
Last edited by a moderator: May 6, 2017
Tosh5457

Portugal situation isn't good at all. This is because we had an excessive amount of public debt (100% of GDP before the Troika bailed us), and because of many structural problems in our economy (that Ireland for example, which is in a similar situation as ours, doesn't have). The global crisis was just igniting cause of Portugal's problems, we had almost no economic growth for a decade (2000-2010), with the deficit and public debt widening year over year.
We're still in recession, with 17% unemployment. Deficit is being hard to control, and it's still at 5%. Many cuts in government employees wages and pensioners didn't pass on the Constitutional Court, because of the outdated Constitution we have, made by Communists in the '74 Revolution. The Socialist Party isn't willing to join the government changing the Constitution, nor is the far-left of course, so it can't be changed. The 2nd bailout from Troika is almost certain, and assuming we can't have good economic growth in the next years, it'll take maybe 5 to 10 years to consolidate the government budget, with no forecast on when the financial aid will be able to stop. Also the current government, even though it has already made extensive cuts, it still hasn't cut much on public companies, where a good part of the spending is. Of course that cutting in this area will hurt a lot of politicians, their families and friends, so this executive doesn't have the courage to do it.

We Portuguese sure have learned a very important lesson: be fiscally responsible. I just don't know how long will this lesson be memorized, if the socialists take control of the government again there's no telling on what they're gonna do. The demagogy of the socialists and communists here is still too strong on the public discourse, but this crisis made many people open their eyes.
Last edited: Sep 28, 2013
mheslep
Gold Member

The WSJ has an outstanding, ongoing series called Crisis Plus 5. The WSJ owns this topic, beginning back several years prior to 2008 with a steady series of warnings about the risks presented by the mortgages bundled by Fannie and Freddie Mac along with their cozy relationship with lender Countrywide.

Interestingly, Freddie/Fannie who now are part of the government and other federal agencies originated about 50% all US mortgages just prior to the crash. Today, the government originates a little shy of all mortgages in the United States. This goes on though it was considered a foregone conclusion back in 2009 when they were seized that Freddie/Fannie would be disposed of by now. 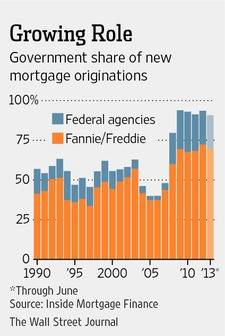 Related Threads on Five Years On Since the Global Financial Crisis

Are you investing in stocks?
2

T
Does anyone here trades in the stock exchange? (U.S)
2

40 years since the first moon landing