If you've followed loop-gravity research since 2011 you know there've been big changes in the past couple of years--one being the emergence of the spinor network formulation. Livine, Wieland, Speziale are some of those involved. I see Etera Livine is a visiting fellow at Perimeter as well as being on the faculty at ENS Lyon.

He has an interesting new way to look at loop-gravity where the basic spin(or) network graph reflects a finite SAMPLING of geometry possibly associated with a particular observer and there are procedures on the one hand for COARSE-GRAINING (which eliminates some vertices and leaves self-loops at the remaining ones) and on the other hand for REFINING (the reverse, which adds vertices).

His approach allows for self-loop creation and annihilation operators and a self-loop FOCK SPACE representing an overlay of geometric distortion on the observer's basic spin(or) network.
The geometry Fock space holds information which comes into play when the network is refined.

This impresses me as definitely something to keep track of, so I'll quote from Livine's October 2013 paper "Deformation Operators of Spin Networks and Coarse-Graining"

==quote page 22 http://arxiv.org/abs/1310.3362 ==
Since self-loops are the gauge-fixed counterpart of the internal loops, we imagine a different structure for loop quantum gravity. Instead of defining a loop gravity dynamics that induces transitions between states living on different graphs, one could start with a fixed background graph (reflecting a certain sampling of space, possibly as probed and measured by a given observer) with dynamics acting on that fixed graph but possibly creating and annihilating self-loops at every vertex of that graph. We could then work on a Fock space over the background graph, with spin network states living on that background graph but also on any extension of it with extra self-loops. These self-loops account for the (possible) internal structure of each vertex and represent the coarse-graining of any more refined graph that could be obtained by the dynamics from the background graph.
==endquote==
Last edited: Oct 18, 2013

On page 11 Etera hints at a way to implement the holographic principle in loop-gravity.
==quote http://arxiv.org/abs/1310.3362 ==
To summarize, if the internal graph of the bounded region is already a tree, i.e. contains no loop, then the whole region can be considered as having non internal structure per se and can be identified to a single vertex for the external observer without loss of information. Indeed, without internal loops, there can not be any gauge-invariant fluctuations of the connection inside the region and thus no non-trivial curvature can develop itself. Morally, physical degrees of freedom of loop gravity live on loops of the spin networks when there is no boundary and they are for instance the only relevant contributions to the region’s entropy (see e.g. [35–37]). Mathematically, when the internal graph is a tree, one can map by a gauge transformation all the holonomies within the region to the identity, thus somehow projecting all the information about the region’s geometry onto its boundary. This is an obvious realization of the holographic principle, at the kinematical level.

When there are internal loops and thus petals to the gauge-fixed flower, the region can develop curvature and non-trivial holonomies around the loops. At the kinematical level, we therefore have internal information to retain about the region when coarse-graining it. At the dynamical level, when taking into account a proper consistent implementation of the diffeomorphism constraints at the quantum level, these bulk degrees of freedom (local to the region) might get projected out onto the boundary once more, thus providing a non-trivial implementation of the holographic principle in loop quantum gravity. This is however outside the scope of the present analysis.
==endquote==

An overview given in the conclusions section at the end helps put this in perspective.
==quote page 20 http://arxiv.org/abs/1310.3362 ==
In the present work, we have investigated the boundary observables and deformations of a bounded region of a spinor network in loop gravity, leading us to discuss the coarse-graining of such a region to a single vertex. By a gauge-fixing of the local SU(2) transformations, we were able to effectively contract an arbitrary region to a single vertex, with its boundary edges plus some self-loops coming from all the (independent) loops of the original internal graph of the region.The difference with a single vertex is exactly these self-loops, reflecting the internal structure and degrees of freedom of the region’s bulk. This allowed to identify the SU(2)-invariant boundary observables and to show that their Poisson-algebra is exactly the same as in the case of a single vertex. In particular, the area-preserving deformations are once again identified as U(N) transformations, where N is the number of boundary edges. The coarse-graining of the region then amounts to neglecting the self-loops or integrating over them. However, their existence and the fact that they can carry non-trivial holonomies implies that the boundary spinors do not satisfy the closure constraints anymore. In the case of a single vertex, the closure constraints ensure the existence of a unique dual polyhedron (with N faces) embedded in flat 3d space. When the closure constraints are relaxed, this is not possible anymore (at least the straightforward correspondence is not). This does not mean that the region’s boundary is not a closed surface anymore but reflects that the region’s bulk has a non-trivial curvature. We further show that the value of the closure defect is related to the boundary area and the Casimir of the u(N) generators (identified as boundary diffeomorphisms at the discrete level).

All this carries through to the quantum level. Spinor networks get quantized to the spin network wave-functions of loop quantum gravity. Spinors satisfying the closure constraints around a single vertex become SU(2) intertwiners. And the space of intertwiners at fixed total boundary area carries an irreducible representation of the unitary group U(N). Coarse-graining a region of a spin network again leads to relaxing the closure constraints around the effective single vertex. The resulting state intertwines between the SU(2) representations living on the boundary edges and an extra one representing the closure defect. And we obtain U(N) irreducible representations labeled by the values of the total boundary area and the closure defect.
==endquote==
Last edited: Oct 18, 2013
marcus
Science Advisor
Gold Member
Dearly Missed

Here's the abstract of Etera's paper (I think it is one of the most important quantum gravity/geometry papers that have appeared in 2013):

http://arxiv.org/abs/1310.3362
Deformation Operators of Spin Networks and Coarse-Graining
Etera R. Livine
(Submitted on 12 Oct 2013)
In the context of loop quantum gravity, quantum states of geometry are mathematically defined as spin networks living on graphs embedded in the canonical space-like hypersurface. In the effort to study the renormalisation flow of loop gravity, a necessary step is to understand the coarse-graining of these states in order to describe their relevant structure at various scales. Using the spinor network formalism to describe the phase space of loop gravity on a given graph, we focus on a bounded (connected) region of the graph and coarse-grain it to a single vertex using a gauge-fixing procedure. We discuss the ambiguities in the gauge-fixing procedure and their consequences for coarse-graining spin(or) networks. This allows to define the boundary deformations of that region in a gauge-invariant fashion and to identify the area preserving deformations as U(N) transformations similarly to the already well-studied case of a single intertwiner. The novelty is that the closure constraint is now relaxed and the closure defect interpreted as a local measure of the curvature inside the coarse-grained region. It is nevertheless possible to cancel the closure defect by a Lorentz boost. We further identify a Lorentz-invariant observable related to the area and closure defect, which we name "rest area". Its physical meaning remains an open issue.
24 pages

If Livine coarse-graining is important (as I suspect is the case) it needs to be seen in the broader context of Loop gravity advances made in the past two years, ie. since 2011.

What you see taking shape is a viable mechanistic theory of microscopic geometry. A kind of molecular picture of changing geometric relationships: quantum dynamics of the elements of angle area volume and a definite rationale for geometric uncertainty and indeterminacy at small scale. Immediate nuts and bolts mechanistic, one could say, rather than mere holography.
So, in effect, a new model of spacetime which is not the usual classic continuum (not a differential manifold at small scale) although it approximates the continuum at large.

Livine has developed a way of coarse-graining this new model (with an eye to the renormalization flow, among other things). As an incidental observation, it uses the spinor formulation that has come into increasing use since 2011. I should put some links in case anyone wants to glance at some of the contextual work mentioned here.

The comment on tree structure and holography is interesting.

I think MERA (which is a picture of holography via the Ryu-Takayanagi formula) contains tree-tensor networks as a subset. (eg. p 113 of http://www.sissa.it/cm/thesis/2011/silvi.pdf)
marcus
Science Advisor
Gold Member
Dearly Missed

You're right. There were several interesting comments on holography! It was mentioned in passing I think 3 times: twice on page 11 and once on page 14.

Something to notice is that this is holography in a discrete setting. It might be better to think of it as an analog. The context is a network rather than a continuum--no smooth differential manifold. You have a discrete network of geometric events or measurements (angles, areas, volumes, relating to each other) and you take a limited patch of it: a compact connected subgraph consisting of a few vertices and the edges connecting them. That constitutes a region in the network and it has a boundary where it connects with its surroundings, namely with the rest of the network. The degrees of freedom are the spinor labels on the network rather than fields on a manifold.

You recall him talking about information or degrees of freedom living inside the region being pushed out the the boundary. Information is cleared out of the interior ("bulk") and made to live on the surrounding edges and vertices. He doesn't go in detail about how to do it except in the case where the subgraph has no circuits--is the type of graph known as a tree. And that interior region of the network is what he wants to consider coarsegraining---collapsing down to a single vertex, that still emanates edges connecting it out to the surrounding boundary vertices---but coarsegraining in a way that retains essential information. At least that is how I read it. It looks like a DISCRETE ANALOG of holography.
As he said in one of those brief remarks it was outside the scope of that paper--just an intriguing side comment.
Last edited: Oct 25, 2013
Paulibus

Marcus #3 said:
I think it is one of the most important quantum gravity/geometry papers that have appeared in 2013

Taken together with the paper's emphasis on "closure defects" and their role in implementing coarse graining and gauge fixing, this judgement leads me to comment, as an example of Schartz-Metterklume clarification, that Livine's "tagged or loopy spin networks" may be related to the considerable body of mid-20th-Century literature that treats the defect solid state in terms of the calculus of symmetrical tensors, using operators devised for this purpose, namely Def, Ink and Div. See especially E. Kroner, Kontinuumstheorie der Versetzungen und Eigenspannung, Springer, Berlin 1958 and also F.R.N.Nabarro, Theory of Crystal Dislocations, Oxford University Press 1967, p.39.
Last edited: Oct 25, 2013
marcus
Science Advisor
Gold Member
Dearly Missed

Used to love reading Saki short stories as pre-teen and early teen. Sly hilarity. But the idea that geometric defects could move around and have some kind of physics almost analogous to matter is a good idea. then "curvature" is just a macroscopic statistical property emerging from the bubbling stew of micro dislocations. One has to MUTE this kind of talk because so speculative it doesn't seem decent to mention in public. But still 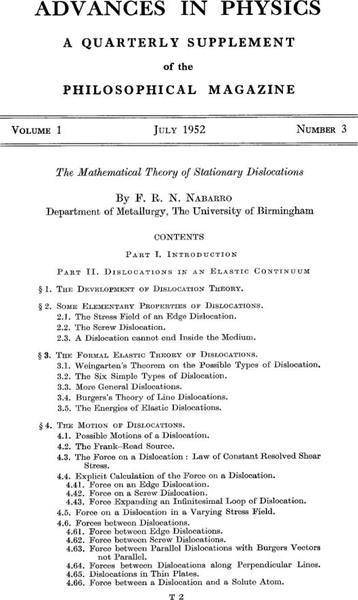 here the TOC of a 1952 article by Frank Nabarro.

QG self consistency and cut-offs