How are ancestors classified in a cladistic system?

TL;DR Summary
If all taxa have to be monophyletic, how can we classify ancestral species without all descendant species "telescoping down" into them?

When I first learned about cladistics, it seemed like an elegant and objective way of classifying life - forget about subjective physical similarities, classify purely based on scientifically testable ancestry, and have all taxa be monophyletic clades, so everything in one taxon is more closely related to other members of its taxon than anything outside. As far as I understand it, this means phrases like "taxon X evolved into taxon Y" are not acceptable since that would make taxon X paraphyletic, and some members of taxon X would be more closely related to taxon Y than to other members of taxon X (e.g. if taxon X is "fish" and taxon Y is "tetrapods," that means "fish" are paraphyletic and bony fish are closer to tetrapods like humans than they are to sharks.) Instead we should say "taxon Y is included within taxon X." (So tetrapods are included within the fish clade, or if you're uncomfortable with calling humans fish, the vertebrate clade.)

But after looking at a few cladograms, a thought occurred - all named species were on the tips of branches, and the nodes were always named with the name of the whole clade and not its common ancestor. And... hang on, how could ancestral species even fit into a monophyletic classification?

Say Homo sapiens speciates into two new species, which speciate into more species, which speciate into more species. Come back in 200 million years, and each of those species may be as different from each other as mammals are from each other today. Yet wouldn't a cladist insist they were all part of the taxon Homo sapiens? If so, then H. sapiens would become an enormously diverse "species" made up of thousands of sub-sub-sub-subspecies that all can't interbreed. And if they aren't part of H. sapiens, doesn't that make H. sapiens a paraphyletic taxon whose descendants aren't all included, and therefore unacceptable according to cladistic rules?

Suppose we find a fossil of a dinosaur from the early Triassic, which turns out to be the common ancestor of all dinosaurs. Call it Ancestrosaurus. How would we place that on a cladogram? The node there would be labelled "DINOSAURIA" for the entire clade, not "Ancestrosaurus" for the ancestral species the clade evolved from. Perhaps we could place Ancestrosaurus as the earliest branch to split off from that node, but that would incorrectly imply this species died out without leaving any descendants and its unnamed sister species branched off to give rise to the rest of the dinosaurs.

You could say that any fossil dinosaur we find is unlikely to be the actual ancestor of all the rest and we can safely assume that all actual dinosaur fossils we find are related to each other but not ancestors or descendants of each other. But even if we never find the common ancestor of all dinosaurs in the fossil record, evolutionary theory says such a species must have existed. How would we classify it? If we can't, then how is cladistics a viable classification system if it leaves some organisms impossible to classify? And these hypothetical questions become less hypothetical with more recent species or genera, like human ancestors. Most palaeoanthropologists agree that Australopithecus gave rise to Homo. Does that make Australopithecus an invalid taxon because it excludes some of its descendants?

Where does the rule of monophyly leave the evolutionary trees shown in palaeoanthropology books? Those are never cladograms but always look something like this: https://cdn.zmescience.com/wp-content/uploads/2015/03/palmer-and-ash.jpg Here we see H. sapiens evolve from H. heidelbergensis which evolves from another species, and so on back through the australopithecines to Orrorin tugenensis, on this hypothesis at least. If this hypothesis is correct, then if we make all taxa monophyletic all hominin species should be included within Ororrin tugenensis. (Sure, you can say that the hypothesis may be wrong and all the species listed here may be sister taxa rather than actual ancestors of each other - but there must be ancestors, and if we dug up their fossils, we'd surely assign them a species name and try to put them somewhere on the tree. How would we fit them into a cladogram?)

Taking this logic to extremes, if we assign a species name to LUCA, the Last Universal Common Ancestor of all life around today - let's call it Luca primogenita for the sake of argument - then wouldn't all existing taxa - all archaea, bacteria and eukaryotic species alive today - end up telescoping back into sub-sub-sub-sub-sub-sub-sub...-sub species of L. primogenita ?

Amaterasu21 said:
Summary:: If all taxa have to be monophyletic, how can we classify ancestral species without all descendant species "telescoping down" into them?

But after looking at a few cladograms, a thought occurred - all named species were on the tips of branches, and the nodes were always named with the name of the whole clade and not its common ancestor. And... hang on, how could ancestral species even fit into a monophyletic classification?

The speciation is typically a very fast process, happening in few generation in a very small populations. With nearly 100% probability speciation itself leave no fossil records. Therefore, the absence of well defined "node" (speciation point) in cladogram is the problem of lack of knowledge. In absense of knowledge, position and properties of unknown cladogram node are commonly described by the genus of descending species, or by nearest "offshot" of cladogram.

P.S. Cladistic as whole is not entirely correct too - it do not take into account a horizontal gene transfer.
BillTre
Science Advisor
Gold Member
2022 Award

Although cladistics implies that all taxa (taxonomic groups) are monophyletic, this is their ideal situation for the purposes of analysis of relationships and determining homologies.
Considering that the goal is to track the genetic inheritance through evolution, obvious exceptions include horizontal gene transfer (usually a small percentage of a population's total genetic inheritance), speciation after hybridization between different species (about a 50-50 mix), and symbiosis generating events (mitochondria and clhoroplasts). There are ways cladistic can identify with hybridzation, but they do not generate dicotinously branching cladograms, that are the cladistic ideal. Monophyly and paraphylyl don't obvious relate to these situations. However, they can be applied to groups generated from such taxa later in evolution. Cladistics also tolerates but does not like unresolved tricotomies (three groups whose relationships can not be resolved with tehe information at hand.

Branch Points:
Cladistics perfers species (living or extinct) as leaves on a tree (end points). The branch point populations (considered a theoretical necessity for obvious reasons) are considered hypotheses and not directly observed. Your identified ancestral species would be an extinct branch off the line (probably leading to the ancestral population).
Hennig, who originated cladistic analysis in 1950 (but was not well knowin the English speaking world until his 1950 book was translated in 1966) has diagrams in his books concerning what transitional populations look like. They populations are what you might expect, something like this (which I previously drew based on his diagrams): 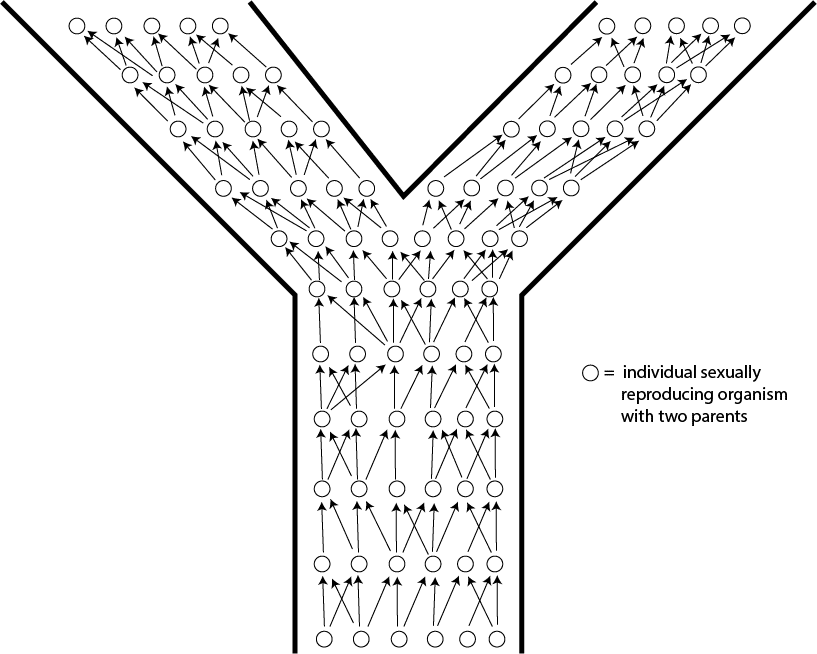 Some individuals are intermediary between the two developing populations.
This is less of a problem for non-sexually reproducing populations, but still exists.

Subsetting Down to the Origin:
Except for the cases where there is some kind of lateral gene transfer, everything can in theory collapse down into an original all inclusive ancestral clade. I don't consider this a problem. Its just history.
An alternative way to depict cladograms uses Venn diagrams. As new taxa evolve (in the normal manner) they form nested sets (which are monophyletic groups).
The monophyletic groups would be defined as all the taxa derived from a hypothetical ancestral group.

Naming these clades is a different issue.
I personally don't like the different levels of taxa, like families, orders, classes. Species are often cited as the only natural taxa. Some think it should breeding population rather than species (but that would include most species). There are many rules about the naming specific names of taxa. Kind of complicated.


Amaterasu21 said:
Summary:: If all taxa have to be monophyletic, how can we classify ancestral species without all descendant species "telescoping down" into them?

that means "fish" are paraphyletic and bony fish are closer to tetrapods like humans than they are to sharks.) Instead we should say "taxon Y is included within taxon X." (So tetrapods are included within the fish clade, or if you're uncomfortable with calling humans fish, the vertebrate clade.)

Within cladistics, this is the correct interpretation. The common idea of "fish" is not the cladistic (and dominate biological) view of "fish". There books written about this: Your Inner Fish. After cladistics became popular among biologists, there was a lot of jiggling around of taxonomic groups and names of groups to deal with these differences.

Yes, this is the modern biological way to say it. It better reflects their genetic heritage and the closeness of their evolutionary relationships.

If it is unacceptable (in a pure biological manner), then it would probably be because the reptiles, amphibeans and fish are intended as paraphyletic groups. If they are used to mean nested clades encompassing all of their derivatives, then it should be OK.
Share:
Share

Suggested for: How are ancestors classified in a cladistic system?

On what basis are parts of the brain classified?

Are these “flaws of evolution”?

Recent Article on the Evolution of a Theory of Covid Origins

Why do scientists call evolution a "theory"?
2

Medical Evolution of people within a generation?

How are blood glucose monitoring modules installed in arms?