The Northern Quoll is endangered marsupial in Northern Australian.
Its main problem, leading to its population decline, was eating the invasive and toxic cane toad.
A population of them was introduced to a couple of islands (free of both cane toads and predators), where in 13 generations a large population was built up from which animals were reintroduced to the mainland.
Problem is that the quolls lost their fear of predator scent and those that were introduced were quickly eaten.
This is considered a genetically encoded fear of the scents which was lost due to lack of selection to maintain it during the 13 generations on the islands.
Science news article here.

This is not so different from problems of putting farm raised fish into wild waters, where they breed with the wild fish and introduce genetics not adapted to the local wild situations.

The solution is obvious:
Introduce cane toads on an island where they don't have predators. There is no pressure to be toxic any more, being toxic needs unnecessary energy and is selected against, wait until they get less toxic. Introduce the less toxic cane toads to an island with marsupials, in addition introduce marsupial predators. The marsupials eat the cane toads and get sick but don't die. They learn to not eat them. After a while, relocate them to Northern Australia.
What could go wrong?

When do people learn that introducing new species elsewhere leads to side effects that are rarely known before?
Bystander
Science Advisor
Homework Helper
Gold Member

mfb said:
When do people learn that introducing new species elsewhere leads to side effects that are rarely known before?

Here's a link to the associated study being discussed:
Jolly et al. (2018) The perils of paradise: an endangered species conserved on an island loses antipredator behaviours within 13 generations. Biol Lett: 14: 20180222
http://rsbl.royalsocietypublishing.org/content/14/6/20180222

When imperilled by a threatening process, the choice is often made to conserve threatened species on offshore islands that typically lack the full suite of mainland predators. While keeping the species extant, this releases the conserved population from predator-driven natural selection. Antipredator traits are no longer maintained by natural selection and may be lost. It is implicitly assumed that such trait loss will happen slowly, but there are few empirical tests. In Australia, northern quolls (Dasyurus hallucatus) were moved onto a predator-free offshore island in 2003 to protect the species from the arrival of invasive cane toads on the mainland. We compared the antipredator behaviours of wild-caught quolls from the predator-rich mainland with those from this predator-free island. We compared the responses of both wild-caught animals and their captive-born offspring, to olfactory cues of two of their major predators (feral cats and dingoes). Wild-caught, mainland quolls recognized and avoided predator scents, as did their captive-born offspring. Island quolls, isolated from these predators for only 13 generations, showed no recognition or aversion to these predators. This study suggests that predator aversion behaviours can be lost very rapidly, and that this may make a population unsuitable for reintroduction to a predator-rich mainland.

That's quite surprising that a trait can be lost from the genetics of a population in such a relatively short period of time.

What genetic traits may have been lost or gained in the human population over the past 13 generations (since the ~ 1600s)?
BillTre
Science Advisor
Gold Member

I don't know about rapid human changes, but rapid changes in captive fish populations are easy to find, some in a few generations.

It is easy (but often not desired) for a hobbyist fish breeder to end up with genetically smaller fish populations by simply breeding the first fish from a spawn to mature for a generation or two. These are fish that became mature at a smaller size and don't get that much bigger afterwards.
It may not be natural selection, but it is selection.
Because there are very small populations, the changes can be very fast.
atyy
Science Advisor

Why is the fear of the predator's scent thought to be genetically encoded, as opposed to a behaviour that was learned from parents?
BillTre
Science Advisor
Gold Member

atyy said:
Why is the fear of the predator's scent thought to be genetically encoded, as opposed to a behaviour that was learned from parents?

From the linked article:

But the Astell Island quolls behaved the same regardless of the box, showing no aversion to the scents of the predators, the researchers report today in Biology Letters. Intriguingly, offspring from the two populations—which had been raised in captivity—showed the same patterns of behavior as their parents, suggesting there was a genetic basis to the animals’ responses.

@BillTre, thanks - what I can't seem to find in the article is what "raised in captivity" meant. At what age were the animals removed from their parents, and was that young enough to exclude that the parents had taught them the behaviour?
atyy
Science Advisor

I wrote to Chris Jolly with my questions, and he generously answered them in detail, and allowed me to share his responses here.

Me: Were the young quolls separated early enough from their parents to exclude that the parents taught the behaviour to their children?

Chris: The quolls were removed from their parents at the earliest stage ethically possible. But during this time their parents were in captivity with them, and they never encountered predators during this time. Since quolls don’t have language or any means of communicating learning to their young without directly showing them things to avoid, there is no way they could have transmitted this learn to their young. Any recognition the young have of predators has only been transmitted to them via their inherited experience.

Me: Do you think it might work to teach the quolls fear of the relevant smells before reintroducing them to the wild?

Chris: We have tried training them to fear predators, so far it hasn’t worked. I think now that the fear has been lost, it needs to be instilled into the isolated populations via natural selection. That would meaning introducing predators in the the population. Some would learn, some would be eaten and wouldn’t pass of their naive genes.

Me: What sorts of training have you tried?

Chris: The training we’ve trialed has been fairly basic but should theoretically work if predator-aversion is easily acquired. We used operant conditioning (pairing an electric shock with the presence of a live dingo behind a barrier) on multiple random occasions with captive-born NT quolls and then tested their responses in a repeat of the same experiment. There was no change in behaviour. This has been the findings of many people that have tried to train predator-aversion (but see van Heezik et al 1999). Either the antipredator behaviour has been unable to be stimulated or it’s been insufficient to prevent the animals being killed by the target predator.

It may seem, from our ability to train quolls to avoid toads, that it should be easy to train them to avoid predators but it is far more complex than that. Conditioned taste aversion occurs along a very specific neural pathway than exists in all animals. It’s just one behaviour. “Don’t eat X”. Effective predator aversion is many many behaviours acting together to prevent an animal ever encounting it’s predators. By the time the encounter has occurs it’s often too late.
Ygggdrasil
Science Advisor
Insights Author
Gold Member
2021 Award

With regard to the genetic basis for predator avoidance, here's one of the relevant figures from the paper: 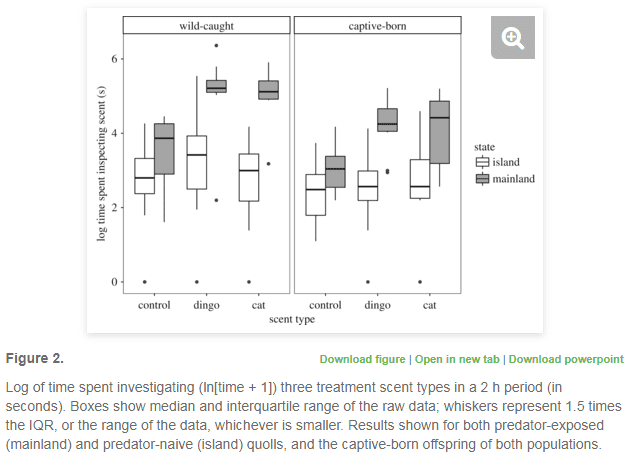 The effect size looks like it could be somewhat reduced in the captive-born vs wild-caught populations, suggesting that there could be some learned component to the behavior. However, the different behaviors of the quolls from the (predator-free) islands and the (predator endemic) mainland is still very strong in the captive born population. The fact that the differences manifest in time spent investigating scents could suggest that the genetic changes might have to do with the sensitivity of the quolls to certain scents (which could very plausibly have a genetic basis).

Given that the change occurred very quickly, a DNA sequencing study that looks for genetic signatures of positive selection in the island population could potentially narrow down the genetic basis for these differences in behaviors.

Can't the experiment on the island be considered as an example of animal husbandry?

Humans have a long and highly successful record of modifying breeds to suit our purposes.

Related Threads on Marsupial Loses Fear of Predators in 13 Generations

Can evolution allieviate the fear and suffering of death?

Medical Am I right to fear chiropracter practice?
2

M
What is the survival advantage to paralyzing fear?