Metal Stick that falls by gravity inside a magnetic field

I am trying to solve a problem that I have invented.

It consists of a metal stick of mass m, which falls by the action of gravity (g=constant) within a perpendicular constant magnetic field B. The direction of magnetic fiel is showed in the image.
The stick makes electrical contact with a rigid metal structure. (view image). 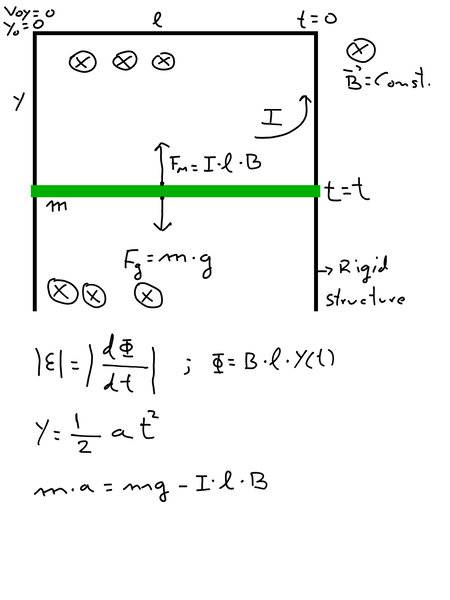 This generates an intensity I(t) . And this intensity generates a force on the bar that according to Lenz's law is upwards (this is the big problem)
Initial positions and velocity are showed in the image. For easiest calculations they are Vo=0 and Yo=0.

I use the Second Newton's Law: $$m·a=m·g-I(t)·l·B$$
for calculate the acceleration.
But I don't know if I need to know the value of the circuit resistance, of if I can solve it with the square loop induction coefficient L (Henrios). I need to calculate I(t) and I don't know how I can do it.

if we want to treat fully this problem, (including self induction, capacitance between the conductors of the rigid structure and the metal stick, and electromagnetic radiation) , we ll have to write a mini master thesis.
So we have to make some simplifying but realistic assumptions:

1) both self induction and radiation can be considered to be negligible (unless the metal stick is allowed to gain really big speeds which will lead to large values for the current and voltage produced). Also negligible is the capacitance of the rigid structure.

Your equation you got from applying newton second law is correct. Have in mind that the acceleration a there relates to the velocity of the metal stick as ##a=\frac{dv}{dt}##.


Your equation for y(t) is correct only if acceleration is constant, otherwise it isn't correct. In any case, it would be better to use the ##E=Bv(t)l## formula for the emf produced, where ##v=v(t)=\frac{dy}{dt}## is the instantaneous velocity of the metal stick.​
What is another equation you can make by applying Kirchoff's Voltage Law for the square loop (give resistance ##R_s## to the stick and ##R_l## to its parallel piece of conductor)?

So at the end you ll have two equations (differential equations) with two unknowns, the velocity of the stick ##v(t##) and the current ##I(t)##.
Last edited: Aug 5, 2018
alejandromeira

Yes, I just realized that, when I saw your answer.

Delta² said:
What is another equation you can make by applying Kirchoff's Voltage Law for the square loop (give resistance RsRsR_s to the stick and RlRlR_l to its parallel piece of conductor)?

Then I will re-upload the image by removing the wrong equation. 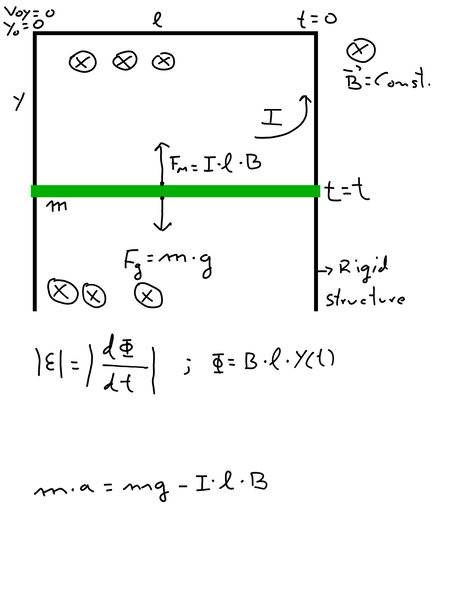 Ok. Thank you. I will try to solve it with your suggestions. This can take me some time.

Yes your equation is correct again.

If you are interested for the transient state, you got to solve the system of the two differential equations.
alejandromeira

Ok. I will follow your suggestions and start with the simplest case you say with the resistance R. Once this is done I will try to go to the other cases. Give me some time until tomorrow.
alejandromeira

I obtained the first differential equation in the simplest case of R and Ohm Law. Ok I need some time for solve it. Also tomorrow embarrassing me a familiar convocation , and I will not be able to work on the problem. Ok, when I have the result I will post it with the complete deduction
Delta2
Homework Helper
Insights Author
Gold Member

Ok fine, just to let you know, if you want also to include the increasing resistance (as y(t) will be increasing) of the vertical conductors, then the differential equation is gonna become 2nd order ,. and (this is the worst part) non-linear.

And if at next step you will also include the self induction of the increasing square loop, they gonna be two very ugly, non linear, coupled differential equations of 2nd order.
alejandromeira

Delta² said:
And if at next step you will also include the self induction of the increasing square loop, they gonna be two very ugly, non linear, coupled differential equations of 2nd order.

Of course. I want to learn how to solve this. There are one equation for R and another for L, or is another term in the ##\varepsilon## expression.
I'm sorry I don't know how begin.
Thanks
Delta2
Homework Helper
Insights Author
Gold Member

what case do you want to do now? The one where we take into account the increasing (as y increases) resistance from the vertical conductors, or the self inductance of the square loop? or both?
alejandromeira

Almost. The big problem here is that L is not constant but its a function of time because as time passes the loop increases in area.

First we should find an expression for the total flux through the loop, and then use ##\frac{d\Phi}{dt}=IR##

Correct again, Thanks for the correction !.
Last edited: Aug 6, 2018
alejandromeira

Edit: Before to solve this system I think if some terms are negligible, perhaps due the small value of ##\mu_0## the terms in k, (also we have only one loop). But if the terms in k vanishing then we are in the previous problem.
Last edited: Aug 7, 2018
Delta2
Homework Helper
Insights Author
Gold Member

The way I calculated the constant k is to consider the magnetic field ##B_I## homogeneous inside the square loop and then use Ampere's law with an Amperian loop that has dimensions ##d\cdot y## where d is the diameter of the conductors. So it will be ##Bd=\mu_0 I(t)\Rightarrow B=\frac{\mu_0}{d}I(t)##. So yes ##k=\frac{\mu_0}{d}## will be small, but it is multiplied by ##l## and still it is interesting to see how the differential equations get more complicated because of k.

There is also another way to do this, by getting the## L## , where ##\Phi_{B_I}=LI## directly from using the Neumann Formula https://en.wikipedia.org/wiki/Inductance#Self-inductance_of_a_wire_loop

and the result of that integration is mentioned in this board ("rectangle made of round wire" is our case) https://en.wikipedia.org/wiki/Inductance#Self-inductance_of_thin_wire_shapes,

you can see that the L there is pretty complicated , it has lots of terms.

So better use our approach where I essentially calculate the ##B_I## as that B of a solenoid with just one turn and length equal to the diameter of the conductors.
Last edited: Aug 7, 2018
alejandromeira

Ok, this is enough for me, because I have understood the problem.
If we want to be more precise in the value of Bind, that would be to solve another different problem.
Also if, Bind, is moore complicated the system of equatios is more hard too. Perhaps only one can solve them with a numerical approximation.

Ok, with some time (and a computer) I will try to find the equation system solution.

I have learned more than I expected, for my part the problem is solved.
Ok thanks a lot!!!

alejandromeira said:
If we want to be more precise in the value of Bind, that would be to solve another different problem.
Also if, Bind, is moore complicated the system of equatios is more hard too. Perhaps only one can solve them with a numerical approximation.

Totally agree with you here.

D
Magnetic field inside a ring

D
Magnetic field inside a Solenoid

Magnetic field inside a box

Magnetic Field Inside a Toroid

C
Magnetic field inside a solenoid