Our telescopes have never detected a black hole more massive than 20 times the mass of the sun. Nevertheless, we now know of their existence as dozens of those black holes have recently been "heard" to merge via gravitational wave radiation. A team of astronomers led by Peter Jonker (SRON/Radboud) has now discovered that these seemingly disparate results can be explained by biases against massive black holes in conventional telescope observations.

I wonder how this affects the 'known', or rather, 'observed', mass in the galaxy and universe.


In 2015, the LIGO facilities detected gravitational waves for the first time. They were emitted by two massive black holes of several tens the mass of the sun in the process of merging.

. . . few astronomers had predicted that such massive black holes would exist, let alone that they could merge. Before the gravitational wave detections, our conventional telescopes had found proof for the existence of stellar mass black holes in about 20 cases. However, none had ever been found that were as massive as those now observed through gravitational wave radiation emitted during merger. By now about 50 of such merging black hole pairs have been detected, including by the European Virgo detector, again in most cases involving massive black holes. Telescopes still have not found such black holes.

I don't know anything about this subject, but it makes me wonder, how certain is the argument that the gravitational wave detections really are due to merging black holes of such mass? Or, is it that the detections are certain about the masses involved, and anything that massive must be a black hole?
berkeman
Mentor

The largest black holes are formed through imploding massive stars, instead of exploding massive stars ("supernova"). Formed through an implosion, these massive black holes stay put in the same place where their predecessor (the massive star) was born, the plane of the Milky Way galaxy. However, that means that they remain shrouded in dust and gas. Their lighter black hole sisters and brothers, born out of massive stars through supernova explosions, experience a kick ejecting them out of the plane of the Milky Way, making them more readily observable for our telescopes measuring their mass.

gmax137 said:
I don't know anything about this subject, but it makes me wonder, how certain is the argument that the gravitational wave detections really are due to merging black holes of such mass? Or, is it that the detections are certain about the masses involved, and anything that massive must be a black hole?

I've listened to a couple of presentations on LIGO results, and apparently BH-BH collisions have a unique sound compared to other objects, e.g., colliding neutron stars. Furthermore, the signature profile depends on the masses involved.

The masses of the objects involved dictate how long they emit detectable gravitational waves. Heavy objects, like black holes, move through their final inspiral phase much more rapidly than 'lighter' objects, like neutron stars. This means that black-hole merger signals are much shorter in LIGO than neutron star merger signals, and the differences are quite striking. For example, the first pair of merging black holes that LIGO detected produced a signal just two-tenths of a second long. In contrast, the first neutron star merger LIGO detected in August 2017 generated a signal over 100 seconds long in our instruments.

LIGO can convert its space-time distortion signals into an audible sound called a "chirp" so we can all, in a sense, 'hear' the final moments of the lives of two black holes and two neutron stars. These objects had been orbiting each other for billions of years; LIGO captures the last fraction of a second or few seconds of that lifetime together. The first video below shows the evolution of the signal in the instrument along with the chirp of our first black hole merger detection (the signal is played several times, repeating the chirp first in its natural frequency--the low 'thump'--and then increased to make it easier to hear). The second video is the chirp of the 2017 neutron star merger (only the last 32 seconds of the signal are included in the video).

I don't remember how many events have been recorded.
ohwilleke
Gold Member

I wonder how this affects the 'known', or rather, 'observed', mass in the galaxy and universe.

The impact might be comparable in magnitude to the aggregate mass of planets and sub-planet objects like asteroids and comets. Most "ordinary matter" is believed to be in the interstellar medium although even estimates of the share of ordinary matter which is found in stars and galaxies isn't very precise at 6%-10% of the total. According to this source: 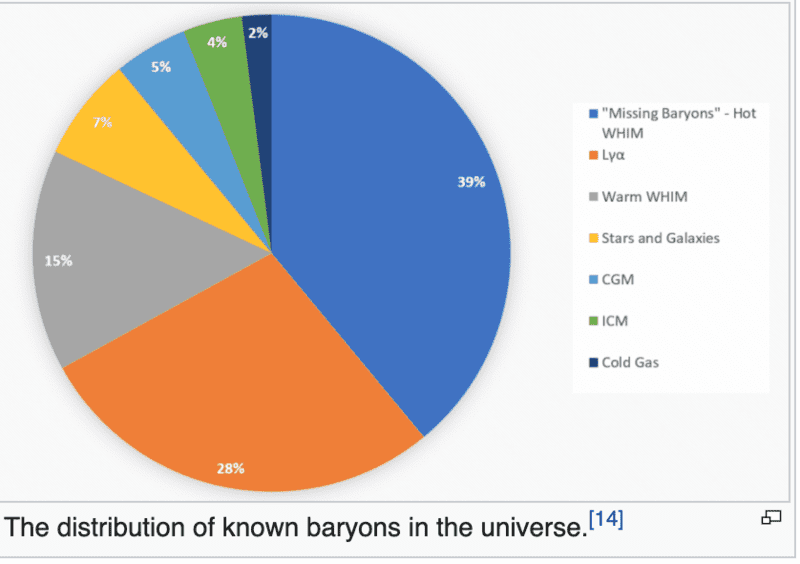 The census of known baryons in the universe tallied to around 60% of total baryons until the resolution of the missing baryon problem. This is in distinction from composition of the entire universe which includes dark energy and dark matter of which baryonic matter composes only 5%. Around 7% of baryons exists in stars and galaxies, while most of it exists around galaxies or galaxy clusters. The Lyman-alpha forest contains around 28% of the baryons. The warm phase of the WHIM was detected by soft X-ray absorption in 2012 to establish 15% of total baryon content. The intracluster medium (ICM) accounts for around 4% of total baryon content. It is composed of mostly ionized hydrogen and is about 10% of a galaxy cluster's total mass; the rest being dark matter. The ICM is low density with around 10−3 particles per cm3. The circum-galactic medium (CGM) was confirmed in 2003 by Chandra and Xmm-Newton. The CGM is a large sphere surrounding galaxies with a radius > 70 - 200 kpc.The CGM accounts for 5% of total baryons in the universe.

Since galaxies only make up 7% plus or minus, of the total ordinary matter in the universe, you are talking about a share for intermediate sized black holes on the order of 0.007% of the total (interstellar material that hasn't condensed into stars is also highly unlikely to have condensed into black holes which require even more concentration of matter into a small space.)

Also, these estimates of "ordinary matter" don't include estimates of "dark matter" that are determined, to a significant extent, by methods like lensing and the dynamics of stars in galaxies and galaxy clusters that are sensitive to total inferred mass, but not to the composition of the mass detected. We estimate the dark matter proportion by determining total inferred mass estimates by these methods and backing out the ordinary matter that we can infer, mostly from star luminosity. So, any increase in aggregate "ordinary matter" from intermediate sized black holes merely slightly reduces the total dark and ordinary matter estimate by reducing the dark matter estimate by a like amount.
Last edited: Nov 9, 2021
Share:
Share

B Stars massive enough to evolve into black holes

I Observation of the Messier 87 Super Massive Black Hole

Stargazing ATLAS observations of the DART spacecraft impact at Didymos

I Amount of black hole entropy inside the Universe?

B Could a black hole just be a planet?

I A step beyond a black hole?

I Information loss in black hole, why is it a problem?