How is 'cognitive ability' related to 'reading and spelling ability' and 'mathematical ability'?

Please help me interpret these genetic intelligence results. How can I have acute 'reading and spelling ability', acute 'mathematical ability' and less strong 'cognitive ability'? 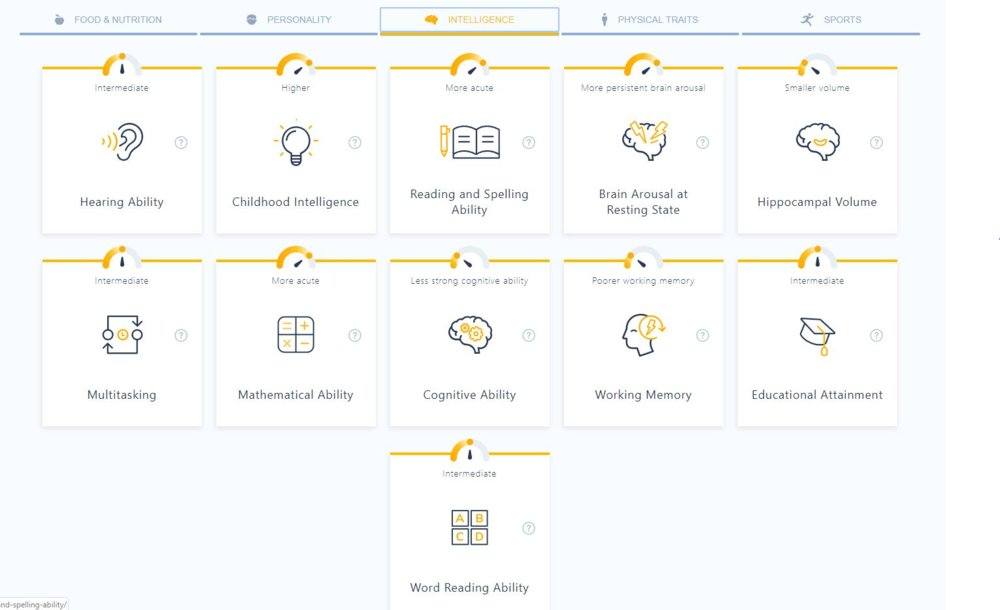 Where did you get this from? Unless it was from a professional psychologist, psychiatrist, or someone else in a closely related field then these results are almost entirely meaningless.

Edit: I just realized this was 'genetic' intelligence results. I've never heard of this before and I would be extremely wary of any test that tries to link genetics with intelligence. The brain is enormously complex and is far more than the sum of its genes. Education, upbringing, the environment, and sheer luck have a great deal to do with how your brain grows and develops.
Ygggdrasil
Science Advisor
Insights Author
Gold Member
2019 Award

When geneticists use the word prediction, they give it a different meaning than the rest of us do. We usually think of predictions as accurate forecasts for particular situations. At a carnival, you might encounter a man who promises to predict your weight simply by looking you over. If you weighed, say, 130 pounds, and he guessed 132, you might be impressed. If he guessed 232, you’d expect to walk away with a giant teddy bear.

Geneticists are a lot more forgiving about predictions. When they try to predict a trait from a set of genes, their prediction may be dead on, or it may be no better than random. Or, as is almost always the case, it is somewhere in between.

Genes that predict the variation in a trait perfectly in a group of people have a predictive power of 100 percent. If they’re no better than what you’d get from blind guesses, their power is zero. The Amsterdam team tested their 52 genes on thousands of people and concluded that the genes have a predictive power of nearly 5 percent. Their predictions are less than random, but if you used them to predict individual people’s intelligence, you’d give away a whole lot of teddy bears.

Please help me with genetic therapy

Is homosexuality is the result of genetics

Does My Height Make Sense for My Genetic Makeup?

What does "Genetic Code" mean?