Process of a sun changing into a white dwarf

TL;DR Summary
Sun will change to red giant then to planetary nebula and finally to white dwarf.

I want to know this process a little deeper so I searched and found this site:
https://theconversation.com/the-sun-wont-die-for-5-billion-years-so-why-do-humans-have-only-1-billion-years-left-on-earth-37379

This is part of the text from the link: 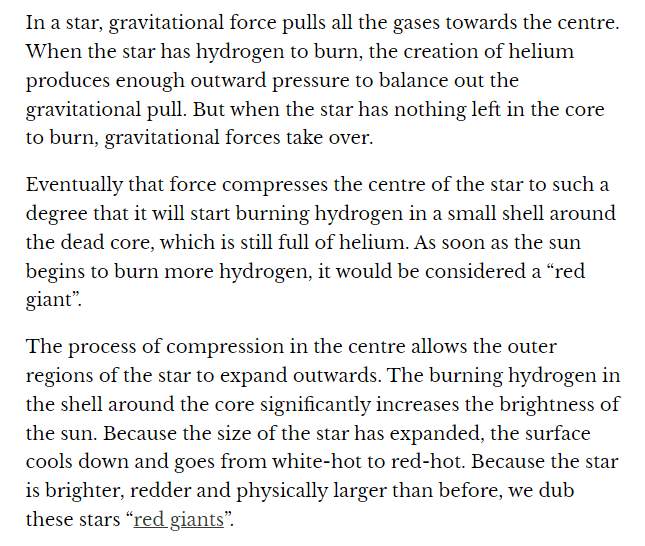 I want to ask several things:
1.
From the second paragraph: "As soon as the sun begins to burn more hydrogen, it would be considered a “red giant”. "

But from first paragraph: "But when the star has nothing left in the core to burn, gravitational forces take over".

I don't understand that part. I know energy is produced in core of the sun by nuclear fusion (fusing hydrogen to form helium) until hydrogen is used up but why the sun will begin to burn more hydrogen?

And also, what does it mean by "hydrogen in a small shell around the dead core" in second paragraph? I thought the hydrogen has already been used up?


2. From the third paragraph:
a) why the outer region of star expands outwards when the core collapses due to gravitational force?
b) why the burning hydrogen in the shell around the core significantly increases the brightness of the sun?
c) why the surface cools down?

3. How red giant can turn into planetary nebula?

songoku said:
And also, what does it mean by "hydrogen in a small shell around the dead core" in second paragraph? I thought the hydrogen has already been used up?

Very good questions. I'm not an expert in this field but I see on thing in the text you quoted that you seemed to miss. The hydrogen in the core has been used up. There is still hydrogen in the star but outside the core. The shell they refer to is the part of the star outside the core. So to fully understand, you must keep in mind that conditions in the star vary dramatically depending on the distance to the center.
Bandersnatch
Science Advisor

I don't want to paint myself as any sort of an expert either. The following is in large part relaying what I gathered from skimming D.Prialnik's introductory textbook. Hopefully without much distortion. The OP may be better served by picking it up themselves.

Re.1:
For fusion to occur, minimum temperature and density is required, and higher levels increase the rate of reactions.
The density and temperature conditions within a star vary with radius, both increasing towards the centre.
During the majority of the life of a star, the only place where conditions for hydrogen burning are sufficient, is the core region.
The energy production in the core supports it against its own weight and the pressure of the envelope. When the hydrogen in the core is finally depleted, it can no longer support itself, and starts contracting - which leads to it heating up. This raise in core temperature heats up the regions above the core, which previously were not hot enough to fuse hydrogen. In this way, the collapse of the depleted core leads to initiation of fusion in the shell above it.

Re.2a:
A star is in a self-regulating equilibrium between the outward pressure of all the energy trying to escape (this takes the form of gas pressure and radiation pressure), and the inward pressure of all the mass bearing down under its own gravity. Should the energy production ever go up, the star will puff up to let the excess energy escape more easily, restoring the equilibrium state.
There's a way of looking at it that lends itself to intuitive understanding without going into the details of the physical processes involved: when the star evolves between equilibrium states, as long as the changes in energy during the transition are negligible compared to the total energy of the star (gravitational, thermal, radiant), the configuration can be treated as conserving potential energy (also thermal energy, separately). That is, if there is a part of the star that collapses for whatever reason, releasing gravitational potential energy, then the rest of the star must swell up to compensate. Since the core is the densest part, its collapse involves large changes in potential energy, which leads to large swelling of the envelope, potentially even unbinding it (i.e. blowing it all away, exposing the core).

Re.2b:
The shell, being previously non-fusing, is rich in hydrogen. The combination of the volume of the shell being comparatively large, and the thermonuclear processes switching to the CNO cycle (which takes over the p-p chain at higher temperatures, and whose reaction rates are themselves very temperature dependent - ~T^16 vs ~T^4 of the p-p chain) means that the overall the energy production increases. One way of seeing why the energy production must be higher, is by realising that the denser core pulls much more strongly on the same amount of gas in its immediate surrounding, so it takes more energy to balance the additional gravitational pressure.

Re.2c:
You have more energy being produced, i.e. the luminosity of the star increases. If the size of the star were constant, this would mean the surface temperature going up (hotter black bodies radiate more, and stars behave like black bodies). But the star swells up to maintain the aforementioned equilibrium. Larger radius of the star means larger surface area. Larger surface area radiates more. The increase in surface area is larger than the increase in luminosity, so each unit area of the surface (each square metre or whatever) radiates less. Again going with the black body behaviour - lower radiance means lower temperature.
Another way of seeing this, is as a reverse of what happens to the core as it contracts - contraction leads to heating up (gravitational potential energy is converted into average kinetic energy), while expansion leads to cooling down (KE->PE).
Yet another way is by using that bit about the configuration of the star conserving thermal energy - from the core region heating up must follow that the rest of the star must decrease in temperature to compensate.

Re.3:
While the details of the physical processes vary as the star follows its evolutionary path, the same principles as discussed above hold. For a certain range of stellar masses, eventually the central part of the star contracts enough (igniting various fusion processes along the way, depending on mass) to completely blow away the material in the envelope, in a process similar to (but stronger than) the regular stellar wind, exposing the core. The blown-away material is what constitutes the planetary nebula.
PeterDonis
Mentor
Insights Author

songoku said:
why the burning hydrogen in the shell around the core significantly increases the brightness of the sun?

That had puzzled me too for a long time. An argument that I found plausible is that helium burning can proceed much faster than hydrogen burning, once high enough temperatures have been reached. Of the four protons that eventually make up a helium nucleus, two must be converted to neutrons, and that involves the weak interaction. The p-p process is an extremely slow process. The triple-alpha can proceed comparatively swiftly, once the necessary temperature has been reached. The energy yield per reaction is lower, but there will be more reactions, and the total energy production much higher.
As Bandersnatch has explained, stability requires that the star expands, and it gets rid of the energy via a vastly expanded surface area.
songoku

Suggested for: Process of a sun changing into a white dwarf

B Evolution of planetary system around a white dwarf

I Is there a difference between ultracool dwarf and brown dwarf？

B Nature: "A massive white-dwarf merger product before final collapse"

I Any evidence of white holes in the universe?

B Is the Earth falling into the sun from gravity?