TL;DR Summary
At least two species of sea slug species can amputate their bodies from their heads and then regenerate the body. Presumably to rid themselves of internal parasites. 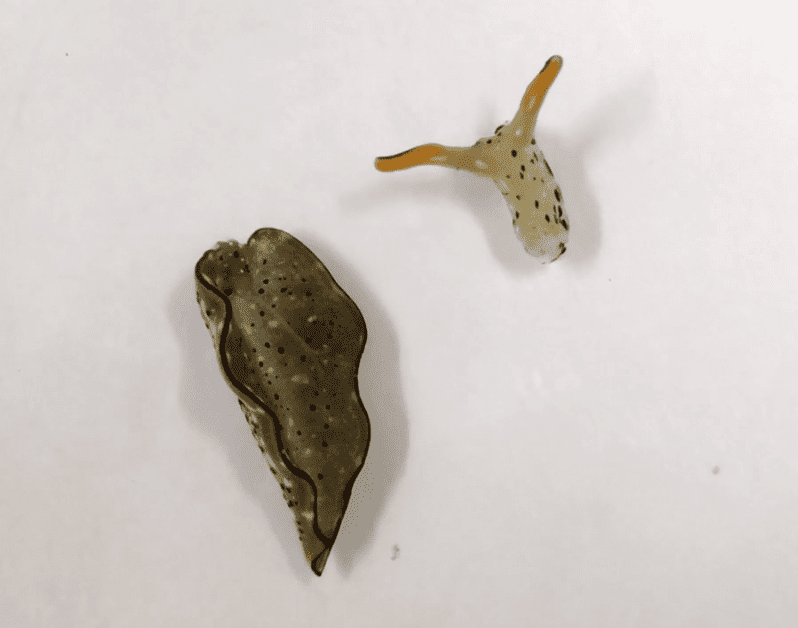 Two species of sea slug (like a snail without a shell) have been shown to be able to amputate their bodies from their heads and then regenerate the body.
It is hypothesized that this is done to rid themselves of internal parasites.


It was as if the sea slug had dissolved the tissue around its neck and ripped its own head off. Self-amputation, known as autotomy, isn’t uncommon in the animal kingdom. Having the ability to jettison a body part, such as a tail, helps many animals avoid predation. However, no animal had ever been observed ditching its entire body.

She added that she expected the slug “would die quickly without a heart and other important organs.” But it not only continued to live, it also regenerated the entirety of its lost body within three weeks.

The head wounds the sea slugs created during autotomy took only one day to heal. Organs such as the heart took an average of one week to regenerate. For most of the sea slugs, the regeneration process took less than three weeks to complete.

Elysia marginata and Elysia atroviridis are often called “solar-powered sea slugs.” They are among a small number of slugs that can incorporate chloroplasts from the algae they eat into their bodies. This let's the slugs sustain themselves, at least partially, on the sugars the chloroplasts produce through photosynthesis.

Having this ability, which is known as kleptoplasty, could be what allows these sea slugs to survive long periods of time without their bodies.

In most animals and even some sea slugs, autotomy is thought to serve only as a means of avoiding predation. But the researchers found evidence that it can also be used to expel internal parasites. All of the Elysia atroviridis that separated their heads had internal parasites, according to the researchers. And by ditching their infested bodies, they successfully expelled them, regenerating parasite-free forms. Parasites were not found in any of the Elysia marginata.

Were I to guess I'd say the head area alone is small enough for direct diffusion of oxygen, so the heart wouldn't be needed until more mass is gained.
BigDon

But then the mystery becomes is the regeneration powered by stored nutrients or organics pulled out of the environment.
BillTre
Science Advisor
Gold Member

Or both.
The mouth still works, but what about digestion?
BigDon

Suggested for: Sea Slug Head Amputates and then Regenerates Body

Medical Regeneration of optics nerves -- How?

Ecology -- Which microorganisms are the main decomposers in the sea?

Neuron's location and signal exchange with the rest of the body

Is there a way to use the hydrogen in the human body?

Could our body deal with trace amounts of unknown chemicals?