The basis for all things that exist

what is the basis for all things that exist ?

does it start with a single atom?

are there atoms that exist in every thing in existence ?

Every unique atom is different and atoms can be the same by protons but different neutrons and electron "shells" around the nucleus. They tend to stick in groups of 2 or more like H2O is 2 Hydrogen (number 1) and 1 Oxygen (you look up the rest) is water. :http://en.wikipedia.org/wiki/Periodic_table
phinds
Science Advisor
Insights Author
Gold Member
2021 Award

Yangyin said:
are there atoms that exist in every thing in existence ?

Atoms are not fundamental particles, they are composite particles. I take it you do not understand what that means. Probably be a good idea for you to study some very basic physics
zerozenones

Phinds is right, atoms themselves do make up all the matter that surrounds you but they themselves are made of simpler building blocks. I'm gonna take a crack at the basic physics that he refers to so you can get an answer where you posted.

In the general sense, it's not wrong to say that everything is made of atoms...since that's true of the vast majority of things that you run into. More specifically tho, you have to say that all the matter around you is made of atoms. But you are also surrounded by light, electricity, radio waves, etc... all of which are as real as the chair you might be sitting on, but are not "matter". Because of that, it's more accurate to say that Everything ("all things that exist") is made of what we call elementary particles, of which there are several. The image below shows you the basic particles of modern physics, but to keep it at a basic level, and pretty much account for everything that you encounter on a daily basis, you only need a few of those. As you may have guessed, things can get pretty darn complicated when you start getting into details. 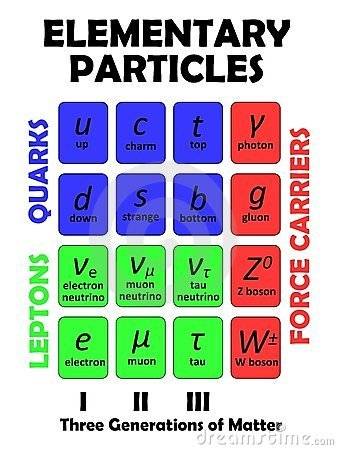 So if we start with our atom, you've probably seen the basic model that looks like a planet with a little moon spinning around it (if not,do a google image search for atom, you'll get the picture). So as you can see, the atom itself is made of smaller particles. The center of the atom is called the nucleus, which is made of protons and neutrons all bunched up together. What is spinning around the nucleus are electrons. Notice that most of the volume of the atom is empty...which indeed means that most stuff is made of empty space oo). Anyway, you can see the electrons in the image up above, but not the neutrons and protons... that's because neutrons and protons are themselves actually each made of 3 quarks. Neutrons are made of 1 up-quark and 2 down-quarks, and protons are made of 2 up-quark and 1 down-quark. As far as we know, that's as deep as the rabbit holes goes, meaning that quark themselves for example don't seem to be made of any smaller parts. Now here's something important (and answer to your last question): all the diversity of matter, what makes the difference between the iron that you need to live and the arsenic that will kill you, between oxygen that is a gas at room temperature and lead that is solid, all of that just comes down to how many of those neutrons, protons and electrons are bunched up together. That right there is the difference between all the different forms of matter that surrounds you.

Hydrogen is the first element, so it has 1 proton in its nucleus with 1 electron spinning around it. Helium is element number 2, so it has 2 protons and 2 neutrons in the middle, orbited by 2 electrons...and it goes on like that all the way to ununoctium, element number 118. Then of course atoms assemble into molecules and the diversity of properties goes exponentially bigger. For example, you may have heard water being referred to as H2O, which means that water is a molecules that is made of 2 atoms of hydrogen (H2) and 1 atom of oxygen (O).

Now all of these atoms were not all there to begin with right after the big bang. There was pretty much only element #1 at that point, hydrogen. But if you take 2 atoms of element number 1 and fuse them together... 1+1 equaling 2 as usual, now you have #2, helium. To have all the other elements, you just need to keep combining (fusing) atoms together. Easier said then done however. Atoms don't just combine like that...otherwise everything by now would just be 1 gigantic blob of that ununoctium stuff... you need to squeeze them together mighty hard for them to fuse. The only place this happens in any significant quantity is inside a star. Then when the star blows up at the end of it's life, it seeds the universe around itself with bigger atoms, new elements... This means (and this is my absolute favorite science fact of all) that except for hydrogen all the atoms around you and indeed inside you, were cooked up inside a star. You are literally made of star dust.

The other big player in the image above is the photon, which is what light is made of. Radio waves, micro waves, x rays, UV rays and gamma rays are all made of photons,it's the wavelength of those photons that gives it different properties, but it's all photons.

The rest of them don't do much...except that the universe just wouldn't work without them :D ...so what I mean is that you don't really need to worry about them unless you start getting deeper into physics. Neutrinos are cool tho: look at your fingernail... there's like a billion neutrinos going through it every second (the sun makes them) but as you can tell, they don't interact with matter very much hehe. Also, each of these elementary particle has a corresponding anti-particle (so anti-electron, anti-muon, anti-up quark etc..) which is exactly the same except that it's charge is opposite. That's what "anti-matter" is and because of that opposite charge, when it comes into contact with regular matter, they cancel each other out and are fully converted into energy. Einstein's famous E=mc2 shows that we are talking about a very large amount of energy indeed here... for example, in the Hiroshima bomb, the fission process (basically braking apart atoms of plutonium) converted about 1 kg of matter at less than 1% efficiency...matter anti-matter annihilation converts at 100%... big kabooms indeed. Thankfully, you don't need to worry about anti-matter to much. There might be the odd particle out there somewhere in space but otherwise you have to make it in a particle accelerator, and even there we're talking about amounts so small that as powerful as it is, that much poses no danger.

Speaking of space, all kinds of crazy stuff does happen to matter out there that can put a lot of exceptions to some of the things I've just explained. Neutron stars for example (the leftover cores of massive stars that have exploded - or gone supernova) have so much gravity that the electrons crash into the nucleus and combine with the protons to make more neutrons. See, protons have a charge of +1 and electrons have a charge of -1, neutrons have a neutral or 0 charge and since 1-1=0, you end up with just neutrons all packed together without all that empty space that atoms normally have. That means that this matter is seriously dense stuff. A neutron star is small, no bigger than a city, but it weights as much as the sun... or if you prefer, a teaspoon of the stuff would weigh about 5 500 000 000 000 kg

Anyway, That's enough for today. I wrote this assuming you are quite young or that you really know basically nothing about physics. If that's not the case and you found this annoyingly basic, I apologize and hope it'll serve someone else. If you are indeed just beginning your inquiry into what is actually going on in the universe you inhabit, enjoy the journey, it is a most wondrous road!
Share:
Share

Related Threads on The basis for all things that exist

I How do I show a skeptic that atoms/molecules actually exist?
4

S
Do atoms exist in a vacuum?
3

B Do you think quantified things exist in reality?

KG and SEC as the basis of all units?

R
I Force that binds atoms

Experimental observations of anti-atoms and/or anti-molecules

V
Are all atoms considered to be isotopes?