The wrong turn of string theory: our world is SUSY at low energies

arivero said:
Note that recently Hill has started to use the expression "scalar democracy" for an idea of composite scalar sector very in the spirit of the sBootstrap, but at Planck scale. See section III A of https://arxiv.org/abs/2002.11547 for an instance.

Is not Hill doing the exact opposite? He is binding the top (and I am not sure if all the top - light quarks pairs too). While we need to bind all the non-top pairs.
arivero
Gold Member

Ah no, he uses all the sectors. Interesting. So the sBootstrap is the complementary subset? 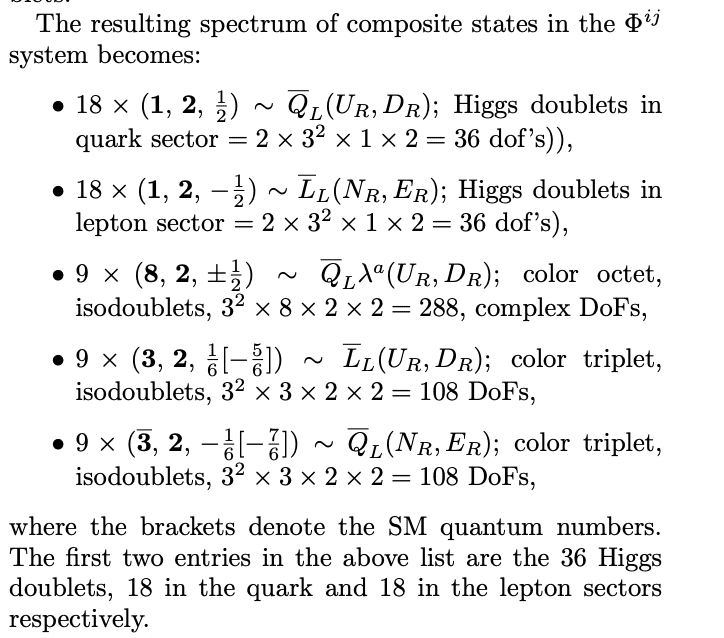 Well, the idea of the sBootstrap in its essence (please correct me if I misrepresent it) is that by considering superpartners of diquarks and mesons formed from the five light quarks udscb, you get all the fundamental fermions of the standard model. So first you have to add supersymmetry to Hill's scenario. But okay, maybe we can do that.

More vexing is the circularity of the sBootstrap with respect to the light quarks themselves. One way around this is to think in terms of UV and IR. The "fundamental" udscb can be UV degrees of freedom, and the "phenomenological" udscb can be IR degrees of freedom. To me this suggests Seiberg duality, and Strassler's 1995 paper in which he describes deforming N=2 Nc=3 Nf=6 super-Yang-Mills, to get an N=1 theory in the IR which has emergent meson superfields. It's as if we want a version where one of the six flavors has a mass even in the far UV, while the others remain massless, but in the IR we still get back six quark flavors as well as emergent leptons.

If we follow this logic, it means out of Hill's "spectrum of composite states", we only have those formed from quark fields, since in the UV where the binding occurs, only quark fields exist. The leptons will emerge in the IR, as superpartners of Hill's (1,2,1/2) states.
Log in or register to reply now!

Related Threads on The wrong turn of string theory: our world is SUSY at low energies

What is the current status of susy and string theory?

A Unifying String Theory and SuSy

If SUSY is found, is String Theory the expected why?

Is SUSY theory necessary at this point?