It was pointed to me yesterday that we should see these by the same guy that sends helium filled balloons around the world (his latest is in the air for about half a year now), I posted about him some time ago. He posted an image from his weather station yesterday, showing the first spike, so I checked mine - and it was visible as well. Turned out many more people in his bubble have weather stations reporting/registering pressures so there is a bunch of observations from around Poland, probably enough to even do some crude triangulation. We quickly realized that the wave should be visible again several hours later, once it travels around the world in other direction. It was the first thing I checked in the morning - and yes, it is there. But reversed - which I don't get. Any ideas about physics behind? Something happened when the waves converged on the eruption antipodes? 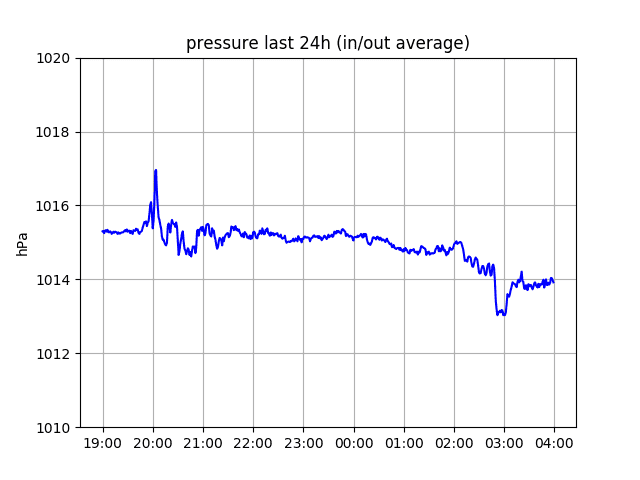 (and if anyone is interested in more plots - comments and discussion are in Polish, but the images are universal ;) )

Both of those times seem to be consistent with a shock wave propagation speed of 1091km/h, which is around a typical speed of sound at 30,000ft according to this table:
https://www.engineersedge.com/physics/speed_of_sound_13241.htm
Jonathan Scott
Gold Member

My thoughts on the change in pressure:

The shock wave is equivalent to suddenly shifting a mass of air forward along a circular front. The transient changes in pressure will be large but will average out. However, as the location is more than half way round the world from the source, the first shock wave will be displacing that air in a shrinking circle, but the second will be displacing that air in a growing circle. So the overall effect will be to temporarily increase the pressure the first time and temporarily decrease it the second.
Share:
Share

Suggested for: Tonga eruption shockwave and weather station(s) in Poland

Truth and facts about the MBTI Meyers-Briggs test/s

News US Troops Enter Poland, But For How Long?

CO2 shortage affecting beer and meat supply in US

Inclusivity and sensitivity: a term