So, I'm watching Gravity for the third time, I absolutely love the movie, but something bothers me every time I see the giant debris cloud hurtling through space. Now granted most of my experience in orbital mechanics comes from playing Kerbal Space Program so I'm no rocket scientist. But as I understand it two objects in a circular orbit around (the earth) at the same altitude are going to be traveling at roughly the same relative speed. So it would seem to me that for the debris cloud to behave as it did in the movie it would have to be moving in a retrograde orbit. It just seems to me that the way that Kessler syndrome is depicted in the movie isn't entirely realistic, which of course seems intuitive, considering it's a movie and had to be entertaining.

But it does bring to mind some questions of how a more realistic and less dramatic representation of Kessler syndrome would look.

I'm approaching this more like a thought experiment, since my understanding of the math involved is, quite frankly, not very good.

So, in order for an impact to occur, at least one of the objects would have to be in an eccentric orbit, at the same altitude but in different directions, or a combination of the two. Looking at the former, its my understanding that there aren't very many man-made satellites in highly eccentric orbits. So, for the most part, it seem to me that objects travelling in roughly the same direction at roughly the same altitude aren't going to be travelling very fast relative to one another (maybe a few m/s difference? I'm not really sure) Since we're not dealing with billiard balls here but (relatively) lightweight material, not all of the force imparted from an impact is going to translate directly to change in velocity.

So, in short, I guess what my question boils down to is what kind of numbers are we looking at here? I imagine a Kessler syndrome scenario isn't going to play out in the time it takes to watch a feature length film. But for things that didn't use to crash into each other to start crashing into each other something is going to have to change. But how much change are we talking? You read an article where they say 'satellites are flying through space at 22,000km/h', but that seems to leave out the big picture. They're travelling at that speed relative to the earth, not each other.

Anyway, some elaboration would be appreciated. Thanks, guys.

Seems to me you could have a pretty substantial transverse velocity between them.

(Of course, it would be pretty tough to get them to intersect a second time.) 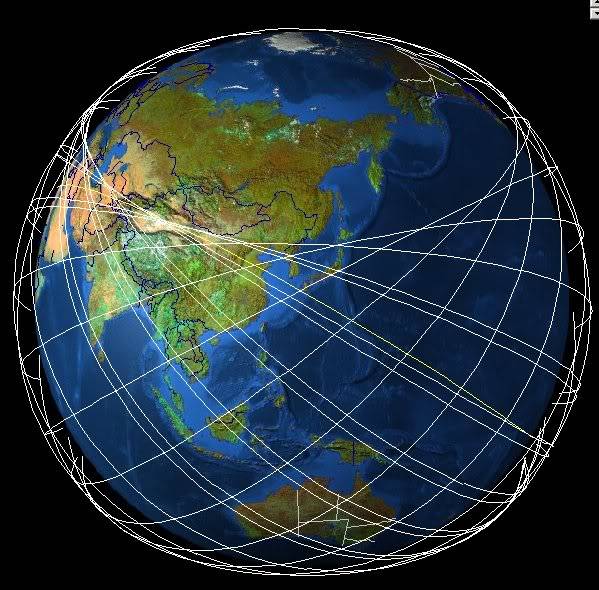 Okay, I suppose that puts it into perspective a little bit more. Two objects meet at one point travelling in different directions (say one with a heading of 45 and another of 135 worst case scenario), collide and break apart Now, instead of two cannonballs you have 20 bullets like a shotgun spread. Even still LEO is from what 60 km all the way up to 2000km? It's a pretty big place, and I'd imagine we make full use of it. How many satellites share the same altitude? (I'll look this up myself, at any rate) If our two objects collide and spread their debris all over like dandelion seeds, is there enough force in that impact to send that debris into eccentric orbits, or is it just a matter of waiting for the next big, unlucky satellite to fly into the path of the 'shotgun blast'?
Matterwave
Science Advisor
Gold Member

The movie had some artistic license. The Hubble space-telescope (@559km) is in a way different orbit than the ISS (@400km), for example, and they showed them to occupy roughly the same orbit (or else it would be really hard to go from one to the other!).
makrisj

In real life, similar events have happened - An example is the 2009 iridium 33 / cosmos 2251 collision over the Siberia.

Their velocities were at the order of 7.5 km/s (altitude 780km,or 480 miles) and their relative velocity nearly 1.4 times higher as their velocities were almost normal to each other. What happens in such events is that due to the enormous kinetic energies involved the spacecrafts are teared apart to thousands of small pieces, each having different kinetic energies and accompanying different orbital parameters after the event. That results to changes in orbital parameters and the formation of a debris cloud occuping not only both orbits, but given enough time the whole orbital "shell" will be covered with debris from that collision.

A very descriptive simulation can be found at this link:

The movie has a really unrealistic depiction. Satellite/satellite and satellite/debris collisions happen and they can increase the rate of debris, but even in the worst case that is a process that takes months to decades. It does not happen in a matter of hours. It would not make a dense cloud like in the movie - it would lead to many individual parts with completely different orbits.
In addition, a Kessler syndrome would not follow the plot - hit the space shuttle first but leave the other stations intact, then hit the ISS but leave the chinese station intact, and finally hit the chinese station right in time for the story...
Share:
Share

Related Threads on What would Kessler Syndrome really look like?

Light speed moving objects -- What would it look like?

Tidal Locked to a Red Dwarf? What Would the Calendar Look Like?

N
If you could see gravity what do you think it would it look like?

What *would* the night sky look like if we could see the entire EM spectrum?

I
What does the sun look like from Mars?