Where between two charges does voltage = 0? 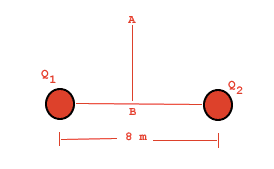 If Q1 in the above figure is twice Q2 and both are positive, where can a point of zero potential be found?

If both charges are positive, it couldn't be between the two points either. Although there would be a point somewhere between the two charges where the force on a positively charged object would be zero, the potential would be less at some vertical distance above that point, so the potential wouldn't be zero anywhere except at an infinite distance away from both point charges.

The question was mis-worded and corrected below, so that one of the charges is negative and the other positive. In this case there would be a point where the potential is zero.
Last edited: Feb 5, 2015
Sylvia

But I thought voltage was a scalar?
rcgldr
Homework Helper

Sylvia said:
But I thought voltage was a scalar?

Voltage is defined as the difference in potential per unit charge between two points, say A and B. The voltage from A to B is the negative of the voltage from B to A, so in that sense it has a direction. Link to article, look at the lower half of the page where infinity is used as a reference point:

As corrected in my previous post, there's isn't any point within finite distance of two positive point charges where the potential is zero (it can be considered to be zero at infinity).
Last edited: Feb 5, 2015
Sylvia

SORRY for the confusion, I accidentally copied and pasted the wrong question. The actual problem is,

If Q1 is negative and twice Q2, which is positive, where will the potential be zero?
rcgldr
Homework Helper

Depending on how you interpret the wording of the exercise, one point with potential zero is already an adequate answer.

Related Threads on Where between two charges does voltage = 0?

Electric PotentialFind the electric potential midway between the two charges

Location where the electric potential is zero between charges

Help with determining distance where electric potential is 0