Which block will strike first? Left or right? 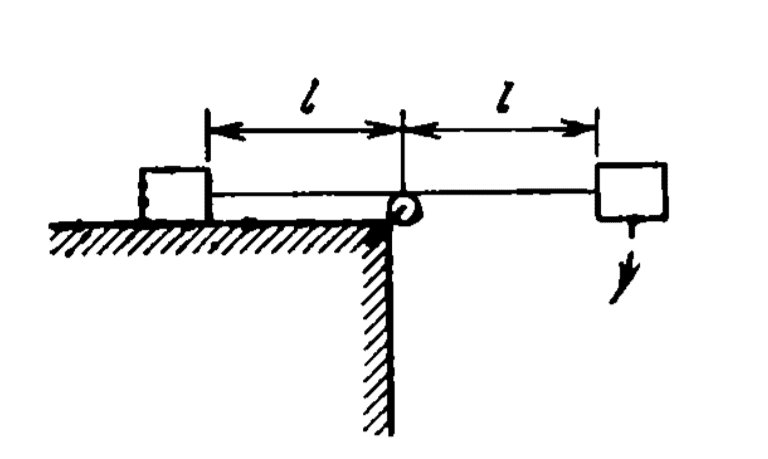 A block of Mass 'm' is connected to another block of Mass '2m' through a weightless pulley by a
weightless inextensible thread of length 2l. The left block(mass=2m) rests on a table at
a distance l from its edge, while the right
block is kept at the same level so that the
thread is unstretched and does not sag, and
then released.

What will happen first: will the left
block reach the edge of the table (and touch
the pulley) or the right block hit the table?

This question was in SS Krotov but with equal masses and was solved easily by observing the direction of net force on the system but when I tried to solve the question for unequal masses I was not able to reach any result.

If the masses had been equal then the left block would strike first as the net force on the system is towards the right and at the initial moment the centre of mass of the bodies is on the pulley so the net force towards the right will shift the Centre of Mass to the right and left block will have to reach the pulley first.
But if the left block has mass 2M then the cenCen of Mass is not on the pulley and nothing can be said by reasoning... also on making equations I was getting unable to solve as the I had got non-integrable functions

Can you show us your FBDs and the equation work you have done so far? Also, the surface is frictionless?
Qmechanic18

berkeman said:
Welcome to the PF.

Can you show us your FBDs and the equation work you have done so far? Also, the surface is frictionless?

berkeman said:
Can you show us your FBDs and the equation work you have done so far?

Related Threads on Which block will strike first? Left or right?

L
Which bulb will get fused first?

Which block falls off the table first? - Elastic collision

Limits from left and right

F
Thermodynamics and Atomic/Nuclear Physics Left to self-study. Which one first?