Why aren't there any space tugs in use?

Ion thrusters are capable of providing the same amount of delta-V for far less fuel (e.g. Falcon 9 v1.1 second stage specific impulse is 340 seconds, while some ion-thrusters have a specific impulse of over 10000 seconds).

Ion thrusters have excellent life expectancy. NASA's NEXT ion drive continuously operated for over 5.5 years and after that the engine showed little signs of degradation. Rocket motors are not that reliable.

Ion thrusters have been tested and performed very well in numerous space missions, including Dawn, Hayabusa 1 and 2, Smart 1, GOCE, Deep Space 1 and more are upcoming. This concept isn't particularly new or experimental.

So why don't we use them to lift everything from LEO? They can use ~30 times less fuel, and fuel in space is very expensive. Why do we still need rockets going above LEO for unmanned spaceflight? Why develop super-complicated harsh-reentry capable reusable rocket technology when we can have spacecraft lasting for decade(s)in a stable space environment? They proved to be powerful enough to withstand air drag at very low orbit (only 255 km above the surface of Earth). What are the problems?

What are you using for an energy source?
EpicAll Rounder

The Ion Thruster is still a very low-thrust engine which would need many of them to be used as a tug. The Thrust-to-Weight ratio of an ion engine is too low to be used in LEO effectively, so it would be too power consuming to power the Ion Thruster. Even if a particular spacecraft had the power sources available, the amount of maintenance needed to use the power would be so extreme that a craft may need a crew member or two made to just EVA everyday to repair the power source. (This is for solar) Also, if a space craft used RTGs (Radioisotope Thermoelectric Generators) like the ones Voyager and Dawn used, it would be too expensive and dangerous for the craft as the intense radiation could damage the electronics and give the crew fatal doses of radiation. That is why the Ion Thruster is only used on light weight and unmanned probe craft.

But yes, the Ion Thruster is generally awesome. :)
lpetrich

How much delta-V does one need to get from low Earth orbit to geostationary orbit? From Delta-v budget - Wikipedia, about 6.0 km/s. With a specific impulse of 30 km/s, that means m(inital)/m(final) = 1.22

How much mass does one have to move? FCC Satellite Learning Center: How Big Are Satellites? Some communications satellites weigh up to 6 tons. Calculating engine firing time from ((mass)*(delta-v))/(thrust), I find 70 engine-years. So even if one uses a big cluster of NSTAR engines, it will take a *long* time to get the satellite into is working orbit.
TEFLing

How much delta-V does one need to get from low Earth orbit to geostationary orbit? From Delta-v budget - Wikipedia, about 6.0 km/s. With a specific impulse of 30 km/s, that means m(inital)/m(final) = 1.22

How much mass does one have to move? FCC Satellite Learning Center: How Big Are Satellites? Some communications satellites weigh up to 6 tons. Calculating engine firing time from ((mass)*(delta-v))/(thrust), I find 70 engine-years. So even if one uses a big cluster of NSTAR engines, it will take a *long* time to get the satellite into is working orbit.

I want to clarify the mathematics...

Since one year is about 32Ms

But it would take over a decade

I concede my mistake. It would take about 13 engine-years. So a cluster of 7 engines would do it in about 1.8 years, and a cluster of 19 engines about 8 months. I'm using hexagonal arrangements here.
mfb
Mentor
Insights Author

19 engines will need about 40 kW, that will need huge arrays of solar cells that have to be added to the mass. Plus some batteries if the planned orbit change requires to use the engine on the night side.
D H
Staff Emeritus
Science Advisor
Insights Author

mfb said:
19 engines will need about 40 kW, that will need huge arrays of solar cells that have to be added to the mass. Plus some batteries if the planned orbit change requires to use the engine on the night side.

Compare that 40 kW with the solar power arrays on the International Space Station, which generates up to 84 kW. The Space Station is in Earth shadow more than 1/3 the time, which means that that 84 kW averages to 50 to 55 kW. That's just a bit over your 40 kW. In other words, this 19 engine tug will need an solar array that is about the same size as that of the Space Station. On the ISS, those arrays, the structure that holds those arrays, the motors that turn the arrays so they point toward the Sun, the batteries, and 8 miles of wire add up to a lot of mass.

This need for large amounts of electrical power presently is electrical propulsion's Achille's heel. If only we had a space-based nuclear power plant!

That Achille's heel hasn't stopped NASA from looking into using solar electrical propulsion as the basis for a space tug. NASA issued four contracts in 2011 to study doing exactly that: http://gizmodo.com/5891500/space-tugboats-are-exactly-what-they-sound-like. Those were but paper studies, but yes, NASA and other space agencies are quite interested.

That said, the use of electrical propulsion space tugs isn't nearly as easy as put forth in the opening post. After all, if it was that easy, NASA or some other space agency would be already be using it.

One thing that hasn't been mentioned: Using solar electrical propulsion to take a vehicle from low Earth orbit to geosynchronous or higher is not a good idea. An ISS-sized set of solar arrays means aerodynamic drag and gravity gradient torque will be serious challenges. Even worse, the vehicle would spend several days, and perhaps several weeks, in the Van Allen belts. The intense radiation there is bad for solar cells, bad for computers, bad for payloads, and of course bad for humans.
Chronos
Science Advisor
Gold Member

Is there any current practical use for such a device - I mean what is out there now that needs a 'tug'?
mfb
Mentor
Insights Author

Chronos said:
Is there any current practical use for such a device - I mean what is out there now that needs a 'tug'?

Every new geostationary satellite could use high-Isp thrusters, but waiting months or even decades for them to achieve their orbit, together with the power requirements, makes that impractical.
D H
Staff Emeritus
Science Advisor
Insights Author

Chronos said:
Is there any current practical use for such a device - I mean what is out there now that needs a 'tug'?

There are a large number of operational satellites (over 200 of them!) that currently use electric propulsion of some sort. 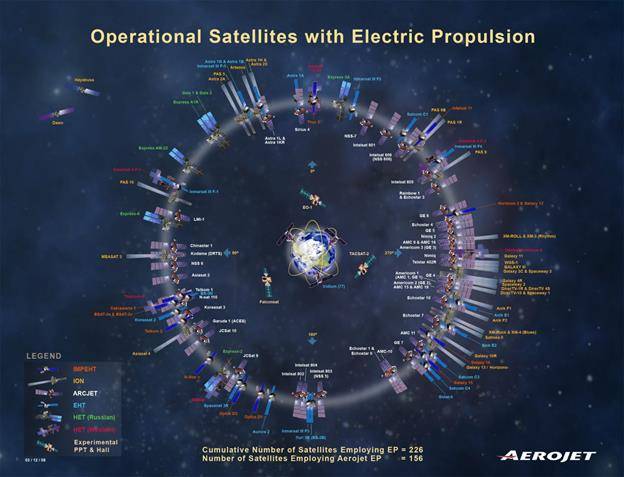 Larger version of the above: http://forum.nasaspaceflight.com/index.php?action=dlattach;topic=27894.0;attach=365255;image

Electric propulsion itself isn't a key problem that makes a space tug near-term science fiction. In and of itself, electric propulsion is at TRL 9 (TRL=Technology Readiness Level), which is the maximum possible score. One of the issues is scaling. Naively, since SEP is at TRL9, just strap a bunch of them together and you're good to go!

No, you're not. Adding more stuff results in stuff interfering with other stuff and requires more resources. Electric propulsion by its nature involves lots of self-interference, and it needs lots of resources. That a rocket needs just as much energy per unit mass to go down as it does do go up is another issue. The rocket equation does not help in this regard. Yet another issue is that any space tug concept involves lots of rendezvous operations. Finally, that electric propulsion is slow is yet another issue. All of these issues currently militate against the use of space tugs.

There has to be a compelling reason for using space tugs that use solar electric propulsion. That compelling reason doesn't exist yet. Those mitigating factors mentioned above are why there are no space tugs (yet). One very exciting idea (to me) is an Earth-Moon L2 space station / fuel depot. This is viewed by many as a key enabling capability that would make travel beyond low Earth orbit much, much cheaper than it is now. Space tugs would play a key role in hauling parts, equipment, consumables, and fuel to the L2 station. Given this capability, a vehicle could arrive at the station, refuel, depart, use the Moon as a gravity assist to dive toward the Earth, and fire thrusters (chemical, not electrical) at perigee, thereby taking advantage of the Oberth effect.

D H said:
There are a large number of operational satellites (over 200 of them!) that currently use electric propulsion of some sort.

Electric-propulsion Satellites Are All the Rage - SpaceNews.com (article from June 2013)

Interest in all-electric-propulsion satellites has reached levels that might lead one to think vast swarms of them will be orbiting the Earth in the coming years. ...

An all-electric satellite dispenses with heavy chemical propulsion and uses electric propulsion not only to maintain itself stably in orbit over 15 years — this has been done by many operators and manufacturers — but also to raise the satellite from where it is dropped into orbit by its carrier rocket to its final destination in geostationary orbit. ...

The only problem is it takes months, not a couple of weeks, for an all-electric satellite to reach its final operating position.

Some operators may not want to wait six months or so for a satellite to gradually spiral out into position, something that may limit how many all-electric satellites get launched.
Lsos

Since electric thrusters are so slow, they are unable to take full advantage of the Oberth effect. I wonder how much of a delta-v hit that amounts to.
mfb
Mentor
Insights Author

I get ~4.8 km/s for continuous thrust (ground level -> 42000 km radius), compared to ~3.9 km/s for a Hohmann transfer (300 km height -> GEO). The small differences between initial and final height in the two calculations shouldn't matter much, so more thrust saves some delta v.

Related Threads on Why aren't there any space tugs in use?

Are there any *huge* agglomerations of positive charge (or negative charge) in space?

Why is there no symmetry in space vs. time dimensions?

O
Why aren't black holes the brightest objects in the universe?

Why aren't stars in a star cluster attracted to each other?

Stargazing Is there plutonium in space?

Are there rainbows in space?

N
Is there friction in space?

Stargazing Is there any material I can use for an aperture solar filter?