Hi, I've got this question that is asking why mirrors placed in parallel will produce an infinite number of images.

The problem here is that I have no idea if this is correct (I couldn't find anything in my textbox or on the Net) and also , if it is correct, I need a clearer way of explaining it.

ehild said:
right... look at that:

Hey, Thanks man. Cool image. But it still doesn't tell me why it happens.

Thanks anyway though.
ehild
Homework Helper

From where shall I start? Do you know the laws of reflection?

Plane Mirrors placed facing each other (parallel) actually does not produce infinite images, It will though in infinite time.
Say the guy with the phone in that picture leaned on one mirror while the other is placed just over a metre in front. His image(of his anterior aspect that is) will be formed after approximately 1/300,000,000 second. Image of his back will take a further 1/900,000,000 seconds more if he is one foot deep. Now in one second alone we have about 300,000,000 (300 million) images. After just half a minute you'll have enough images to keep you occupied for over 70 years if you can manage to count four images a second. Nothing said of the images behind you. Well, that seems like infinity to us.
willem2 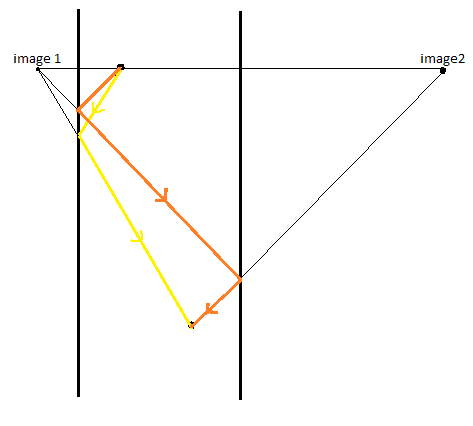 Related Threads on Why do Parallel Mirrors produce infinite mirrors?

L
Diagram of the see-saw and parallel mirrors