Any physics majors feel too dumb to be majoring in physics?

What makes it so difficult is the material is a cultivation of many, many people that contributed a specific piece to the puzzle and now you're learning it all in 4 years time. That's an uphill battle; you're the underdog and whether you succeed or not is up to you. Keep grinding it out no matter what happens.
homeomorphic

I felt smart until grad school (in math), and after 6 years of it and not being able to graduate this year, I feel like a complete idiot. Not everyone feels stupid at the beginning, but almost everyone feels stupid at some point, once they get far enough because it keeps getting harder. But sometimes the people who felt stupid at the beginning can catch up to the others. Even when I didn't do well, I felt smart for a long time because I just felt like I was not that great at taking tests, but was pretty good at understanding things.


I had huge problems with calculus, not with the intuitive aspects but the lack of physical application / motivation for so many of the problems. The problems seemed to usually be just empty symbol-shuffling with no connection to any plausible situation.

Somehow, I don't have trouble with dumb calculus problems, even though I sympathize with your viewpoint. I just look at them as examples where you can compute things and test what you know about the intuitive concepts with calculation. Whether or not it's relevant to anything physical is not really the point. The idea of integration is applicable, so it makes sense to just get good at it by doing lots of examples and then when some example comes up in real life, once you are good at integration, you either work it out or have a computer do it. So, if the general idea of integrating stuff is applicable, I think that ought to be enough, rather than specific problems being applicable. As long as the calculations aren't needed in the further development of the theory, I'm happy.

I am told some people (math major "naturals") can limit the amount of disconnected facts they need to cram into their head by remembering the steps of the derivation and re-deriving as they go, but it seldom works for me.

I'm a math major natural. It's not necessarily the steps of the derivation. I just try to look at it in a way that makes it obvious that it's true. Often, this involves visualization of some sort. Once you get that feeling that it's obvious, a lot of times, it's easy to rederive the proof if you want.


I find the purely symbolic, unvisualizable "Bourbaki virus" approach to be a huge impediment in most math literature.

Yeah, it is pretty ridiculous, but I don't know if the problem is so acute in calculus. In differential equations, it can get pretty bad. But I don't think it's Bourbaki. There are TWO, not one source of bad math today (actually, there may be some overlap). One is Bourbaki-style which is really abstract and unmotivated. But the other source is that of the mathematicians who love ugly calculations, rather than abstraction. Both of these schools of thought HATE conceptual understanding and aspire to make math as ugly as they possibly can.

I have a sneaking suspicion that these mathematicians go to great pains to erase the method that they actually used to arrive at their conclusions and substitute more "elegant" or "rigorous" but less intuitive proofs.

I have a different sneaking suspicion. I think, in many cases, they don't know how to arrive at their conclusions and are just copying from other sources. Of course, they can follow the steps of their proofs, but in a lot of cases, I doubt they could have come up with the proofs on their own. So, probably the erasing when on a lot further back in the past (specifically, I mean, textbooks probably just copy other textbooks and papers).

There may be a reason why this erasing happens, and I don't think it's intentional. Speaking as someone who is trying to write down a fairly involved proof of a new theorem at the moment (the set-up and proof are about 20 pages, as of right now), I can say that I'm not confident that the theorem is true until it is written. Writing a proof down is essentially a way to convince yourself that your result is true. So, the primary purpose of writing a paper is deemed to be to establish the truth of a result, rather than communication. It's hard to worry about the exposition when you are worrying about whether the thing is correct. I hope my thesis will be reasonable clear conceptually, but it isn't optimized for teaching or learning the material. The main thing is to get it written down and checked for errors. With a finite amount of time at your disposal, you might not figure out the best way to convey your thought processes the first time you write something down.

Also, people just copy what they see other people doing. They see lots of other formal math papers and then they get the idea that that is what a math paper is "supposed" to be like. And then they write that way. Or they just get caught up in the efficiency of the abstract approach (doing things in generality means you don't have to prove the same things twice). Or they just aren't very imaginative, so they are unable to visualize anything, which cripples their ability to understand anything, as well as their ability to come up with anything understandable. I don't think they intentionally do it to make it obscure. Although Descartes is said to have done it intentionally.
R.P.F.

Good luck. At least you made into grad school and passed your prelims. A lot of people weren't able to make it to that point.
Lavabug

twofish-quant said:
That prepares you for graduate school in which the professors will start hitting you with problems they have no clue what they answers are to. One thing that happens is that once you start getting used to the system, it becomes second nature enough so that by the time you actually get into a position where you set up the course, you teach it in the same way that it was taught to you.

I haven't seen an undergraduate courses in which every single student fails. I have seen courses in which you are a hyper-genius if you make a 60 on the exam. Personally, if I were giving a final exam to physics majors and anyone came close to an 80 on the exam, I would consider it too easy.

That's assuming I can get into graduate school, which I'm not too confident about with the grades I'm getting on finals (some profs deliberately cap the grade on 2nd and 3rd resits). I should point out that I attend university in Spain, where 5/10 is a passing grade, and where its very common to see billboards with scores of 1's and 2's for courses all through freshman and senior years. Students who never retake several courses and spend less than 7 years as an undergrad are the exception, at least at my institution... which is considered "easy" by people from Madrid's Complutense.
Nano-Passion

QuarkCharmer said:
Here is how I feel: 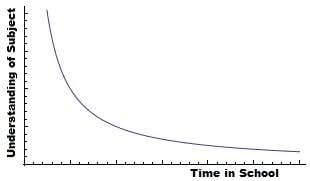 Hmmm.. very interesting. Does the sequence converge to 0?

twofu said:
I'm an undergrad in physics, and I have mostly A's and a B/B+ here and there in my physics/math courses, but I still feel stupid 98% of the time. I think most of the stuff you're saying I can relate to, its pretty normal as most have said..

I can't speak for everyone but in my experience my math department isn't very good at teaching. They assign super easy standard textbook problems (stewart calculus) and then make up their own insane problems for the exams. It's like making you practice running 100 meters and then on race day, making you run a 10 miler. It just doesn't work; math is about practice.

Like most said, just tank through it. physics gets really fun! (2nd semester of E&M rocks, antennas, radiation, and SR derivation!)

My professor did that for Physics II and Calc II. Funny thing was that he kept telling us how easy he will make the test and that it would be a very quick one. After having taken the test and realized that it was the toughest one yet by far, I asked him about it. Later on he admitted that it was tough and he wanted to give a challenge. :rofl:

I've always felt that my professor did that on purpose. I wonder if he was trying to help people out by being condescending or he wanted to flaunt his intelligence.
Last edited: May 22, 2012
Angry Citizen

some_letters said:
are you sure you always have? Think back to introductory physics and calculus courses. Were you understanding most of what was taught? In my case, I can implement techniques after learning them but am left with little working understanding of what I just learned. It works just fine for now but I'm afraid that eventually, my luck will run out despite my interest and fervent effort to keep it going. Creativity isn't in me. Should I look elsewhere?

I can follow a formula, but am hard-pressed to diverge from it and apply other knowledge that I know.

My introductory physics and calculus courses were actually "harder" than my dynamics and differential equations classes, in the sense that I didn't really understand what was going on in those intro classes. Intro physics isn't really designed to teach you physics, it's designed to teach you how to think in terms of physics, how to set up equations, etc. Physics is hard - until miraculously, physics stops being hard. You'll get there yet.

And I agree with the others, don't blame your gender. Girls aren't any dumber than boys; get that out of your head right now.
rppearso

When your buryed in debt to get your first degree in a school with mostly guys and the girls dont give you the time of day, its not a good recipie for success.
Log in or register to reply now!

Related Threads on Any physics majors feel too dumb to be majoring in physics?

Programs Is it too hard? (physics majors)

Programs Im too dumb for my major

Programs Too all prospective physics majors

Programs Too late to major in engineering, will physics do it?

Programs Any tips for a physics major?

Programs Chemistry Major Thinking (too much?) about Physics

Programs Double major in Physics and Political Science - is this TOO much?

Programs What to major in besides physics

Programs To be or not to be Physics Major?HELP