At that time the solar wind was having an effect on Earth due to a stream flowing from a coronal hole on the sun. The interplanetary magnetic field was supposedly pointing north at the time. But perhaps the solar particles briefly turned the field south, causing a brief cancellation of Earth's magnetic field? Curiously, the moon was full and at apogee at vaguely the same time.


From the April 22 edition of spaceweather.com:

A gaseous canyon in the sun's atmosphere has turned toward Earth, and it is spewing solar wind in our direction. NASA's Solar Dynamics Observatory is monitoring the structure, shown here in an extreme ultraviolet image taken on April 22nd: 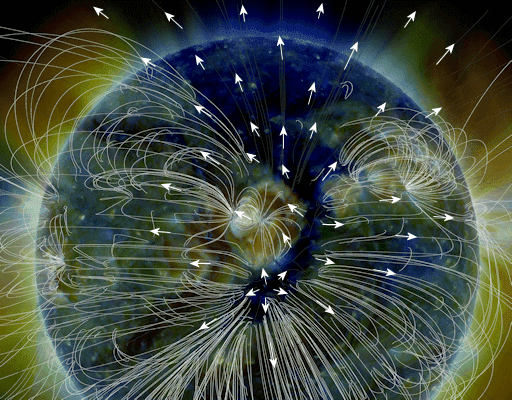 Thanks for your answer, im curious has this happened before? What are some potential outcomes?
Dotini
Gold Member

IbogaMoon said:
Thanks for your answer, im curious has this happened before? What are some potential outcomes?

I'm no expert. But I'm sure this or something quite similar has happened very often, with no particularly alarming outcomes or consequences I'm aware of. Probably auroral activity or penetration of cosmic rays to Earth's surface is briefly affected.
IbogaMoon

I looked into cosmic rays and interestingly enough i found this -

Cool link, thanks that was new to me. Here is something from five or six days earlier.

IbogaMoon said:
I looked into cosmic rays and interestingly enough i found this -

I Magnetosphere on Mars