Can anybody shed some light on anti-lock braking systems?

Can anybody shed some light on anti-lock braking systems?

I currently have a model that calculates a vehicle stopping using kinetic sliding friction i.e. it skids to a stop with coefficient of friction at around 0.7 asphalt/tyre or tire which ever you prefer

ABS I believe maintains static friction throughout the stopping process through millisecond releases. The coefficient of friction is therefore with the brakepads and discs.

Is this true and if so what is the coefficient of friction?

All I can find is steel on steel which is 0.4. This is less than the kinetic coefficient and would result in a higher stopping distance or am I wrong?

Although the coefficient of friction tires-road is higher than brake pads-disc you can get a much higher force from the hydraulics in a brake than the weight on the wheels
The main reason though is that the tires can't sustain that level of friction for very long without being damaged.
Last edited: Apr 14, 2009
revolution200

does anybody know where I can find some real life examples of the forces and pressures exerted by the brake pads?
Ranger Mike
Science Advisor
Gold Member

to shed some light on ABS...
ABS is a system that optimized the braking force in a car. It does this by maintaining the optimum slip ratio (usually around -.1, depending on surface and tires) during braking. when the slip ratio is at its optimum level, the car experiences the greatest force out of the tires, and thus teh maximum braking force.

It does this by changing the pressure at the brake pads. Ideally, the upper controller would look at the velocity of teh car, teh speed of all the tires, and the car properties and determine the optimal brake pressure. then a brake pressure management system would acheive that.

When the slip ratio is a little less optimal, the controller tells the ABS system to increase teh brake pressure.

Increasing and decreasing he brake pressure is done by a fluid "circuit", with solenoids acting as switches to enable different paths for the fluid to travel thus lowering or raising pressure.

So in your saying that maintains static friction throughout the stopping process through millisecond releases is right in the millesecond releases (the solenoids increase or decrese pressure), but they dont exactly maintain static friction. This is more to do with the way a car's tire is modeled than ABS, but teh tire forces you will get out of a tire depepnd on the tire's slip ratio, as i mentioned before, and the ABS system tries to maintain that at an optimal level.
Here is the relationship between tire slip ratio and tire forces for some tire. It is the black line. 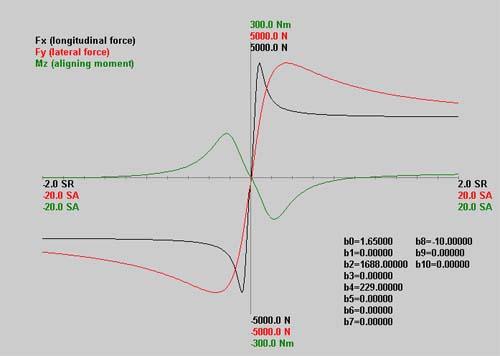 notice how the tire force maxes out at around .1 (for accelerating) and -.1 (for braking). The ABS controller maintains the slip ratio in the area around -.1.
Last edited: Apr 17, 2009
Ranger Mike
Science Advisor
Gold Member

Excellent
this is why this web site is so valuable
don't tell Washington ..they'll want to tax it!
Share:
Share

Related Threads on Can anybody shed some light on anti-lock braking systems?

Automotive Can anybody suggest some forum about internal combustion engines?

C
Anybody can solve this problem?

Anybody know where I can find more info on parafoils?

G
Looking for a part that can lock a spherical bearing.

How can I lock effectly a stepless dividing apparatus