Your consulting agency, with its extensive knowledge of physics, has been subpoenaed to provide expert testimony at an automobile accident case in civil court. The case involves a crash between a Ford Escort car and a tractor-trailer truck.

1. The police department determined that the force required to drag a 130 N (29 lb) car tire across the pavement at a constant velocity is 83 N. Specifications from the truck s manufacturer claim that (for technical reasons) the effective coefficient of friction for truck tires is only 70% that of car tires. What was the coefficient of kinetic friction between the tires and the road for both the car and truck? (Include FBD)

3. The pre-crash angle between the velocities of the truck and car was 90 degrees. What was the speed of each vehicle just before the collision?

a.) The car driver claims to have made a full stop at the light before entering the intersection. He also claims that the truck driver did not see him until after the collision. This would make the truck driver partially liable.
b.) The truck driver claims that the car ran the flashing red light. He also claims to have begun braking in anticipation of a collision; traveling at only 6.7 m/s (15 mph) at the moment of impact.
c.) Police measurements show that the distance for the car from the traffic light to the collision point was 13.0 m(42.5 ft) and the distance for the truck from the traffic light to the collision point was 32.8 ft (1ft=.305 m).
d.) Ford Motor Corporation specifications indicate that the maximum acceleration of a comparably loaded Ford Escort is about 3.0 m/s^2, and the maximum acceleration given for the truck is 1.2 m/s^2.
Who is at fault and why?
​ 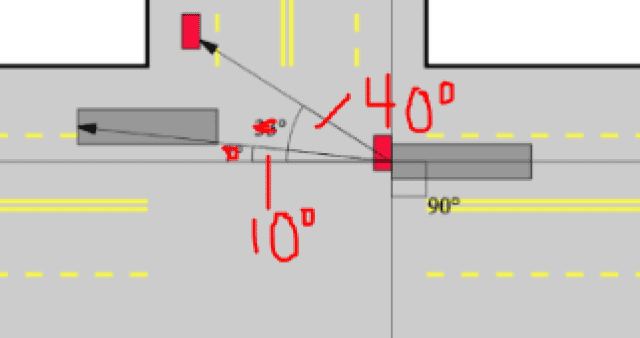 And I get the same.

Don't know how to do 3 and 4.
For 3 I thought it was a conservation of momentum question and tried mv+mv=mv+mv but I really don't know.

Let's chase down the conservation of momentum argument. You have the velocities and masses of the car and truck after the collision. You also know the angles. Momentum is a vector quantity. You can write down equations for the x and y components separately. Can you do that and show us what you get?
Billy12Banana

13.45 for car.
I'm confused as to how to figure out who was at fault using this information and the information in #4 of the problem.
haruspex
Science Advisor
Homework Helper
Insights Author
Gold Member

Billy12Banana said:
13.45 for car.
I'm confused as to how to figure out who was at fault using this information and the information in #4 of the problem.

You have found e.g. the speed of the car at impact. The driver claims to have moved off from rest at the light. What does that tell you about the car's acceleration?
Apply the same to the truck.
Billy12Banana

So since the driver made a full stop, he had to accelerate for 0m/s to 13.45 m.
The truck driver claimed to be braking in anticipation of the collision meaning his acceleration has to be negative.
According to my calculations, the truck's velocity before the collision was 7.09 and 5.09 after. And the truck driver claims to have been traveling at 6.7 m/s at moment of impact. Since 6.7 is between 7.09 and 5.09, it seems like what the truck driver claimed is true.
Is this correct?
In order to utilize parts c and d of #4, do I need to do kinematics?
jbriggs444
Science Advisor
Homework Helper
2019 Award

Can you show that this is implausible?

The truck driver is talking about deceleration prior to impact. You are talking about a reduction in velocity during the impact. Two different things.

There are two different directions. Each equation relates to motion in one of the two, and in each, one vehicle has no prior velocity.
Log in or register to reply now!

Physics of a car crash