Eyesight question -- Do any animals see in a spectrum other than visible light and infrared?

Do any animals see in a spectrum other than visible light and infrared?

Bees and butterflies see into the ultraviolet. But as far as I know most animal vision is rather narrowly centered at the max solar ouput (yellow light).
Drakkith
Staff Emeritus
Science Advisor
2022 Award

Some animals, such as certain insects, can see into the near-UV, but as hutchphd said most animals see approximately the same spectrum as we do.
gleem
Science Advisor
Education Advisor

While pit vipers may not really see they do sense infrared and are capable of finding warm blooded prey in the dark. Apparently some fish, insects, frogs, and vampire bats can "see" the infrared spectrum.
zuz

Yeah. That's pretty much what I thought. Thanks.
Mark44
Mentor
Insights Author

hutchphd said:
Bees and butterflies see into the ultraviolet. But as far as I know most animal vision is rather narrowly centered at the max solar ouput (yellow light).

I found several images of how humans and bees view flowers differently. 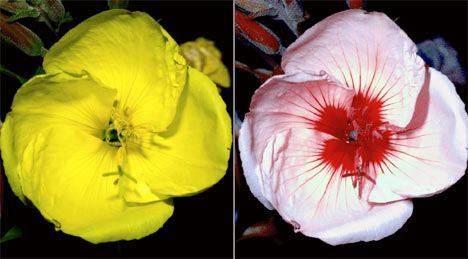 Here's one of a primrose, as seen by a human vs. as seen by a bee, according to Norwegian scientist-cameraman Bjorn Roslett, in the Daily Mail, https://www.dailymail.co.uk/science...-view-How-insects-flowers-differently-us.html. The image on the right is in ultraviolet, which is presumably the part of the spectrum that bees can see.

Because we cannot see UV light, the colours in these photographs are representational, but the patterns are real.

Bees can see near UV which for them is called bee-purple.
Patterns on flowers can provide target patterns leading the bees to the pollen the flowers want (anthropomorphically speaking) the bees to find for pollination purposes.
A variety of animals can also see polarized light also. But not in unusual wavelengths.
Rive
Science Advisor

An interesting example will pop up if you make a search for 'hawk rodent urine trail'
Last edited: Jun 15, 2020
256bits
Gold Member

This is certainly interesting.

The wide variety of nonspectral colours available to birds is the result of their ancient four colour cone visual system.

"Tetrachromacy — having four colour cone types — evolved in early vertebrates," said Stoddard. "This colour vision system is the norm for birds, many fish and reptiles, and it almost certainly existed in dinosaurs. We think the ability to perceive many nonspectral colours is not just a feat of hummingbirds but a widespread feature of animal colour vision.

Snapping shrimp appear to win with 12 to 16 (yes, twelve to sixteen!) "color" receptor cells.
Some of the distinctions may be due to filtering of incoming light by lens chemicals before it gets to the photo receptive cells of the compound eye rather than different receptor molecules.
Some species can detect circularly polarized light.
Not all of the different colors may be combined into a single "colorized" image. Different photoreceptor cells project their connections to different parts of the snapping shrimp brain.
Some of these different "colors" may be involved in mating displays and attractions (which could be separate specialized systems in the brain (small though it be)).
Share:
Share

Suggested for: Eyesight question -- Do any animals see in a spectrum other than visible light and infrared?

How are parasites able to imitate other animals?

Visual Acuity of Humans Greater Than Most Other Animals

Medical What are some terminal illnesses other than cancer?

Billion-year-old fossil, a missing link in the evolution of animals?

First ancestor of Humans and Animals

Why do we consider Neanderthals a different species than humans?