Hi all,
I have been reading the book "Computational Dynamics" by Ahmed Shabana, and have a few questions.
The book talks about creating "free-body diagrams" for constrained rigid multibody dynamics problems.
I have attached two examples:
The first is a "pendulum with a moving base": 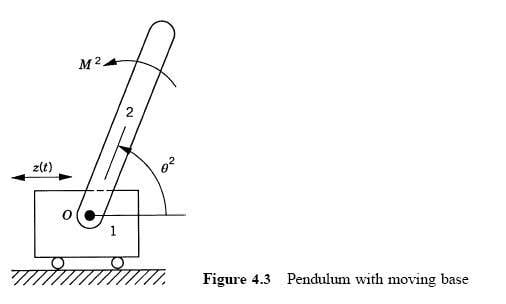 which is described in the book as:
"Body 1 is a slider block that has a specified motion defined by the function z(t). Body 2 is a uniform slender rod that has mass m2, mass moment of inertia about its centre of mass J2, and length l. The rod that is subjected to the external moment M2 is connected to the sliding block by a pin joint at O." 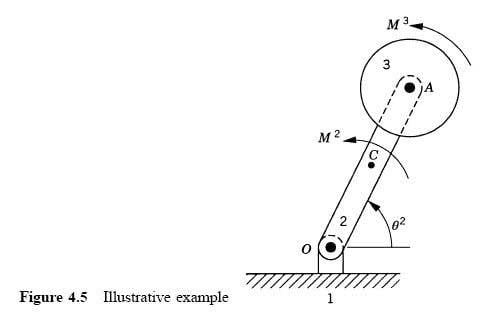 I have also attached the book's free-body diagrams for these two examples. 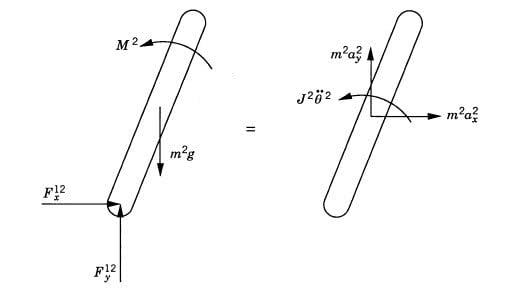 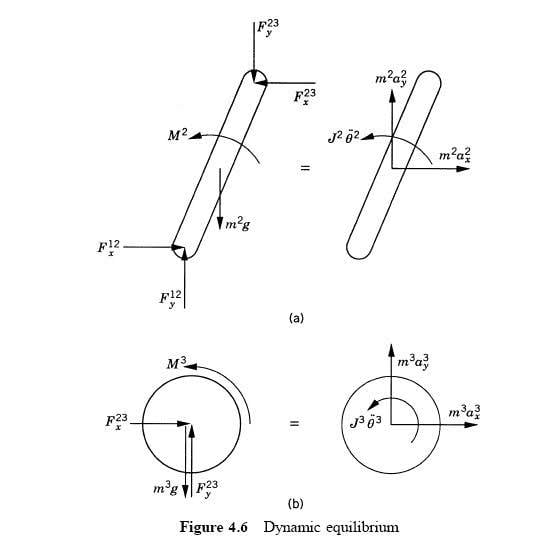 I don't understand how the direction of the joint reaction forces is determined (eg why is F12x directed from left to right in both diagrams)?
Also, are these directions constant regardless of the orientation of the rod? Or will they change as the rod rotates?

Does anyone know of any references that deal with this topic (constructing free-body diagrams specifically for constrained rigid multibody dynamics -
particularly describing how to direct the joint reaction forces)? Any reference would be greatly appreciated, as I haven't been able to find an answer to this question so far online or in books.

Thanks for your help,

The reaction forces in these diagrams result from Newton's Third Law (ie. why doesn't a mass on a table sink into the table?).

Each reaction force only points in one direction, but the reason you see x and y components is because that is the same force resolved to the x and y axis respectively.

To construct free body diagrams, you need to consider all the forces acting on a body. F23x and and F23y for example, would be due to the weight of mass [tex]M^3[/tex].

As the system evolves, all the pieces move, and hence, the directions and magnitude of some forces will change, resulting in the magnitude of the resolved components changing.
Last edited: May 27, 2009
Prismaticus

I do understand how to draw the free body diagram of a book resting on a table but I dont understand how the direction of the X components of the forces was determined in those diagrams either.

Any help would be greatly appreciated