Frictional work inside a circle

You push an object of mass m slowly, partway up a loop-the-loop track of radius R, starting from the bottom, where the normal force to the track is vertically upward, and ending at a point a height h< R above the bottom. The coefficient of friction between the object and the track is a constant [tex]\mu[/tex].
Show that the work you do against friction is [tex]\mu mg(2rh-h^2)^{1/2}[/tex]

I assume that since the mass is being moved 'slowly', I can ignore the usual equations of circular motion, centripetal force, etc. 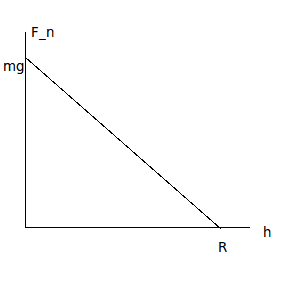 This is where I more or less run out of steam. I know that I ought to integrate it, but for the life of me I can't figure out how to integrate it "along" the displacement (which would be given by the circle). Simply taking the indefinite integral wrt h yields:
[tex]\mu mg(\frac{2rh-h^2}{2r})+C[/tex]
Which is rather similar, but obviously significantly different. I guess what I need is a last nudge to figure out what I'm doing wrong, I feel very close but have just gotten frustrated working on this for so long :(
-Stephen

dW = Ff*dL, where dL is a bit of distance along the circular track. Write dL = R*dθ and you should have a dW as a function of θ that you can integrate from 0 to Φ, the angle when the mass is at height h.

I did quite a bit of messing around (including a Pythagorean formula) to get a nice expression for sin(Φ) in terms of R and h to evaluate the integral.

I had considered more or less the same thing before, but didn't succeed at first and started REALLY overthinking things. Between you and a night's sleep, it all seems rather simple now. Thanks for putting me back on track!
Delphi51
Homework Helper

Suggested for: Frictional work inside a circle

Horizontal circle inside a cone

Find the electric field inside a circle

Work of kinetic friction on block in vertical circle

Work, forces, friction, motion of a block in a vertical circle. (masteringphysics)

[Work/Energy] a particle inside a field

Notation in fluid dynamics: A circle with a horizontal bar inside

Work on an object moving in a circle.