This is a fascinating article and chart for anyone interested in the ancestry of different populations.

It's fascinating to see just how distinct from the rest of Europans that Basques and Sardinians are. Also interesting to see that the Portuguese have the most North-African admixture of any Europan group and that the Greeks have next to none, even though parts North Africa used to be considered ''Greek''. Lots of interesting stuff here for inquisitive minds. 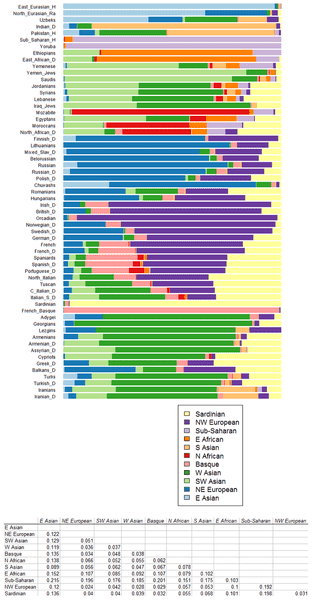 well, my paternal lineage comes from the Basque region, but i am about 10 generations removed, so not likely to be so "pure" now. pretty sure my mitochondrial dna would be native america, e.g., and have recent paternal admixtures with the house of stewart. still, i would say i am a bit of a homebody despite an ancestor with itchy feet, so maybe that's a basque trait. very weird, they must have resisted invasions well, too.

other than that, i can't say i'm too interested in the statistics of it all, but do find some fascination in seeing traits across cultures, like say a certain east asianness in the eyes of Bjork (is iceland considered "finnic"?). i used to think maybe some of those traits were remnants of say the mongonlian empire, but scannign the comments says maybe not?
Share:
Share