Horizontal velocity over an uneven surface

A small ball of m=1kg at height hp = 8m at point p, is given an initial horizontal speed vp = 10 m/s. It slides over an uneven frictionless surface. What is speed vq of the ball at height hq = 3m at point q? 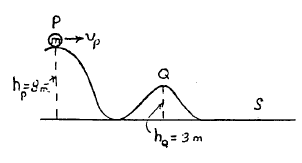 I figured out how to find the velocity at point q, but when I first did the problem, I thought that the horizontal velocity wouldn't change because there is no horizontal force acting on the ball. The surface is frictionless, so going back to kinematics, if you throw a ball at an angle, the horizontal velocity doesn't change because gravity only acts downward, so I thought it would remain at 10 m/s. But the speed actually increased to 14 m/s after I solved it using the total energy equation.
Why was my first way wrong?

In this case the ball isn't falling, but sliding. The surface exercises a normal force on the ball that is directed perpendicular to the surface (hence the name normal). That normal force has a non-zero horizontal component, so it increases v when the ball goes down, and it slows the thing down when going uphill. Roller coaster physics !

(Of course, at Q the normal force is straight up again).
rasen58

Related Threads on Horizontal velocity over an uneven surface

Conservation of Energy and frictionless pulley?