How does Europe still have a lot of money?

mheslep said:
I think above the term used in various places above was meant to be imperialism, not colonization. Colonization has likely been going on since the beginning of homo sapiens.

True, but I'm pretty sure the OP is referring to the European colonial era, which is the specific period of time during which European countries colonized most of the world. http://en.wikipedia.org/wiki/Colonialism

But I do get the contradiction: since colonization has happened for most of human history, as an overall human pursuit, it doesn't have any connection whatsoever to industrialization. At the same time though, certain eras may have had specific motivations/causes.

What you referenced doesn't seem to me to match what the OP was after.
AlephZero
Science Advisor
Homework Helper

mheslep said:
From Maddison, the primary source for all the pre-industrial era GDP figures. GDP per capita: 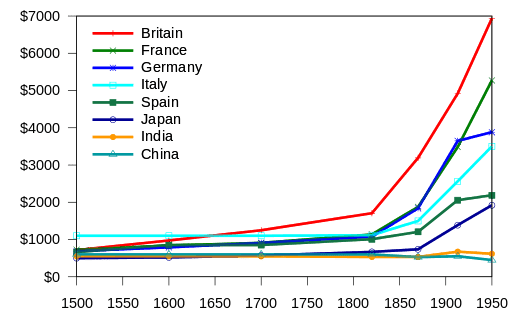 Hm... I wonder how he worked out exchange rates against the US dollar in 1500?

(And the graph doesn't say whether or not the money values are adjusted for inflation.)
mheslep
Gold Member

AlephZero said:
Hm... I wonder how he worked out exchange rates against the US dollar in 1500?

(And the graph doesn't say whether or not the money values are adjusted for inflation.)

centuries and centuries of pillaging
vici10

chound said:
Would it be safe to say that, Europeans colonised the world because of industrialisation. As only then they had to get raw materials for new industries and create artificial markets in the colonies by taxing local production? So now that they don't have those colonies how are they still able to support industries?

Modern European countries do not have colonies in the same sense as they had them from 16th century to 20th, but it does not mean their influence on their former colonies ceased or that exploitation of resources stopped. Due to new technologies, faster telecommunications,transportation and finance it is just done in different way. For introduction to the topic you can read articles about Neocolonialism. http://en.wikipedia.org/wiki/Neocolonialism

The other interesting fact is that land grab has not stopped . The recent facts of massive land grabs (that were picking in 2009) are targeting mostly countries of Africa (Sudan, Ethiopia,Mozambique, Tanzania, Madagascar, Zambia and DR Congo), South-East Asia (Philippines, Indonesia and Laos mostly). To lesser extend acquisitions happen also in Latin America and Eastern Europe(Ukraine and Russia mostly). The most targeted countries are the most poor countries with higher incidents of hunger. According to Economist, the land that was taken is at least 80m hectares. The real number is probably higher since most of deals are secret. From Economist:

It is also clear that the overall scope is vast: 80m hectares is more than the area of farmland of Britain, France, Germany and Italy combined. And land deals are continuing, possibly even speeding up. Over a tenth of the farmland of South Sudan has been leased this year—even before the country has formally got its independence. GRAIN, an advocacy group, says it has seen proposals that would allow Saudi business groups to take control of 70% of the rice-growing area of Senegal.
It is not just the size of land deals that remains uncertain. Their contractual basis often is, too. Few contracts have been made public, so details are sketchy. But an investigation of 12 that have been, by Lorenzo Cotula of the International Institute for Environment and Development, declares many “not to be fit for purpose”. The rights and obligations of each side, Mr Cotula says, are usually extremely vague, while traditional land-use rights are frequently ignored. As one farmer asked when a British company acquired forestry rights in Tanzania: “How come others are selling our land?

Most land that is taken, is high yield land, accessible, close to big cities. Most of this land was previously farmed by local smallhold farmers that were forced from their lands. This is so similar to enclosures in England and Ireland. The difference is that English and Irish peasants could go to newly open factories of manchester or move to America, For modern African farmers there is nowhere to go. These land grabs also do not contribute much to communities, there is not much evidence for job creation or transfer of technology. From Economist:

Most land deals contribute little or nothing to the public purse. Because markets for land are so ill-developed in Africa and governments so weak, rents are piffling: $2 per hectare per year in Ethiopia; $5 in Liberia. Tax and rent holidays are common. Indeed, it is not unusual for foreign investors to pay less tax than local smallholders. And upfront compensation to local farmers for use of their land is derisory: often just a few months of income for agreeing to a 100-year lease.

Now, who are the countries that are involved in land deals? They can be divided in two groups: so called emerging countries (China etc) and old boys club (US, Western Europe and Canada). Emerging countries except China are usually involved in land grab in their own regions. China, US, Western Europe and Canada are all over the globe. European countries gravitate to their former colonies. The biggest player is China, which is not surprising. China is currently in the process of industrialization. It would be foolish for Chinese to just rely on foreign companies for their industrialization, it is inherently position of weak, to be always behind and poorer than these foreign investors. Chinese seem to learn the lesson of history and try to imitate colonial expansion of Europeans, although in the modern form.

These land grabs are just one but rather striking example of exploitation of resources of weak former colonial countries by powerful countries. Returning back to the question, As one can see from examples above Western European countries still continue to exploit resources of their former colonies.

chound, of course, question that you ask is complicated one and has many different angles. For more comprehensive view you should probably look into global-systems approach, notably Immanuel Wallerstein . http://en.wikipedia.org/wiki/World-systems_theory
Last edited by a moderator: May 6, 2017
Ryan_m_b
Staff Emeritus
Science Advisor

I don't really think this is true, the first industrial revolution occurred due to a series of technological and logistical developments that led to the mechanisation of the UK textile and metal work industry as well as the widespread deployment of steam power. This trend continued with the mechanisation of most industries, construction of mass transport systems (e.g. canals) and widespread emphasis on entrepreneurs and innovators leading to more sophisticated technologies.

The graph fits the time of the industrial revolutions quite well, not sure about Britain's continuing rise before that but IIRC the East India Company was one of the largest ever and was created around 1600. That might have something to do with it.
Log in or register to reply now!

Related Threads on How does Europe still have a lot of money?

WANNA WORK IN THE USA (and make lots of money)
3

Does anyone still have their Christmas tree up?

How does it take a lot of skill to be a good plumber?
3

Not having children to save money
8

Having a lot of interests is not really good right?

Anyone still in school and have children?

What have you blown your money on?
2

Do you have money invested in the stock market?