How is charge transmitted between two metal plates separated by air?

My teacher marked my answers to this assignment as wrong. He wouldn't explain why, so I hope you guys will be kind enough to point me in the right way 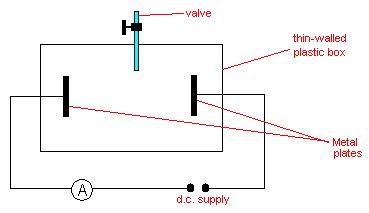 The reading of the sensitive ammeter was found to be 0.002mA. Radon-220 isotopes are introduced through the valve and it releases alpha particles.

1. What causes this initial current?
My answer: background radiation which has ionized air particles in the chamber.

2. Explain why the current increased and then fell quickly as the experiment proceeded, returning to the background count
My answer: the alpha particles were neutralized due to bombardments with air particles inside the chamber.

My question is, if they were neutralized then other particles were ionized. Shouldn't the current remain as high as before or were alpha particles absorbed into the metal plates?

3. What would be the difference on the current reading if a beta emitter were introduced instead of an alpha-emitter?

I think I can answer this one if someone could tell me how alpha particles and electrons carry charge through air between the two plates. I was also wondering how background count could remain constant at 0.002mA.

I understand that this is a big question, but any help would be really appreciated. Thank you!
Last edited: Nov 6, 2007

Ionizing radiation 'ionizes' the gas (air) molecules enabling them to conduct electricity, i.e. it breaks the insulating properties of air.

Thank you for explaining that part. Alpha particles are more ionizing, but if they ionize the air molecules and allow them to conduct electricity, why does the current fall back to the original value later and stay constant at 0.002mA? Isn't the number of ionized air particles greater?
Last edited: Nov 6, 2007
Share:
Share

Related Threads on How is charge transmitted between two metal plates separated by air?

Electric field of two plates separated by a spacial charge.