Is glow in the dark shirt radioactive?

You have seen shirts with figures or drawings that glow in the dark at night. Is it composed of radium ink?

Are there radium ink being used now or are all glow in the dark ink safe?

What do you think?


https://en.wikipedia.org/wiki/Radium#Hazards said:
Exposure to radium, internal or external, can cause cancer and other disorders, because radium and radon emit alpha and gamma rays upon their decay, which kill and mutate cells. At the time of the Manhattan Project in 1944, the "tolerance dose" for workers was set at 0.1 micrograms of ingested radium.

anorlunda said:
What do you think?

Radium watch dials were banned because they were dangerous.

You will not find radium in consumer products like clothes.
chirhone

anorlunda said:
Radium watch dials were banned because they were dangerous.

You will not find radium in consumer products like clothes.

But if radium waste is somehow cheaper than phosphurs. Radium ink can be illegally manufactured. My friend wears glow in the dark shirt when sleeping. He said the light doesn't vanish even the whole night. Perpetual glow can only happen if the ink has radioactive sources.
jim mcnamara
Mentor

Okay - you have answer - no. If you want to make up something for your own hard to understand reasons. Fine, please just do not do it on PF. Thread closed.
jedishrfu
Mentor
Insights Author

Radium is highly toxic. Madam Curie died from longtime exposure to radioactive elements while doing her fundamental research on their properties. 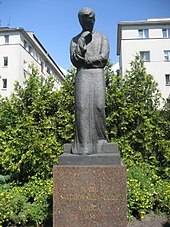 1935 statue, facing the Radium Institute, Warsaw
Curie visited Poland for the last time in early 1934.[16][72] A few months later, on 4 July 1934, she died at the Sancellemoz sanatorium in Passy, Haute-Savoie, from aplastic anaemia believed to have been contracted from her long-term exposure to radiation.[49][73]

The damaging effects of ionising radiation were not known at the time of her work, which had been carried out without the safety measures later developed.[72] She had carried test tubes containing radioactive isotopes in her pocket,[74] and she stored them in her desk drawer, remarking on the faint light that the substances gave off in the dark.[75] Curie was also exposed to X-rays from unshielded equipment while serving as a radiologist in field hospitals during the war.[58] Although her many decades of exposure to radiation caused chronic illnesses (including near-blindness due to cataracts) and ultimately her death, she never really acknowledged the health risks of radiation exposure.[76]

Companies in many parts of the world stopped using radium ink for clothing and radium painted clock dials because of the toxicity to the wearers and more so the workers.

However, I wouldn't be surprised if there are still some products manufactured today that use radium in third world countries because of lax health and safety laws. I couldn't find any hard references online though.
Share:
Share

Suggested for: Is glow in the dark shirt radioactive?

I Why does the effect linger with Glow in the dark?

I Glow in Dark

I Is dark matter all around us?

I What is the smallest possible state change in the Universe?

I Is the mass of a photon stationary in space?

I Is anything in the physical world infinite?
3

B Is radioactive decay truly random?

B What is our understanding of dark matter?

I The logical impossibility of proving that indeterminism is true?