At dinner, I spoke to Peter Higgs and said that I hope he wasn't offended by my statement - he wasn't. Then he said, "You're from Brookhaven, right. Make sure to tell Sid Kahana that he was right about the top quark 175 GeV and the Higgs boson 125 GeV".
--M.J.Tannenbaum, "Waiting for the W and the Higgs", arXiv:1608.06934

In 2009, Shaposhnikov and Wetterich successfully predicted the Higgs boson mass, by assuming that quantum gravity is asymptotically safe. Asymptotic safety remains a minority research program, but the paper itself is now well-known among people studying the metastability of the electroweak vacuum, with over 100 citations.

However, there was a paper which in 1993, predicted the Higgs mass and the top quark mass, and which remains almost unknown - though it was known to Peter Higgs himself, as the quote above reveals.

I'd say there are three relevant papers.

The 1991 paper (available as a KEK scanned document) introduces the model. The 1993 paper (published in 1995) makes the predictions. The 2011 paper revisits the predictions on the eve of the official Higgs discovery.

The model itself is based on the well-known NJL model of Nambu and Jona-Lasinio. The NJL model is an ancestor of the standard model's electroweak+Higgs sectors, and it's also an approximation to the low-energy scalar sector of QCD (i.e. pions and sigma meson), and it is still studied in many forms.

Kahana and Kahana modify it in an unusual way. The NJL model has emergent scalars and pseudoscalars. Kahana and Kahana add vector interactions in order to produce the electroweak gauge bosons as bound states.

They do a few other things that seem a little strange, too. But in the end they get the Higgs boson mass, the top quark mass, and even the weak mixing angle. And it's a renormalization group argument, as is that used by Shaposhnikov and Wetterich. There may even be some relationship.

This forum contains a number of fans of the prediction from asymptotic safety (I am one of them); I think we should also want to understand how this other, earlier, broader prediction works too.

The approximate top and Higgs mass were known from precision electroweak experiments, everything else is cherry-picking. Thomas Schucker maintained a list of Higgs mass predictions until 2011: 0708.3344. In the relevant range, there was about 1 prediction per GeV, with a typical uncertainty of several GeV this means many predictions had to be "right" just by chance.

Two more entries from the prediction list as example:

Feldstein, Hall & Watari 2006, "superstring inspired landscape of vacua and some probability density for the parameters of the Higgs potential"
Higgs mass 121 +- 6 GeV, and a postdiction of the top mass as 176 +- 2 GeV.


Shaposhnikov and Wetterich also made a prediction of 150 +- 24 GeV with a slightly different approach.
kodama

Well, that particular model with this exact set of assumptions is ruled out then.
kodama

mfb said:
Well, that particular model with this exact set of assumptions is ruled out then.

It is a weak piece of Bayesian evidence, but given the large number of predictions that doesn't say anything.
kodama

mfb said:
It is a weak piece of Bayesian evidence, but given the large number of predictions that doesn't say anything.

what about the naturalness problem in the higgs sector? the whole point of SUSY and MSSM is to explain why the higgs is so light when GUT or QG scale physics would result in a planck scale sized higgs mass.

do those models that predicted the correct higgs mass without SUSY, explain the naturalness problem? i.e does 2009, Shaposhnikov and Wetterich - quantum gravity is asymptotically safe show there's no naturalness problem
mitchell porter

I might agree about the top, not about the Higgs. More importantly, we now know that they are "near-critical", and the Kahana model apparently offers an explanation of this. It would be folly for theorists to refuse to understand it.
mfb
Mentor
Insights Author 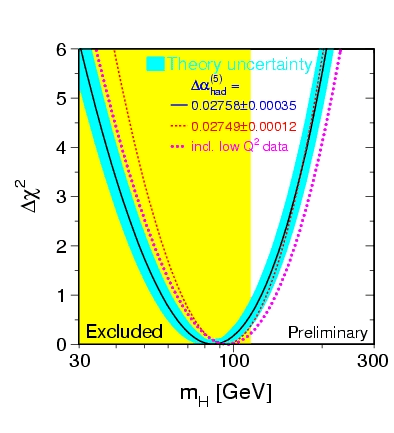 mitchell porter said:
I might agree about the top, not about the Higgs. More importantly, we now know that they are "near-critical", and the Kahana model apparently offers an explanation of this. It would be folly for theorists to refuse to understand it.

Very interesting paper! I actualy chuckled out loud reading the name of the last author :')

Their idea that near-criticality of physical constants (such as the Higgs mass and the cosmological constant) might be a way to explain specific numerics statistically without resorting to any talk about anthropic arguments or naturalness is as far as I can tell an actually legitimate argument in favor of some kind of multiverse; I myself would just call it a state space and avoid the need for invoking a multiverse altogether. In any case, I like that they both look at dimensional as well as dimensionless couplings and take the possible qualitative differences between these two forms of near-criticality seriously.

After reading the paper, I'm tempted to even take things one step further: assuming the validity of (near)criticality as a selection mechanism, is it possible to select the correct compactification of extra dimensions from the ##10^{500}## landscape using similar arguments? Has this already been tried? I kind of dislike string theory let alone reviewing its literature, but I'd honestly be surprised if this idea hasn't been tried already.
Log in or register to reply now!

Is the mass conferred by Higgs an 'effective' mass?