If you could elect any musician as president which would it be? I would chose Lemmy Kilmister.

I'd say Tim McIlrath, of Rise Against.

Oh, let me mention, he's a vegetarian (i think he might even be vegan) and has heterochromia (two different colored eyes=cool) as well as being a straight edge (no drugs, drinking, etc). Reason it'll never happen: A. Hes a musician not a politician and B. He's really liberal.

I'd have to pick Dan Fogelberg if he wasn't so dead. Maybe "the boss"...
Evo
Mentor

For the US, I'd choose Zack de la Rocha, that would be fun to watch!
For South Africa (my country of birth), Johnny Clegg
For Belgium, Trent Reznor, that would keep things interesting
SticksandStones

Mike Einziger [the guitarist from Incubus] would be a cool choice.
Topher925

Lemmy would rock actually, he actually seems to be a pretty average bloke off stage.
wolram
Gold Member

Lemmy would rock actually, he actually seems to be a pretty average bloke off stage.

I've never heard of this Lemmy fellow till today.
I don't know if I like his political leanings:


http://en.wikipedia.org/wiki/Lemmy" [Broken]
Lemmy collects Nazi memorabilia, and has an Iron Cross encrusted on his bass, which has led to accusations of Nazi tendencies. However, he considers himself an anarchist or libertarian, and that he is "anti-communism, fascism, any extreme," saying that "government causes more problems than it solves".

I don't really have a problem with his Nazi stuff. I've an original copy of Mein Kampf on my bookshelf, and about 1000 Nazi stamps in my collection. But a libertarian? I've never met a libertarian I agreed with on anything. And I mean anything.

One of her songs, http://www.youtube.com/watch?v=lTP0wUdLoEI", might indicate some of her social and political leanings.

Oh my. I've never read the http://www.lyricsfreak.com/j/joni+mitchell/the+three+great+stimulants_20075319.html" [Broken] before. It's "Artifice and Innocence". I always thought she was singing "Part of it's an innocence". I always wondered why my count was off on that song.

Hmmm... Reading all of the lyrics, it looks as though absolutely nothing has changed since 1985, when the song was written. hmmm..... Imagine that.
Last edited by a moderator: May 3, 2017
moe darklight

Well... the choice is obvious. Clearly, no musician has "ready for office" written all over him more than Cedric Bixler-Zavala: 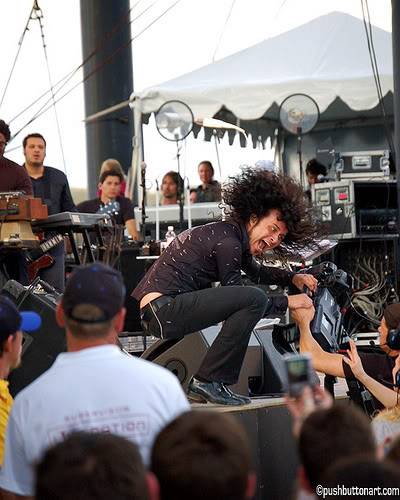 Mostly because I'd love to see him at press meetings, throwing mike-stands and monitors at reporters, yelling at them for "acting like a bunch of white people."
Last edited: Jan 23, 2009
hypatia

I chose Lemmy because he seems like a cool person and he would try and minimize the govt. He wouldn't want the govt. to keep expanding like current politicians do.
Log in or register to reply now!

Related Threads on Musician for President

Engineers tend to be musicians

Should musicians be shamed for liking pop music?

Musicians that went science route instead?

Are all great musicians good at physics?
2

What are your favorite bands/musicians?