One of the Earliest Animals

Multicellular animals (metazoans) are thought (based upon molecular divergence data between metazoanas and chanoflagellates) to have initially evolved about 720 MYA, at beginning of the Cryogenian (720-635 MYA). These first pre-metazoans are assumed to have started out very small with no hard parts (including no cell walls) and therefore did not preserve well as fossils.
During this period, the first components of the metazoan system of development (working from a single fertilized egg to a clone of cells that reproducibly shape themselves into a functional adult form, in order to reproduce) that generates the adult body plans were established.

Metazoans are thought to have separated from Chanoflagelates (eucayrotic single celled flagellated metazoan precursors) during the Cryogenian (720-635 MYA).
Near microscopic fossils, often interpreted as embryos, have been found at the beginning or the Ediacaran.
The Ediacaran Period (635-541 MYA) is characterized by the first macro scale fossils that were not thought to be bacterial mats. These fossils are of unusual morphology (strange looking), casting uncertainty on what exactly they are: plant, animal, fungus, colonial bacteria.
The Ediacaran was followed by the Cambrian period where the number and variety of obviously animal body plans increased rapidly. At this time, the body plans of many of the animals found today were established.

The identity and relationships of the Ediacaran fossils are still a matter of some discussion.
Now, additional strong evidence identifying one of the Ediacaran animals, Dickinsonia, as an animal, based on "fossil" cholesterol associated with an organic layer of the fossil animal. Cholesterol is only produced by animals, not plants, fungi, bacteria, or algae.

Dickinsonia is one of the most likely of the Ediacaran fossils to be an animal, based on apparent trace fossils (like footprints), showing its movement and feeding behavior (see areas in a bacterial mat that were fed upon below). The cholesterol findings provide additional strong support for this this being an animal.
Dickinsonia may be a fossil member of the obscure Placozoan phylum. Placozoa are among the most primitive of multicellular animals. They have been variously located either above or below Sponges, Cnidarians (hydra, coral, sea anemone), and Ctenophores (comb jellies).

Considering all that, Dickinsonia seems to be something like this to:
https://www.physicsforums.com/attachments/231018 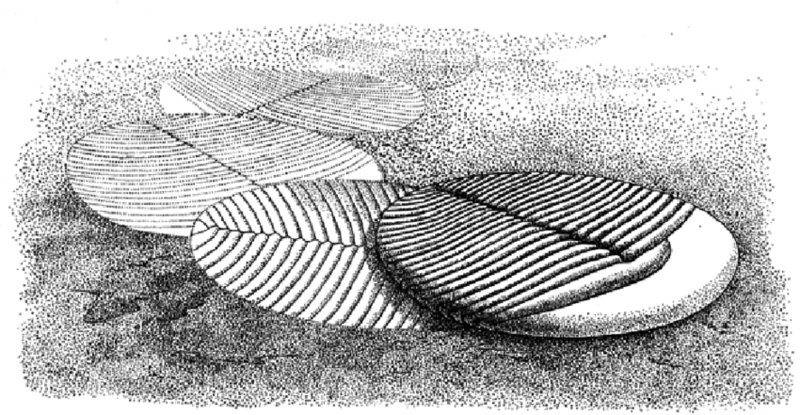 The same approach (chemical indicator of some group of organisms) used in the Dickinsonia case has now been used with sponges, but at much earlier (older) dates.
The Dickinsonia case was from about 635-541 MYA, in the Ediacaran.
The chemical indicative of spongeness, was found in rocks from 660-635 million years ago (Cryogenian, an world wide ice age time before the Ediacaran (first animal fossils)).

The popular versions (Here and here.) I have read were not clear, its not clear to me where exactly they got the samples from.
The actual publication in Nature is behind a paywall.
If it were from some specific fossil remains, like in the Dickinsonia case (which had negative controls), then the fossil and the chemical are pretty specifically tied together.

They were talking about widespread existence of sponges, but very small sponges that would not leave fossils well.
This indicates (to me) they detected the chemical but did not have obvious fossils.
In that case, this approach provides another line of evidence concerning earlier origins of the animal lineage than are indicated by the fossil record.
Molecular studies often place the divergence of the animal lineage separated from their choanoflagelate progenitors at similar Cryogenian times.
This is usually attributed to the fossil record's poor ability to preserve un-skeletonized animals combined with the assumption that the first multicellular animals.

Sponges are often considered the most primitive of the metazoans (animals).
They have no nerve cells, are completely immobile, and have a very simple body plan.
They are like a choanoflagellate (assumed ancestor) embedded in a simple structure (the rest of the sponge) to make better flow for its filter feeding activities.
Geologically they have the oldest fossils thought to be metazoan (animals).
An important cell in the sponge, the choanocyte, is very similar to the choanoflagelates that are considered to be the group that animals evolved from.
Share:
Share

Suggested for: One of the Earliest Animals

Billion-year-old fossil, a missing link in the evolution of animals?

First ancestor of Humans and Animals

How are parasites able to imitate other animals?

Can one shoot tip (in a plant) have more than one apical meristem?

Which one is the active ingredient for this cleaner?

Eyesight question -- Do any animals see in a spectrum other than visible light and infrared?