Hunters from the Alaskan coastal town of Wainwright first noticed the dark, shiny substance floating for miles in the icy Arctic waters of the Chukchi sea, according to reports in the Anchorage Daily News.

The odorous substance, which has been described variously as "gooey", "gunky" and "hairy" has been also been found of the coast of Barrow, 72 miles north east of Wainwright.

Samples of the huge "gobs of gunk" were taken on Friday by officials from the North Slope Borough, who flew out to Wainwright with the US Coast Guard to investigate. Jelly fish and a dead goose were found tangled up in strands of the substance.

The "goo", which is believed to be formed of organic matter, is reportedly floating in strands of up to 15-miles long.

The US Coast Guard told the Anchorage Daily News that the strange find is not an oil product or a hazardous substance of any kind.

"It's definitely, by the smell and make-up of it, some sort of naturally occurring organic or otherwise marine organism," said Petty Officer 1st Class Terry Hasenauer.

"In recent history I don't think we've seen anything like this," he added.
Gordon Brower of the North Slope Borough's planning department described what he had seen floating in the Arctic sea.

"From the air it looks brownish with some sheen, but when you get close and put it up on the ice and in the bucket, it's kind of blackish stuff and has hairy strands on it," he said.
The samples of the substance taken by the coast guard are being analysed in Anchorage, with results expected next week.

Anyone else heard about this yet? Are we under attack from some alien life form?

Any theories as to what could explain this?

Look, it's up in Alaska, so we should be safe. Just keep it away from open fires and hope it drifts north. Start loading up on shampoo
WiFO215

Damn! Sorry, that was just me. I had some REALLY bad beans the other day...
junglebeast

tchitt said:
Anyone else heard about this yet? Are we under attack from some alien life form? 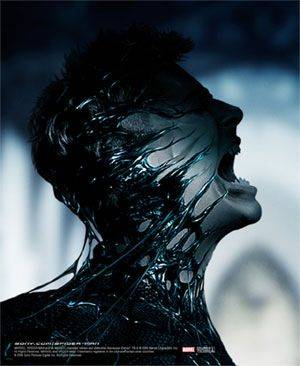 My first thought is that Sarah Palin flushed out her head.
elephunk

Danger said:
My first thought is that Sarah Palin flushed out her head.

Hehe, The mystery matter looks like Oil at a glance. Wonder what it is. I presume there must be a abundance of seaweed nearby?
Pythagorean
Gold Member

when powerful people are threatened by forgettable corpses, they often enlist the assistance of one of two people: the pig farmer... or the crabber.

I found the answer in a comment on this article here....
http://www.rantrave.com/Rant/Alaska-Blob-The-Goo-Mystery-Deepens.aspx

lanismydog said:
It's The Blob from that 1950's B-Movie. Remember at the end when they flew it up to the North Pole and dropped it in the frozen tundra? Well, global warming has begun and it is pissed off at us from freezing it for 50 years. As soon as it gets to shore it is going to be one gaint rolling ball of goo that will kill us all. RUN! Run as a fast as you can but know that it will find you!

The latest word is that the goo is algae.


The goo fast became an Alaska mystery. And the new findings still leave questions unanswered: Why is there so much of it in a region where people say they’ve never seen anything quite like it?


Local hunters and whalers didn’t know what to make of it. The Coast Guard labeled the substance biological, but knew little else. The stuff had hairy strands in it and was tangled with jellyfish, said a borough official.

It certainly looks black in a bucket

A
What is coast to coast?
2