Hello! I'm reading this part of the A-level physics book and finding a few places that I couldn't wrap my head around. They are underlined.

1) When saying oxygen, is it saying that oxygen is the most abundant element in the shoe atoms?

2)I am not too sure why the force per atom is shared between four electrons when there are eight in each oxygen atom. Despite the explanation it has given, I don't finding making sense and couldn't picture it.

Thank you for the help! 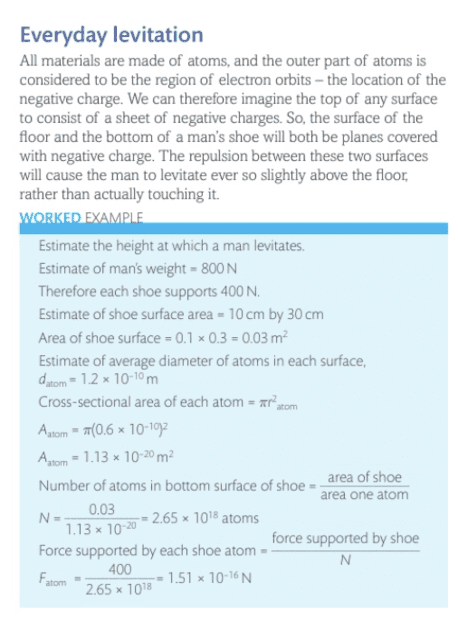 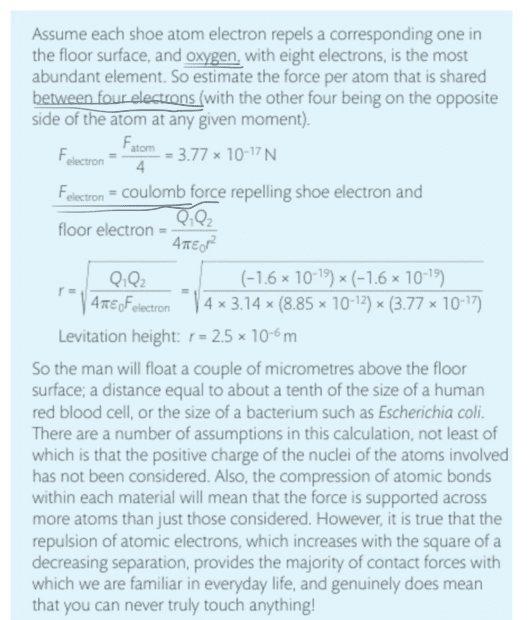 1. Both floor and shoe, I think. Even if this isn't true of the bulk materials, there is probably an oxide layer on the surface.
2. On average, at any given moment, four electrons will be on one side of the atom and four on the other. So there will be 4 "facing out" from the surface.
3. The electrostatic repulsion of the electrons (pushing the man up) balances the weight of the man (pulling him down).
Share:
Share

Suggested for: Problems regarding electrostatic forces in everyday levitation

I Electrostatic Influence and Series-Connected Capacitors

I Moving charges in electrostatics

Electrostatic Induction in Metals vs Insulators

B Static Point Charge Should Have Zero Effect

I Helmholtz's theorem and charge density

Does the electrostatic force create current in the circuit?