Real image of a sawtooth standing wave in a musical string?

The best way to see a standing wave is actually not with the stringed instruments, but in percussion section with the Chimes, which are bars of metal laid down and held at their nodal points, with the percussion point in the center and repercussion points at the ends. Chimes represent a single note standing wave by way of structure. It takes longer for the energy to dissipate from a chime than a guitar string so it has a longer sustain with no change of tone compared to guitar string which takes up tones and reverbs from the guitar and the other strings as well.

Is funny that I know this because swords work with the same standing wave form for proper construction, with percussion and repercussion points.
sophiecentaur
Science Advisor
Gold Member

Steelwolf said:
the Chimes, which are bars of metal laid down and held at their nodal points

pkc111 said:
Summary: Anyone got a video or animated gif of a standing sawtooth or square wave in a musical string?

Hi there
I am teaching resonance and standing waves in stringed instruments at the moment at high school.
The theory states that a number of standing waves simultaneously (harmonics) exist in a naturally vibrating musical string, but with varying amplitudes, the 1 st harmonic being loudest.
From my research on Fourier theory these standing waves should result in a standing sawtooth or square wave in say, a guitar string (lets assume plucked in the centre). I want to be able to show the students a real vibrating instrument wave slowed down so they can see clearly this composite wave...but alas.. so far no luck.
Any help would be appreciated.
Thanks

As you have already seen plucking or even drawing a bow across the string (which is in actuality vibrating up and down perpendicular to the string is not going to render the effect you are after.
Apparently, no one has actually tried to do this; or, if they have either they haven't been successful or they didn't film it if they succeeded.
In order to have a "standing wave" in a physical string, you must induce a constant tone linearly into that string with a constant amplitude. I know of no way to do this, other than possibly gluing the end of a string to the cone of a speaker, with a distance to the other end of that string firmly attached to a fixed point being exactly the distance of the wavelength of the tone which is being inducted into the string.
I would be willing to venture that the reason this hasn't been tried is that no one has been willing to chance demolishing their speaker. If you try this I would use a fairly low tone and very gradually/slowly move the fixed point of the string away from the speaker cone. At some point, the travel of the cone will start to pull heavily against the point where the string is attached to the cone and reek havoc. Also, the ability of any given string you may choose to accurately replicate a tone may be hindered by the material from which that string is composed.
Good luck.
sophiecentaur
Science Advisor
Gold Member

SWB123 said:
In order to have a "standing wave" in a physical string, you must induce a constant tone linearly into that string with a constant amplitude.

Under simple conditions you can have a decaying standing wave and a forced vibration can 'get it going'.
You can excite the string with several appropriate tones and produce a complicated looking standing pattern because all the waves are independent (ideally). But the exciter frequencies could not be at harmonics (why do I keep having to make this point?) but at the frequencies of the Overtones which correspond to the natural modes of the string. Effects at the ends will mean that there is Energy exchange between modes so the pattern would not stay there, once the exciter waveform is removed.

SWB123 said:
I would be willing to venture that the reason this hasn't been tried is that no one has been willing to chance demolishing their speaker.

That's a bit over dramatic. The Q of a string is not high and the coupling from the speaker would be low so what Energy build up could there be?
Swamp Thing
Insights Author

We can try to engineer the shape of the standing wave by working in the frequency domain:

sophiecentaur said:
You can excite the string with several appropriate tones

... but can we perhaps work in the time domain? Here is a hypothesis that one can try to prove or falsify:

If we apply a forcing function (e. g. triangle wave) to a single point on the string, we end up distorting the local shape / slope of the string and complicating matters hopelessly.

Instead, is it possible to apply a "soft" correction that will act gently over several cycles and bring the forced point's velocity (as a function of time) into a good match with the desired velocity function?

Here is how it could perhaps be attempted: 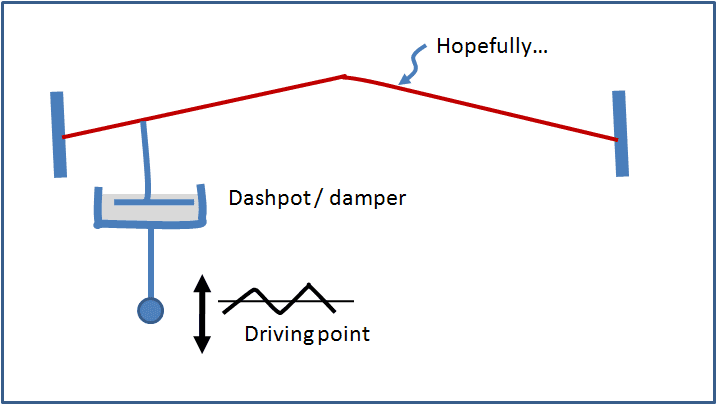 The damper conveys a force from the driving point to the string that is proportional to the error in velocity (not position) between the actual string behavior and the desired one. Over several cycles, the displacement waveform of the string at that point will be brought to match the driving function, as the error terms get slowly damped out. Once the error is brought to zero, the damper has minimal effect, serving only to correct any drift that may begin to appear.

If the answer is "no", then we may need to add one (or more) extra driving points and dashpots. So can we say that if we successfully impose a desired time function on at least N points, then the spatial shape of the standing wave will be as desired?

Edit : Perhaps "N" would depend on the harmonic up to which we want to get proper control. Or perhaps N would be 2 or 3, related to the order of the differential equation.
Last edited: Aug 27, 2019
Swamp Thing
Insights Author 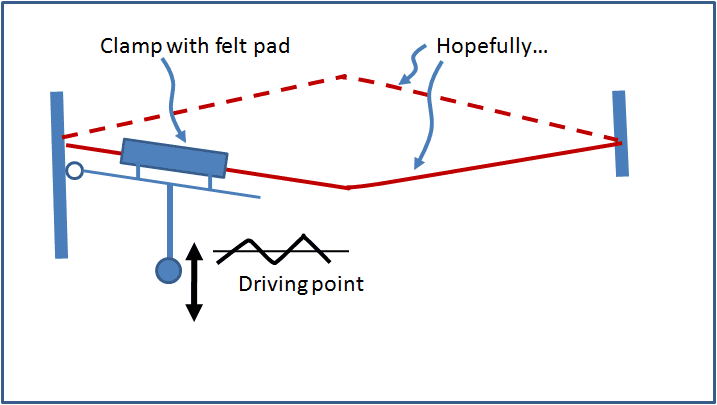 It would be pretty hard to make it light enough to be practically doable, but this could be at least a theroretical starting point.

An interesting point is that the triangle isn't an analytic function. But if we approximate it with a slightly rounded corner, then we could have an analytic function, which means that if we can control its shape in one region then we have it nailed everywhere.
sophiecentaur
Science Advisor
Gold Member

Swamp Thing said:
Instead, is it possible to apply a "soft" correction that will act gently over several cycles and bring the forced point's velocity (as a function of time) into a good match with the desired velocity function?

What we have here is a length of transmission line with 'imperfect' terminations at each end (string of finite cross section in a clamp) and a 'distributed' drive point. Using the electrical description - because it is familiar - the drive impedance will greatly affect the waveform on the string.
I started on a long winded description but erased it all. Suffice to say that you can force the string to be at a certain position at a certain time over a part of its length (you could force it to any shape you want by driving over its whole length). When the wave hits the other end, there will be dispersion and the reflected pulse would already be distorted. Ignoring this, the exciting waveform must be symmetrical about the middle of the string which means that it must only consist of odd modes. Exciting the string in the middle could achieve this as long as end effects are ignored (if overtones are near enough to harmonics).
Using a damped (mid-impedance) source will effectively broaden the resonances and that would allow a standing wave that 'resembles' the triangle wave (Not Sawtooth, which is not symmetrical about the centre point.)
The heavier this damping is, the more like your triangle wave but the lower amplitude.
This could go on and on - a high Q thread resonance .
Share:
Share

Suggested for: Real image of a sawtooth standing wave in a musical string?

I Clarification for a standing wave on a string equation

B Can we get a real image of virtual objects?

B Beats and standing waves

B Opposing speakers and standing waves

Is time real (in a physical sense)?

I Hydrodynamics - Wave of Translation

I Question about electromagnetics (waves and particles)

B Where will the image be formed?