Why is the chance of crossing over between two closely placed genes is considered low compared to those that are distantly placed on a chromosome?

'The frequency of recombinants produced by crossing over is the key to chromosome
mapping. Fungal tetrad analysis has shown that, for any two specific linked
genes, crossovers take place between them in some, but not all, meiocytes

(Figure 4-7). The farther apart the genes are, the more likely that a crossover will
take place and the higher the proportion of recombinant products will be.

Thus, the
proportion of recombinants is a clue to the distance separating two gene loci on a
chromosome map.'

-An introduction to genetic analysis by Griffith

The argument is not quite correct, because the probability of recombination is not uniform across the genome. For example, crossovers are infrequent near centromeres.

Now to the statement that 'probability of recombination does not depend' upon location. It's kinda true, if your initial data is number of crossovers and you imply independence of location, thus postulating that, say, in genome of 100 units 100 crossovers are observed with mean length of 1 unit. But it does not mean that on molecular level for single given recombination event there is no dependence upon distance. If you observe a chiasma at given location the probability of 2nd chiasmata depends upon distance from the first. Basically, make diffrence between population level (many cells) and molecular level (a single recombination event).


atyy said:
if a crossover can take place anywhere with equal probability, then considering any length of chromosome, the longer the length considered, the higher the chance of a crossover occuring within the length

This statement is false. If probability is equal the probability that given distance between two random points is observed is also equal, i.e. independent of distance. Consider interval from 0 to 1. Considere the uniform distribution of this interval. Choose two points. It is quite obvious that distribution of distances between these points is also uniform.
jim mcnamara
Mentor

Do you know what a Holliday junction is? I think that concept violates your point of view. It means that the two ends are swapped at one point. One crossover, one point, not two. 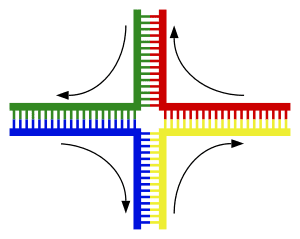 Thanks to everyone who contributed. Thread is now closed
You must log in or register to reply here.