Yelchin, 27, died in an unusual and horrifying incident early Sunday morning when his SUV—a Jeep Grand Cherokee—was left in neutral and apparently rolled down his driveway when he was outside of it, crushing him into a mailbox.

Sad, but according to the recall, the problem is with the drivers not paying attention, not placing the car in park, and then also disregarding the warning sound when they open the driver's door, it's not a problem with the car malfunctioning. Personally, I would hate a shifter like that.

So young, what a tragedy.
nsaspook
Science Advisor

Evo said:
Personally, I would hate a shifter like that.

So young, what a tragedy.

I think most people did causing them to go back to a traditional position shifter in 2016. Yes, a tragedy and a unintended consequence of change.

Ironically, it reminds me of the scene from the first reboot where Sulu forgets to disengage the "parking brake". Better to be embarrassed that to have your vehicle move on its own. 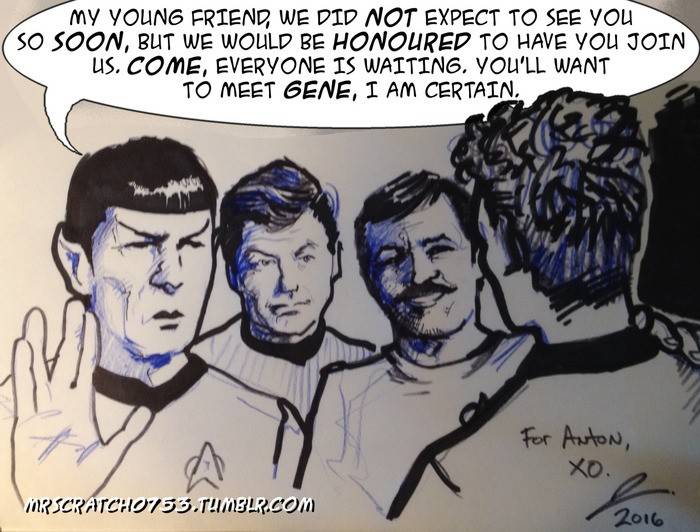 Evo said:
Personally, I would hate a shifter like that.

I can imagine that it takes some getting used to. It's like when I had to learn how to drive a scissor lift. It used a joy stick. Push forward to go forward, pull back to go rearwards, push left or right to turn the wheels. However, returning the stick to center did not straighten out the wheels. Push left and the wheels turned left, return to center and the wheels stayed turned left. To straighten the wheels back out, you would have to push right on the stick until the wheels faced straight and then return the stick to center again. Steering it was a series of nudging the stick left and right. (It didn't help that you couldn't even see the wheels unless you leaned over the rail and looked straight down, but if you did that all the time you weren't looking at where you were driving.) You got used to it after a while, but it did take practice.
Share:
Share

M
What is your favorite Star Trek series
3