Additional explaining of my definition of "A is closest to B"

What my program does, is that for each point A (1 point is considered to be an island) it calculates the distance to all the other points. It checks which distance is shortest, and the island that has the shortest distance to A is what I consider "the island closest to A". 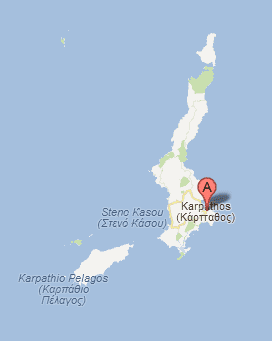 Map showing Karpathos and nearby islands (from Google Maps)

Of course, the way islands are placed in the real world is not random; it depends on the way continental plates are shaped etc. As I got home from my vacation however, I continued to think about the problem of finding the probability that islands are island best friends. I have some experience with a program called Maple, so I decided to use maple to find out about the probability that islands are best friends. I have now created a “program” in Maple that calculates this probability for randomly distributed islands on a rectangular map (grid), which easily allows the user to set the number of islands to place, the grid size and the number of simulations the program will run. Below is a sample of a map created by this program. 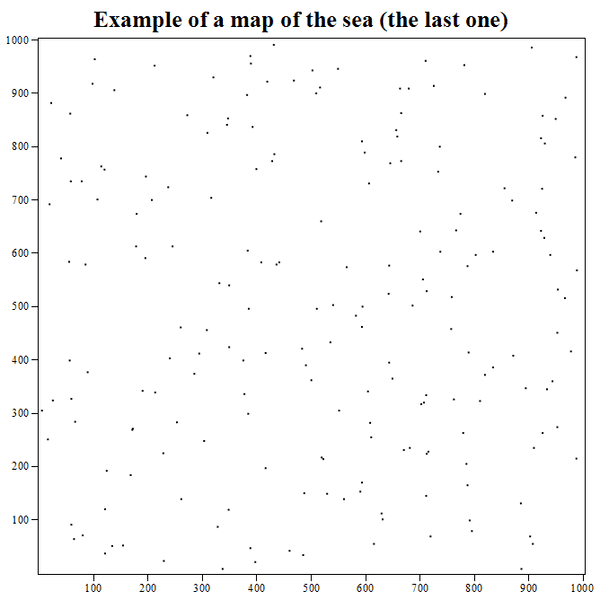 In the case of 200 point-sized islands randomly placed on a 1000x1000 grid, “the most probable probability” is that around 62-64 percent of the islands have an island best friend. Now, one might wonder how this changes when the map size is changed or the number of islands is changed. Here is one example with the same map size as before, 1000x1000, but with a 100 islands instead of 200. Shown is the result of 1000 simulations.

The peaks are at about the same place, but this histogram is a little bit wider than the one with 200 islands.
You might also wonder what the probability distribution looks like if we move from 2 dimensions to 3 dimensions, and instead randomly place point-sized stars in a cube or cuboid. I modified my program to allow me to do these calculations, i.e. to calculate the percentage of “star best friends”. Below is an example of one simulation of 200 randomly placed stars in a “space map” of size 100x100x100. 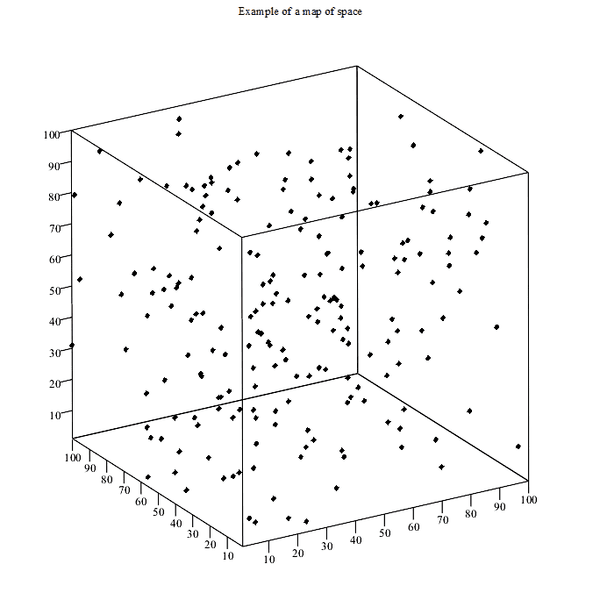 I have so far not yet have time to do a lot of calculations on the probabilities in space. Below is a distribution that shows the probability that stars will have a best friend, based on a space map of size 100x100x100, 200 stars and 1000 simulations.

It’s pretty similar to the one made from 10000 simulations, 1000x1000 map with 200 islands showed earlier, except that the histogram has moved a little bit to the left. Also noteworthy is that these two configurations have the same number of possible positions for the stars/islands, namely 1 million.

Questions i have
• Is this the right forum to post this thread? Do you have any tips on websites where I might post this and get some kind of response/input/ideas from other people?
• Do you know if anyone has studied this problem before?
• Is the probability distribution shown in my histograms a normal distribution?

What’s left for other people to do?
• 4 dimensions and higher.
• Further studying of different map sizes and number of islands.
• More efficient algorithms for faster calculations.
• Maps that aren’t rectangular or cuboidal, for example circular and spherical.
• Actual statistics of real-world islands.

First of all, thank you for reading through it (I know the story about Karpathos etc. is irrelevant; I wanted to give some background to why I was doing these calculations).

Thank you for pointing out that I didn't define" A is closest to B", I will try to do it in this reply and then put the explanation in the original post as well:

What my program does, is that for each point A (1 point is considered to be an island) it calculates the distance to all the other points. It checks which distance is shortest, and the island that has the shortest distance to A is what I consider "the island closest to A".

As to treating the islands as points, it's how I do because I figured that would be easiest. My program is perhaps not a calculation of how the probability for real islands is; rather, I call the points "islands" because that's how I started thinking about this problem. The calculations might be more correct in 3D when I consider the points to be stars, since on a cosmological scale I would guess that stars can be treated as points when calculating the distance to other stars.
Share:
Share

Suggested for: True proximity in plane and space (Island and star best friends)

B Vacuously true statements and why false implies truth

I Probability of ending up with Rhode island

MHB How can we find probability space and events

A Probability and entropy in an exponentially increasing sample space

B Why "the conditional in which the antecedent is false" is always true?

B How best to statistically analyse a PMT signal?

A 2D space and 1D time evolution of a random field

I Cardinality of Theorems vs True Sentences in a Theory