What does 'dv and dx' mean in f = eta A (dv/dx) in coefficient of viscosity?

2. Homework Equations
What does 'dv and dx' mean in f = eta A (dv/dx) in coefficient of viscosity?

As I know v = velocity and x = distance. then what does 'dv' and 'dx' express here. Kindly explain.

Like any derivative, it means the rate at which v varies with respect to x. Imagine running at top speed on asphalt and then you hit a muddy field that gets muddier the farther in you get. Even though you are pumping your muscles as hard as you can, the deeper you get, the lower your speed. The rate at which your speed decreases with distance is dv/dx, in this example a negative number.
Buzz Bloom
Gold Member

I am not sure I understand what is puzzling you. I will tell you what it means to me, and I hope that will be helpful.

dv/dx is the rate of change of velocity as position changes.

You can also write dv/dx = dv/dt / dx/dt.
Do you understand that? Since dx/dt = v, and dv/dt = a (acceleration) you can say that the meaning of dv/dt is the value you get when you divide the acceleration by the velocity.

I hope this helps.

Here's what Wikipedia has to say about it: https://de.wikipedia.org/wiki/Viskosität (They used ##y## instead of ##x##.) 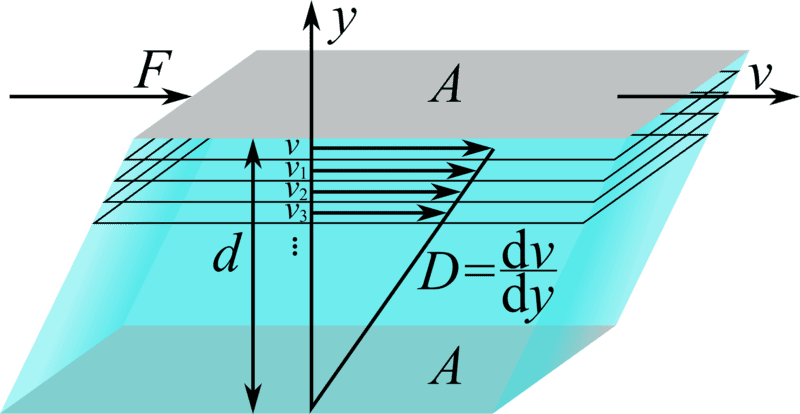 Maybe the OP is not familiar with derivatives or the Liebniz formalism for derivatives https://en.wikipedia.org/wiki/Leibniz's_notation.
Chestermiller
Mentor
Insights Author

I agree with @fresh_42 . This equation is typically used to introduce Newton's law of viscosity, based on the most simple example. In this example, you have a fluid contained between 2 large parallel plates, with the lower plate (y=0) stationary and the upper plate y=h) moving at velocity V in the positive x-direction. The fluid x-velocity in the region between the plates is linear, and given by:$$v_x=V\frac{y}{h}$$. The force in the positive x-direction required to cause the fluid to shear with this velocity profile is given by Newton's law of viscosity as:
$$F=\eta A\frac{dv_x}{dy}=\eta A\frac{V}{h}$$where ##\eta## is the fluid viscosity and A is the plate area. The derivative of the x-velocity with respect to y is referred to as the "shear rate."

The example given by Buzz Bloom, rather than involving shear of the fluid, is referred to as an elongational deformation. In this case, dv/dx is called the "rate of elongation", and the tensile force involves 3 times the viscosity.
nickthelegend

Does a = v dv/dx hold when moving in a plane?

What's is dv for a finite cylinder?