Why does hybridization occur?

2) Does it occur only when a chemical change is underway and a bond is being formed?

3) Does it occur in all atoms?

Covalent Bonding occurs between non-metal elements at the valence level when the electrons are unpaired (paramagnetic) and tend to pair with another electron from a substrate element creating a diamagnetic pair. Using your example (methane, CH4) the valence level electrons must undergo hybridization (change) in order to become paramagnetic and accommodate pairing of electrons forming a covalent bond. Consider the electron configuration of carbon before hybridization (ground state configuration) C:[He]2s22px12py12pz0. This configuration has the 2s orbital full with paired electrons at one energy level (which can NOT accept additional electrons for bonding) and two 2p orbitals at another energy level with paramagnetic electrons. The geometry of the ground state orbitals would not accommodate addition of 4 Hydrogen atoms.

In graphic form, figure 1 below shows relative energy levels of the ground state orbitals in relation to hybridized orbitals. In order for 4 substrate Hydrogen atoms to each share their unpaired (paramagnetic) electrons with the valence electrons of carbon, the valence configuration of carbon must undergo hybridization, or change into 4 equal energy orbitals each having a paramagnetic unpaired electron. Think of this as putting fruit into a blender and allowing it to become homogeneous and then pouring the blend into 4 containers holding equal amounts of mix. The 2s and 2p orbitals 'blend' and become 4 equal energy sp3 hybrid orbitals, each having a paramagnetic electron, each having equivalent shapes ( asymmetric figure eight ) and all connecting at the crossing apex of the fig-8 & arranging themselves in a tetrahedral geometry (figure 2) ready to accommodate 4 substrate Hydrogen atoms each also with a paramagnetic electron. When the sp3 hybrid orbital bonds with the 1s orbital of Hydrogen, a Sigma Bond (σ-Bond) characterized by a line of symmetry through the nuclei of the bonding elements is generated.

Hope this helps a bit. I've made other comments/posts about hybridization in other compounds back in January 2016.
Dr Uma Sharma
Gold Member

We have different theories to explain how elements reacting to form molecules ..means about chemical bonding ...
very first is based on octet rule ....second is based on VSEPR ...which helps in understanding many things about shapes, angles etc.
more sophisticated theories are
Valence bond approach based on hybridization
Molecular orbital approach based on linear combination of atomic orbitals (bonding and anti bonding orbitals)

Thank you both for the excellent replies. All my questions are answered.
DrDu
Science Advisor

Maybe the most important point to realize is that hybridization is nothing that "happens" but is your own and private choice of a model.
E.g. the bonding in molecules like water or ammonia can be described - using valence bond theory - both with hybridized and with unhybridized atomic orbitals.
The numerical results like bond energy and molecular geometry are almost identical. In the same way, the bonding in ethene can be desribed equally well using sp2 or sp3 hybrids on carbon. The latter description leads to so called "banana" bonds between the carbon atoms.
Last edited: Sep 16, 2016
James Pelezo
Gold Member

DrDu said:
Maybe the most important point to realize is that hybridization is nothing that "happens" but is your own and private choice of a model.
E.g. the bonding in molecules like water or ammonia can be described - using valence bond theory - both with hybridized and with unhybridized atomic orbitals.
The numerical results like bond energy and molecular geometry are almost identical. In the same way, the bonding in ethene can be desribed equally well using sp2 or sp3 hybrids on carbon. The latter description leads to so called "banana" bonds between the carbon atoms.

In the ground state of O and N, the s orbital is filled and the p orbitals contain one electron whence they can form two or three bonds, respectively. The resulting structure is that of a bent H2O or pyramidal NH3. There is no fundamental principle in quantum chemistry which forces the atomic orbitals to align completely, so deviations of the angles are to be expected. In the case of H2O, the observed angle is between a right angle and a tetrahedral angle, so both s+p3 and sp3 are reasonable. Anyhow a carefull optimization of the hybrid orbitals will lead to the conclusion that the lone pairs have more s character and the bonding orbitals more p character than in sp3 hybrids. In any case both unhybridized and hybridized atomic orbitals form an excellent starting point to describe bonding in these molecules.
DrDu
Science Advisor

James Pelezo said:
Covalent Bonding occurs between non-metal elements at the valence level when the electrons are unpaired (paramagnetic) and tend to pair with another electron from a substrate element creating a diamagnetic pair. .

All very good questions that do need further consideration. Keeping in mind that the prevailing theories on atomic & molecular structures evolved from the need to explain molecular geometries that have been confirmed both theoretically and experimentally. There are many citations treating the subject. In this, the majority of the conclusions are based upon theories that propose transitions of orthogonal systems into configurations that support more energetically favorable geometries when bonding occurs. This is also the more supported postulate promoted in all college level general chemistry texts that I have reviewed over the years. I would welcome citations that support orthogonal bonding, but I have found (outside of this debate) no citations that support ground state bonding without a configuration change to both accommodate attaching substrates & achieve more energetically favorable geometries. Here's an excellent citation on bonding published by Boise State University, Dept of Chemistry. It's is very well written and easy to follow. All the best to my learned colleagues. Have a great day. https://chemistry.boisestate.edu/ri...g and hybridization/bonding_hybridization.htm
DrDu
Science Advisor

What do you mean with orthogonal bonding?
James Pelezo
Gold Member 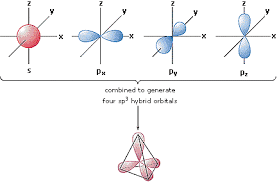 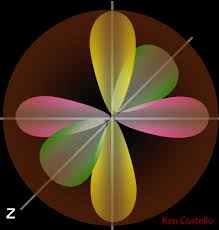 Don't get me wrong. I don't want to deny the importance of hybridization in general. But after having been taught this stuff as it is usually presented in high school and introductory chemistry classes, my theoretical chemistry teachers in university had a hard time to convince us that many of these concepts had been disproven or in need of modification based on the results of ab initio calculations. Most of the curriculum in general chemistry dates back to Linus Pauling. His books are an absolutely marvellous piece of pedagogics, but have been written before the advent of computers which were powerful enough to test most of his hypothesis. When comparing Paulings books with modern treatments you will certainly note that he formulated most of his theses much more cautiously. One point which has been disproven is the participation of d orbitals in main group compound bonding hybrids, which is e.g. still to be found on the Boise state univeristy link you provided.
During my thesis in theoretical chemisty I was performing VB calculations myself and did talk to those people who had developed powerful valence bond computer programs. Although these people had written numerous articles, also with a more pedagogical aim, where they scrutinized Paulings concepts, these have been widely ignored by the authors of introductory text booksj, cf.
http://nigc.ir/portal/Images/Images...mechanics/Valence Bond Methods.G A Gallup.pdf
https://books.google.de/books?id=ic...A141#v=onepage&q=Hilberty valence bond&f=true
http://samples.sainsburysebooks.co.uk/9780470192580_sample_390223.pdf [Broken]

In these numeric treatments, the classical hybrids defined by Pauling play hardly a role, anymore.
On the other hand, I think that the emphasis on hybridization in introductory texts misses the real philosophy behind VB theory, namely that the bonding in molecules can be described by forming a relatively simple wavefunction build up from the atomic states of the free atoms. Hence bonding represents but a small perturbation of the states of the free atoms. The optimization of the atomic orbitals, e.g. by hybridization, to even better suit the formation of bonds is only the second step.
The optimal degree of hybridization depends on many factors, e.g. the s - p energetic separation in the free atom and the relative size of the orbitals.
The s-p energy difference increases from carbon to fluorine with the effect that the optimal hybridization of the bond orbitals decreases from sp3 to almost pure p in the rowh CH, NH, OH to FH. On the other hand, s and p orbitals are of vastly different size in higher main group elements like Si, P, or S.
Last edited by a moderator: May 8, 2017
James Pelezo
Gold Member

Your points are all well taken. The theories will always be in a bit of evolution based upon newly discovered relationships, as one should expect. Unfortunately, new variations in quantum concepts based upon novel insights have been traditionally slow to develop and/or change, usually due to complexity of the applied mathematics. Never the less, the postulates related are on sound technical foundations and should be promoted. An excellent publication for support of this is the Slater paper on Simplification of the Hartree-Fock method of solving the Schrodinger equation. http://journals.aps.org/pr/abstract/10.1103/PhysRev.81.385. With that being said, the main stream thought (in my humble opinion) will - as it always has - follow the safest path of least resistance and promote (in the minds of many) the more simplistic approach. I myself follow the more traditional hybridization theories in the Pauling context simply because it follows a more seamless continuity when transitioning from atomic structure to molecular structure theory in my current presentations to my students. In my mind the bonding of non-hybridized orthogonal atomic systems doesn't have the justifiable continuity in relating the transitions from atomic ground state to molecular bonded states. Partly because of my limited ability and partly because I am simply more comfortable with the traditional. I am continuing to review the concepts, but as yet do not feel comfortable with incorporation into my presentation. I hope the concepts will be modified to reveal new and more useful allegories that uncover atomic and molecular behavior and still remain easy to understand, present and promote to the young scientist coming our way. This is a great time of wonderful discovery that will overturn many long held concepts in favor of new descriptions of nature, and I think the orthogonal conversions will be one. I look forward to future explanations of bonding models that will help me better understand the concepts in a more understandable context. All the best to my learned colleagues.
Log in or register to reply now!

Related Threads on Why does hybridization occur?

Why does vibrational relaxation occur.

Does hybridisation only occur with Carbon?

Why does roofing occur despite the difference in chemical shift?

When does dissolving occur?

Why is the N in pyrrolidine sp2 hybridized?

Why do double displacement reaction occur?

How does corrosion occur at the least oxygenated areas?

Why do reversible reactions occur in the first place?

Determining hybridization in a compound