Why do red dwarf stars do not emit white light like the Sun?

Does an incandescent bulb emit white light? If so, so do red dwarfs.
stefan r
Science Advisor 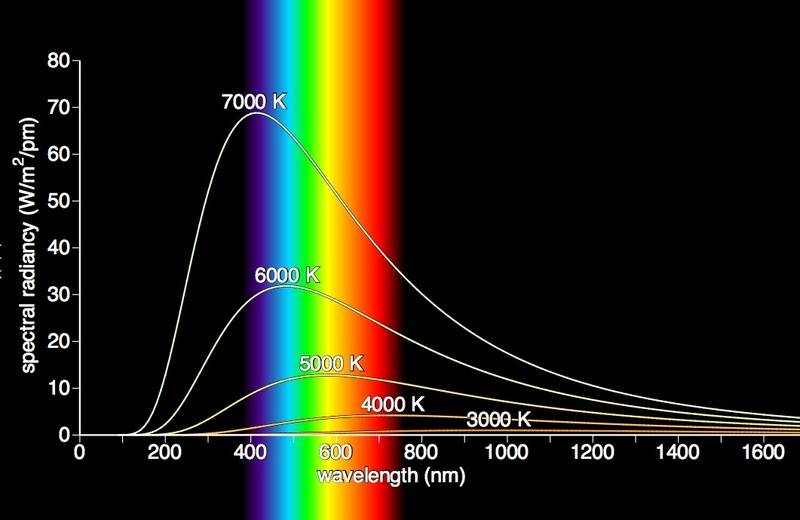 When you see colors you are often just seeing more of a color. It looks blue because there is more blue light stimulating the receptor in your eye.

When you use an electric stove the iron gets hot enough to be red. When welding it is hot enough to be blue and it contains a lot of UV. Do not look at anyone welding because it will burn your eye. You can see the flash reflected off of a wall or in the smoke rising away from a weld.

Let's consider main sequence stars, for simplicity. There are two concepts in astrophysics which together completely answer your question:
1) Mass-Luminosity relation (more massive stars are brighter)
2) Relationship between effective temperature (or spectral class or "color" of the star) and the luminosity of the star, known as HR diagram. In short, this relation is showing that stars with higher effective surface temperature are brighter.

Combining both concepts together, it is obvious that, that more massive stars have higher effective temperature, i.e. color closer to the blue part of spectrum. Less massive stars are closer to the red end of spectrum. The effective temperature itself indicate what is the wavelength where most of the intensity is radiated away by a star (following the Wien's law for blackbody radiation).
stefan r
Science Advisor

lomidrevo said:
...it is obvious that, that more massive stars have higher effective temperature, i.e. color closer to the blue part of spectrum...

How is that "obvious"? Certainly if you heat things up to various temperatures and accurately measure the temperature you consistently get that result. How would a philosopher with no lab apparatus come to that conclusion or convince anyone that it was the case? Wilhelm Wein did make that argument. I did not see the argument in your post.

Arcturus is the brightest star in the sky where I live. Wikipedia says it has mass 1.08 solar. Theta Orionis 1 has 33 solar mass. The entire Orion nebula (Orion's sword or dangling member) is much dimmer than Arcturus.
I realize that you said "main sequence" and neither a nebula nor Arcturus are "main sequence" but your post does not explain what the main sequence is. When I select sequential numbers out of a randomly generated list of numbers all of my selections are sequential (tautology). That is not a useful explanation of anything. Ptolemy, Galileo, Haley, Isaac Newton, and Wilhelm Wein would have no idea what you were talking about.

Sirius is the brightest star people can see (I cannot see it but I trust some people from down south edited wikipedia correctly). Sirius has 2.06 solar mass. Gamma Ursaes majoris is the bottom corner of the big dipper. Gamma Ursaes Majoris has 2.94 solar mass and is very nearly the same color as Sirius. Gamma Ursaes Majoris is dimmer than Sirius. I realize that distance is a factor but that was not included in your post. You could spend an entire lifetime staring at the sky from mountains with perfect seeing. You would never be able to do the parallax measurements that are needed to determine that Sirius is close to us. Denneb (the swan's head) looks like it should be in the same category.
absolute magnitude,vs apparent magnitude.
lomidrevo

@stefan r , do you think that your post mixing whole bunch of unrelated topics is more instructive? (I am not going to react to any of them, because we would get out of the topic). Of course I didn't mention all aspects, limitations and approximations in my single post, that is not possible. Moreover, the thread is labeled as "Intermediate", so I suppose that OP has already some knowledge, and I don't have explain what is main sequence star. If OP will be interested, the conversation will surely evolve and we might dig into details.To begin with main-sequence stars only, it is easier to understand, because you don't have take the stellar evolution into account.
I am not saying that any of the two concepts I mentioned is obvious itself. It took enormous amount of effort while astronomers were able to properly understand the details during last century, but finally the understanding is very well supported by both: observations and theoretical models of stellar evolution. When you already know the concepts it is not so difficult to combine them and to get the "mass-color" relation, which was asked by the OP.
Chronos
Science Advisor
Gold Member

White ls not a color, it is merely a roughly equal mix of all the colors for which the human eye has receptors. 'White', only means the brain cannot perceive a dominant component of the wavelengths being received. The eye only has receptors for three basic colors - red, green and blue and the brain combines these into a mosaic, producing what we commonly refer to as 'color' perception. A brain that evolved on a planet with a red star may compensate for the overload and interpret direct sunlight on its world as 'white' light and perceive our sunlight as decidedly bluer that its own.
.
stefan r
Science Advisor

lomidrevo said:
@stefan r , do you think that your post mixing whole bunch of unrelated topics is more instructive? ...

lomidrevo said:
...Of course I didn't mention all aspects, limitations and approximations in my single post, that is not possible. ...

I was hoping for an synopsis of Wein's argument. The reference in wikipedia. is Mehra, J.; Rechenberg, H. (1982). The Historical Development of Quantum Theory. I do not have that book. I could order it on inter-library loan or buy it but I am not going to do either. Do not feel obligated to do anything on my account. It is an open question for anyone who knows of an easy link or feels like responding.


lomidrevo said:
...Moreover, the thread is labeled as "Intermediate", so I suppose that OP has already some knowledge, and I don't have explain what is main sequence star. ....
I am not saying that any of the two concepts I mentioned is obvious itself. ... asked by the OP.

Someone labeled his one and only post on physics forums as intermediate. Astronomy 101 is not required for graduation from university. I would assume that a question in an astronomy forum is intermediate only if it is more advanced than the topics covered in introduction to topic class. I remember Wein's approximation coming up in physical chemistry. Black body radiation was also covered in analytic chem and physics 101. The wording of the original post should be labeled beginner but we can still ask the intermediate question.


lomidrevo said:
To begin with main-sequence stars only, it is easier to understand, because you don't have take the stellar evolution into account. .

stefan r said:
The wording of the original post should be labeled beginner but we can still ask the intermediate question.

I agree, some additional inputs from OP would be required to know what is his current knowledge in the field, and maybe to clarify his question:

James2018 said:
How is the blackbody radiation spectrum altered by the star mass?

I understood that his main concern is the relation between the stellar mass and the peak wavelength of the spectrum (the most represented "color" in the star's spectrum), but maybe I am wrong. I ignored the effects caused by perception of light by human eye (and brain), but maybe this is the main concern of OP. Let's see whether we get some feedback, it happens quite often that OP loses his/her interest after posting the first question...

Yes, it does, as far as we still talk about the "mass-color" relation. As you pointed out, red dwarf and red giant might have the same effective temperature (i.e. "color") but their masses are different in general, so you cannot define 1:1 relation for all kind of stars. The 1:1 relation can be done per single luminosity class, e.g. for main sequence stars (or more strictly for Zero Age Main Sequence stars). As the stars evolves it is getting further away from the main diagonal on the HR diagram. So getting back to example with red dwarf and red giant, the two stars are in different evolution stages, and part of different MK luminosity classes. The mass-temperature relation won't work. Fortunately, the luminosity classes can be distinguished due to effect of spectral line broadening.
rootone

Chronos said:
White ls not a color, it is merely a roughly equal mix of all the colors for which the human eye has receptors ...
.

... and there are other animals, ( and plants for that matter), which have evolved to respond in wavelength outside of those considered as visible by humans.
https://blogs.scientificamerican.com/guest-blog/well-ill-bee-bees-see-uv/
Share:
Share

Suggested for: Why don't red dwarf stars emit white light like the Sun?

I Are White Dwarfs Stars?

I Why don't any stars "look" red? red shift

B Process of a sun changing into a white dwarf