Hi, I wanted to refresh some knowledge, some years ago @berkeman helped me out with this , thanks.

My self used argument for this was imagining a tennis ball bouncing between two walls (walls represents amplitude width/height) given the ball always moves with the same speed, then widening the walls would mean a lower hit rate per wall per given time (more time spent flying towards and from the wall) while putting the walls closer would mean an increased hit rate per given time per wall.


Now if this all is so far so good then I have one more question, is it true that for any real non constant waveform/signal the AM sidebands are never equal or exactly matching in time and only appear mirror shapes of one another if taken over a longer period if time and then put together?
Much like the carrier frequency always has the highest peak compared to the side bands but that is also if time averaged not in any specific moment?
On a AM modulated sine the carrier frequency would be the one located exactly half way between zero crossing and peak?

artis said:
AM sidebands are never equal or exactly matching in time and only appear mirror shapes of one another if taken over a longer period if time and then put together?

I am assuming that you have already read around this topic and that you can find all the relevant equations and diagrams. You need to be careful to avoid your 'own' interpretations of what you may have read because that can lead you astray.

To define the frequency(ies) of any signal (e.g. the 'sidebands') implies a long (infinite - ish observation / measurement) time. But the sidebands of an AM signal are symmetrical about the carrier frequency and the spectrum is identical to that of the modulating signal. This assumes perfect AM of course. All the information about the modulating signal is contained in just one set of sidebands. Both the carrier and the other sidebands can be done away with and Single Sideband transmission can work fine. The only problem is that the receiver is much much more complicated because it has to regenerate its own carrier of exactly the right frequency or you get distortion (Donald Duck sounds). AM transmission allows for a very simple (cat's whisker) style receiver but it is a very wasteful form of modulation.
Baluncore
Science Advisor

artis said:
On a AM modulated sine the carrier frequency would be the one located exactly half way between zero crossing and peak?

The spectrum lies in the frequency domain and represents the signal over a period of time. You need to remove single points in time and instant spectra from your analysis or model.

For AM, any change in amplitude of a pure sinewave during a period of spectral analysis must result in energy leakage from the single carrier frequency into other frequencies close to the carrier.

For FM, any change in the carrier frequency must move energy into nearby frequencies.
sophiecentaur
Science Advisor
Gold Member
2020 Award

Baluncore said:
For AM, any change in amplitude of a pure sinewave during a period of spectral analysis must result in energy leakage from the single carrier frequency into other frequencies close to the carrier.

Your idea of "leakage" makes assumptions about the method whereby AM is achieved. You can use the familiar phasor notation to describe the process: 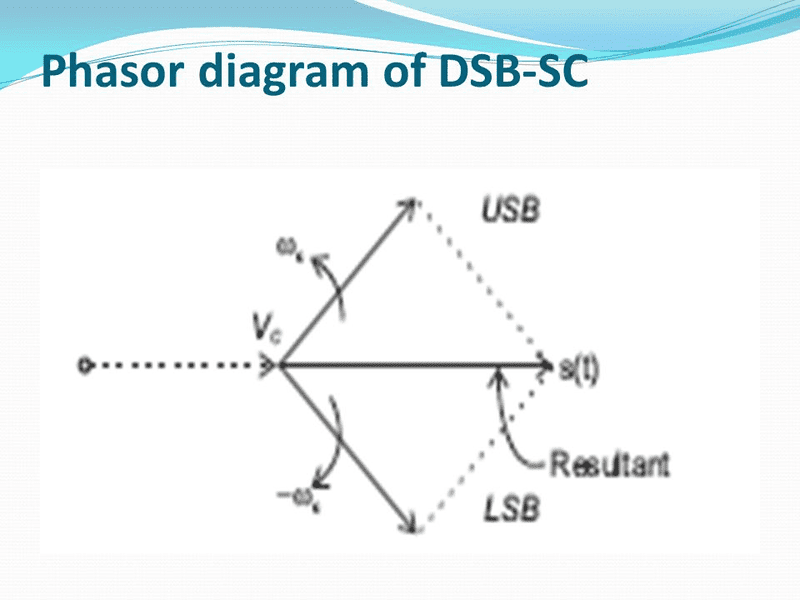 The diagram shows a Carrier phasor (Vc) and two added sidebands (ω and -ω). The result (in this case for 100% mod) varies in amplitude from 2Vc to zero. The mean carrier power is the same for all mod indices. Sideband power comes from the modulator power supply. `So the peak radiated power will be four times carrier power (i.e. twice carrier amplitude.
For the modulation to be linear (i.e. producing detected modulation signal that's proportional to the input) I don't think you can 'lose' any of the carrier power into the sideband components. The AM has to add mod power to achieve proper AM - or, you could say, Zero DC information?
Baluncore
Science Advisor

I think @artis would benefit from listening to an AM broadcast while watching the RF or IF on an oscilloscope and a spectrum analyser. That would quickly lead to an understanding of AM characteristics.


sophiecentaur said:
Your idea of "leakage" makes assumptions about the method whereby AM is achieved.

I agree. I am not interested in generating high power, only in the DDS of the IF waveform.
sophiecentaur
Science Advisor
Gold Member
2020 Award

Baluncore said:
I think @artis would benefit from listening to an AM broadcast while watching the RF or IF on an oscilloscope and a spectrum analyser.

I'm not sure why I introduced the modulation method into this. AM is AM, however it's generated. A dodgy modulator could produce distortion if the carrier amplitude dips near the peaks of the mod.
Baluncore
Science Advisor

Thanks.
DDS is following the Maths if it's to produce the right signal so it's really a bit of a red herring. You shouldn't be able to spot how the AM was generated. The carrier level would still remain constant.
It's great that everything at Audio and pretty much everything in Video can be done digitally. DSS is a branch of what I would have referred to as DSP (Digital Signal Processing), way back, when your laptop computer worked in MHz, rather than in many GHz.
Baluncore
Science Advisor

sophiecentaur said:
DSS is a branch of what I would have referred to as DSP (Digital Signal Processing), ...

sophiecentaur said:
I'm not sure why I introduced the modulation method into this. AM is AM, however it's generated.

But not when it is received and analysed.
You are making an assumption that the time window for the frequency analysis is an integer multiple of the period of both the carrier and of all the modulation frequencies present. With real signals that is almost certainly not the case, so there will always be a closure error where the ends of the sample are forced to meet. That closure error generates HF noise and a non-zero DC coefficient.

We employ a logarithmic musical scale based on the twelfth root of two, which is an irrational number guaranteed to foil the discrete analysis of any real signal worth the listening.
sophiecentaur
Science Advisor
Gold Member
2020 Award

Baluncore said:
But not when it is received and analysed.

I entirely see where you're coming from but we need to bear in mind the level of the thread. Your comments about receiving and analysis of a signal are fine but they actually apply - to some extent - to any measurement of any signal that we ever do. We always 'window' in time or frequency but the choices of timebase / bandwidth / triggerring etc. that we make should always be to give a meaningful answer.
I don't think that the artefacts which are caused by inappropriate use of a spectrum analyser, for instance, should interfere with the basic explanation of what happens with AM of a suitable carrier signal by a suitable modulating signal.
However, instructions about how to make best use of any equipment should include advice open how to interpret what is seen when complicated signals are involved.
artis

So when you say the carrier level doesn't change I then assume that is because of he way the signal is produced in the transmitter where a constant amplitude and frequency RF carrier from a high power oscillator is combined with a low frequency high power audio signal? I guess the question is how exactly the combining happens , does it happen by superimposing the two waveforms (RF carrier and audio) and then the interaction between the two produce a "distorted" carrier where even when the base signal is RF it's "distorted" envelope resembles the low frequency audio?


Now as for the sidebands, can they be compared to a half period of a simple sinewave waveform only here each half period consists of half the carrier + added modulated audio?

One thing I fail to see is how can both sidebands be symmetric and equal in time because the carrier frequency is much much higher than the modulated low frequency so lets say I have an audio track with irregular drum beats, would it not be the case that the USB's half period contains more modulated beats/information than the LSB's half period or time when the AM is in the LSB part of the spectrum and vice versa ?
sophiecentaur
Science Advisor
Gold Member
2020 Award

artis said:
then assume that is because of he way the signal is produced in the transmitter

If the transmitter is producing pure (linear`) Amplitude Modulation then the carrier level doesn't change. You could make an engine in which the carrier does vary in level but that wouldn't be the real thing. The definition of AM is a very simple one and it's not really up for argument or interpretation.

A(t) = C(t) (1+M(t))
where A(t) is the resulting AM, C(t) is the modulated signal (normally a sine wave) and M(t) is the modulating signal.
If you re-write that as
A(t) = C( t)+C(t)M(t)
you see a constant C(t) plus the product of C(t) and M(t). There is NO carrier frequency component in the signal C(t)M(t), which describes double sideband suppressed carrier AM.

This is how we define the AM process. If the carrier level is allowed to change with the modulation then the process is no longer linear and you will get, for instance, beats (intermodulation products) between the components of the modulation signal and possibly cross modulation in which the higher level modulating components will modulate the lower level components.

artis said:
Now as for the sidebands, can they be compared to a half period of a simple sinewave waveform only here each half period consists of half the carrier + added modulated audio?

This is meaningless and confusing, I'm afraid. There are no "half period" waveforms here. The shapes of the envelope are identical to the shape of the base band. Google will give you hundreds of hits in which the details of AM are explained at all levels. Just try Wiki and try not to make up your own interpretation of something that's as well established as the AM we all know and love.

Re-reading what you have written makes me think you may be trying to interpret the simple diagrams of an AM signal in terms of the positive and negative excursions of the carrier - don't go there or you would have to explain what the spectra of those strings of asymmetric half waves would be like and how that could possibly give a sensible answer.
Share:
Share

Why do you get sideband frequencies for amplitude modulation (AM)?
2

Questions regarding AM and FM

N
Help with understanding modulation in AM, FM and PM radio