Are almost all stars in the night sky brighter than the Sun?

Janus said:
right, 24. Though not really, check below)
Going over our lists, this is the comparison I got. Below Is my list. Blue represent stars with an absolute magnitude brighter than the Sun, and seems to match up with yours. The red highlighted stars are ones that are on my list but not yours (we used different designations for some stars, but I was able to cross-match.)
All 4 are dimmer than the Sun stars (which is Why I came up with 24 rather than 20; I didn't check my list of dimmer stars against yours.).

All were my mistakes of not noticing. Sorry about that.

This I have in my list just after 10 pc.
tony873004
Science Advisor
Gold Member

Here's an animation I made of a trip from the Sun to Orion.
notice how many dim stars fade into view and get passed before the familiar shape of the asterism begins to deform.
This implies that most close stars are too faint to be seen with the naked eye.

newjerseyrunner said:
That makes sense, while most of the stars in the universe are smaller and dimmer than the sun, the ones that are visible to us will obviously be brighter.

This is true, but not obvious.
To the contrary, it is a significant observation about Milky Way and solar neighbourhood.
Looking to the brightest stars...
Out of the 92 brightest stars of the sky, up to +2,50, all of them are brighter than Sun as mentioned. (Alpha Centauri B would be 21st if it were resolved, which it is not). In face, the brightest star in sky to be dimmer than Sun, Tau Ceti, is about 290th place.
Now, the nearest and dimmest of these 92 is Alpha Centauri AB.
6 of the 92 are within 25 ly of the Sun: Alpha Centauri, Sirius, Procyon, Altair, Vega, Fomalhaut.
The median distance, to 46th of the 92, is 170 ly.
The most distant 6, understandably at hard to know distances (too far for parallax) are over 1100 ly - the most distant being guessed to be Deneb Cygni estimated at 2600 ly.
If you look at the colour of these stars, the result is:
4 O stars
30 B stars
20 A stars
...making up 54 stars. All of these are massive young stars.
The remaining 38?
8 F stars, only 1 of which is arguably a dwarf
around 2 G stars, significantly double (Alpha Centauri and Capella)
and then about 20 K stars and 6 M stars, all of which are giants or supergiants.
Looking at distances again, 3 nearest giants are Pollux at 34 ly, Arcturus at 37 ly and Capella at 42 ly.
Then, within 100 ly of Earth, the 92 brightest stars include further 7 K and 1 M giant. The same distance, up to 100 ly, includes the 1 G dwarf, 1 arguable F dwarf (Procyon which may be subgiant), 1 F giant (Beta Cassiopeiae) - the rest are 16 A stars and 5 B stars.
What are these 11 nearby giants?
Capella is a double, so its masses are known - and happen to be big.
Whereas Arcturus, though single, is alleged to be low mass old stars.
Many of the remaining 9 simply have no mass alleged - understandably, as they are single.

I added the 4 additional stars that Janus found
Gliese 570
Gliese 783
BD+56 2966
Gliese 75
to the web page I previously posted
http://www.1728.org/starsvis.htm
So, if I have followed everything correctly, that should now be a list of 42 stars.
And since I was given the apparent magnitude and absolute magnitude, I calculated the distance for all of those stars.
The most distant star in that list is HD 4391 at 48.7 light years.
wolf1728
Gold Member

Okay, it seems that the list goes out to a distance of 48.7 light years. If we want to make this an inclusive list, we'd have to make sure that all stars up to 55.3 light years have been checked. (If any of you know of a URL where I could search, I'd be glad to research the list out to 55.3 light years).
Snorkack, in the "comments" column, the comment for 61 Cygni AB says that it is "the dimmest visible star". What exactly did you mean by that? Wouldn't the dimmest visible star be magnitude 6.0?
snorkack

It has the largest absolute magnitude of any star with visual magnitude under 6,0. All other visible stars are intrinsically brighter.
A complicating factor is that it is significantly binary. Addition of magnitudes is an inconvenient thing (raise to fractional power, add, then take a logarithm), so doing it by heart I preferred to round to one significant number and mentioned the approximateness in my list.
Check the distances to the binaries in my list. I systematically quoted the combined magnitude for apparent magnitude, because this is what eye sees (the binaries being not resolved by eye) and then the separate magnitudes for components (because this, like the true distance, is the truth out there).
wolf1728
Gold Member

In my list I added the comment "by absolute magnitude."
(Though I didn't mention this in the comments, 61 Cygni is significant for being the first star to have its distance accurately measured). (Bessel in 1838).
As far as the distances in the list, my only source was using the formula:
distance (parsecs) = 10^((m -M + 5)/5)
Janus
Staff Emeritus
Science Advisor
Insights Author
Gold Member

Here's a graphic I cobbled together that shows all the stars,including individual the members of multiple star systems( with the the exception of the "pup''(Sirius b) as it is too small to show up at the scale I used.) out to 6 parsecs.
Left to right is distance in parsecs. The blue vertical lines are absolute magnitude. The stars are shown to scale in size and the colors are their visible blackbody color. (or at least as close as I could get by converting star temp to RGB values)
I might try to continue it on past 6 parsecs, but I'm already running into information gaps. I had to quesstimate the radii of some of the smaller red dwarfs based on their temp and absolute magnitude as I couldn't find any sources that listed the information. As I try to move further out, I'm sure that this will become the case more often. 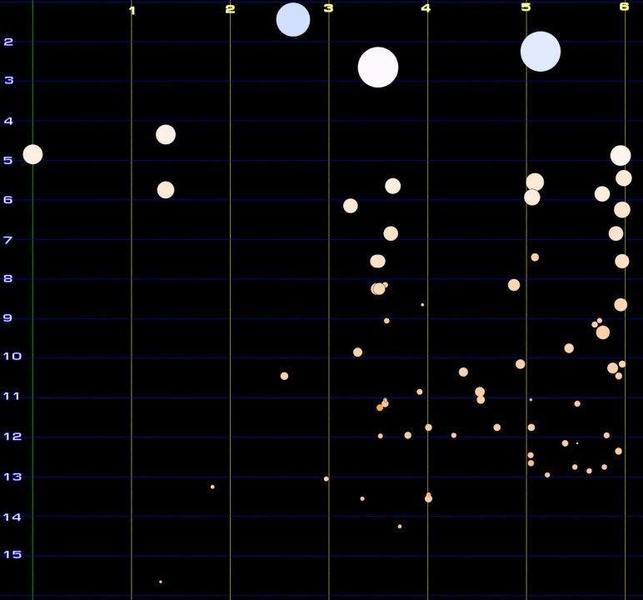 wolf1728 said:
(Though I didn't mention this in the comments, 61 Cygni is significant for being the first star to have its distance accurately measured). (Bessel in 1838).
As far as the distances in the list, my only source was using the formula:
distance (parsecs) = 10^((m -M + 5)/5)

Yes, but to the wrong magnitude.
The distance of 61 Cygni is 11,4 ly.
The visual magnitudes of components are +5,20 and +6,05, and the absolute ones +7,49 and +8,31 (I note errors in last numbers - these inconsistencies are common in quoted data). Since the components, with angular separation of 30 arc seconds, are not separated by eye, the combined magnitude is +4,8.
wolf1728
Gold Member

I changed the distance of 61 Cygni AB.
There are 42 stars in that list ending with a distance of 48.7 light years.
The limiting distance for a 4.85 absolute magnitude star to be visible is 55.3 light years.
Making an unscientific guess, if we were to extend that list to 55.3 light years, the number of stars would probably be less than 60.
Since there are about 6,000 stars that can be seen with the unaided eye, would it be safe to say that if you were to look at any star in the night sky, the probability would be greater than 99% that it is brighter than the Sun?
snorkack

I've extended my graphic out to 10 parsecs. The image is a bit large to insert into the post so I'll just give the link to the full-size image:
http://home.earthlink.net/~parvey/sitebuildercontent/sitebuilderpictures/starchart2.jpg
Janus
Staff Emeritus
Science Advisor
Insights Author
Gold Member

wolf1728 said:
Okay, it seems that the list goes out to a distance of 48.7 light years. If we want to make this an inclusive list, we'd have to make sure that all stars up to 55.3 light years have been checked. (If any of you know of a URL where I could search, I'd be glad to research the list out to 55.3 light years).
Snorkack, in the "comments" column, the comment for 61 Cygni AB says that it is "the dimmest visible star". What exactly did you mean by that? Wouldn't the dimmest visible star be magnitude 6.0?

Doing a query on VizieR, I came up with 144 stars within the distance where the Sun would be just visible at a visible magnitude of 6. of those 144, 44-47 have absolute magnitudes larger than the Sun*. This means that of the almost 6000 stars visible in the night sky by the unaided eye, only those 44-47 are less luminous than the Sun.

So, if there are only about 44 - 47 stars less luminous than the Sun (with an apparent magnitude brighter than 6), then the probability of seeing a star in the night sky that is intrinsically brighter than the Sun is greater than 99%.
Thanks to Janus for doing that research and the graphic and thanks to snorkack for researching those two lists of stars.
And thanks to everybody that helped!!!
snorkack

Janus said:
This means that of the almost 6000 stars visible in the night sky by the unaided eye,

This is a commonly quoted number; but from http://www.astronomycafe.net/qadir/q1257.html I see a different number.
Not a reliable source, though - giving 3 under 0,0.
Withertdm

Space. The final frontier. These are the voyages of the starship Enterprise. (Star Trek theme plays)
Log in or register to reply now!

Related Threads on Are almost all stars in the night sky brighter than the Sun?

Satellites in the night sky?

Insights How Representative is the Night Sky? - Comments

The Sky at Night Webcasts

Counting stars in the sky

Stargazing The Pleiades: an underrated glory of the night sky